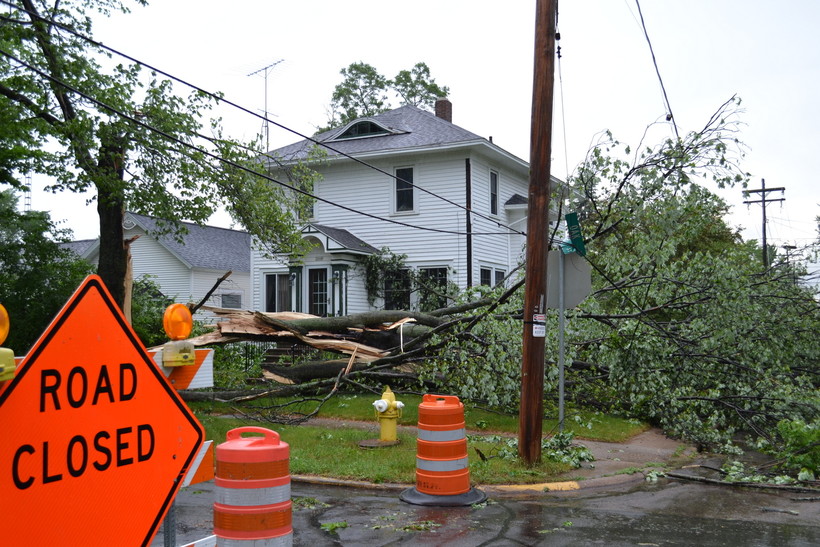 A tree took down power lines in front of the home of Nina Winkelman and her son Andrew Avery.

"When it rolled in, it hit really hard, right away," Wiza said as he stood in a drizzling rain. A second thunderstorm Tuesday morning was making it difficult for crews to clean up the mess from the night before.

"Trees down throughout the city, hundreds of trees, road closures, flooding, and we're going to be without power for a while," he said, shaking his head. "The priorities of course are getting roads cleared for emergency services. All of the life safety issues take top priority obviously, and then we'll get to the other things as we can."

At the corner of Reserve and Oak streets, Nina Winkelman and her 17-year-old son Andrew Avery looked at the uprooted tree that filled their entire front yard, taking down a snarl of twisted power lines as it fell.

"I have never seen anything quite like this at all. I have been living in Stevens Point off and on for the past 30 years, and I don't recall having a storm this bad," Winkelman said.

"It's kind of scary," Avery said. "It's dangerous. On both sides of our house, all the power lines are down."

Winkelman and Avery had to find shelter in another location Monday night.

More than 13,000 customer in Stevens Point were without power Tuesday morning. Mayor Wiza said it might take until Wednesday night to restore it for everyone.

In the meantime, the city was providing cooling shelters and free transportation on city buses.

Wiza said there was a bright spot to the situation: no one was seriously hurt.