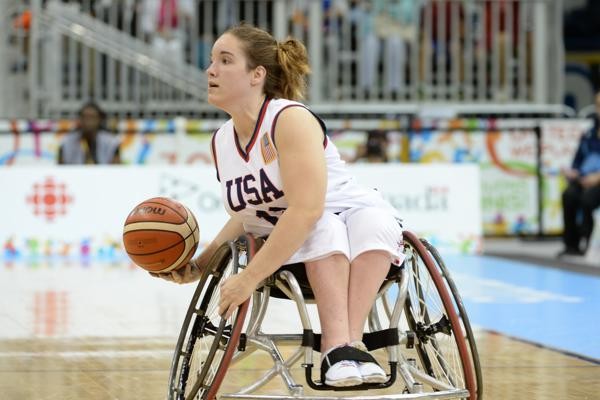 Murray Is One Of 13 Warhawks Alums Heading To Rio
By Erika Janik
Share:

And come September, the Germantown native will be taking to the basketball court in her third Paralympic Games.

When Murray was a child, her parents searched for an agency that offered wheelchair sports.

She started with street hockey but basketball stole her heart and came naturally to her.

"I liked the team aspect of that sport and being surrounded by other people into wheelchair basketball," Murray said.

When Murray was 11 years old, she started attending a University of Wisconsin-Whitewater wheelchair basketball camp. It was that camp that solidified her drive to pursue her sport on the elite level.

"It really opened my world to see the other paralympians and to see what I could do with wheelchair basketball," explained Murray.

Murray played college basketball for the UW-Whitewater Warhawks and was twice named the Women’s College Player of the Year. While at UW-Whitewater, the women’s team won national championships three years in a row.

The school is a powerhouse in wheelchair basketball. Murray is one of 13 Warhawk alumni headed to the Paralympics in Rio this year.

"I go to work and after work I go to the gym and do my shooting workout and conditioning," she said. "We're also required to lift three days a week. It's pretty intense."

From being one of the youngest, Murray is now a veteran on Team USA, and this summer's Paralympics may be her last.

"I'm ready to move on and really focus on my career," Murray said. "I want to become an adoption specialist."

She won't stop playing basketball, though.

"Even though I might be done with USA, I plan to still play for the local teams to fulfill the competitiveness in me," Murray said.

The Rio Paralympics start Sept. 7 and run through Sept. 18.