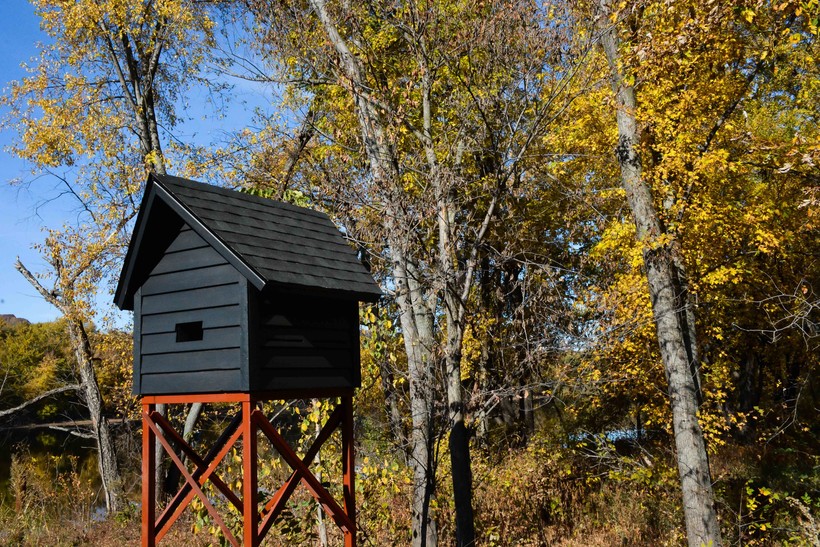 This bat condo below the Interstate 90 bridge reconstruction near Dresbach, Minnesota, will house up to 4,000 bats.

Thousands Of Bats Living Beneath Interstate Bridge Are Getting New Homes

Threats Of White Nose Syndrome Make It Important To Give The Bats A Place To Go As Bridge Is Replaced
By Hope Kirwan
Share:

As construction continues on the new Interstate 90 bridge to Minnesota, officials with the Wisconsin Department of Natural Resources are working with the Department of Transportation and Minnesota agencies to accommodate a large colony of bats living under the old bridge.

For six months out of the year, about 3,000 bats live under the old I-90 bridge, which is scheduled to be torn down starting in 2016. According to DNR officials, these bats make up the largest recorded colony in the state.

Right now, the colony has relocated for the winter, hibernating in caves and mines until April.

DNR conservation biologist Heather Kaarakka said it’s the perfect time to install alternative habitats for the bats to return to in the spring.

"Hopefully, once they remove that bridge, they'll remove the roosting opportunity for them and they'll have discovered and start using the new bat houses," said Kaarakka.

Mike Doughtery, public affairs coordinator for Minnesota Department of Transportation, said the bats were first discovered during a routine bridge inspection in 2013.

"As we were moving towards the construction of the new river crossing at Dresbach to replace the current I-90 bridge, (the bats) just kind of got factored into the planning," Doughtery said.

Kaarakka said it’s become even more important to protect these bats because of the dangers of white nose syndrome.

"It’s a fungal disease which causes mass mortality in hibernating bats such as the Little Brown Bats that are roosting under the bridge," Kaarakka said. "It's estimated that about 6 million bats have died (in the U.S.) since the disease was first discovered in 2006."

There’s no guarantee that the bats will choose to make the new bat houses their home, but Doughtery said officials with the Minnesota Department of Transportation are hopeful the new bridge will not disrupt the colony too much.

"When we do these projects, we try to minimize the disruption to the natural area as much as possible," Doughtery said.

DNR officials installed six bat bunkers, which house 500 bats each, and a bat condo, which can hold up to 4,000 bats, along the river near the old bridge.