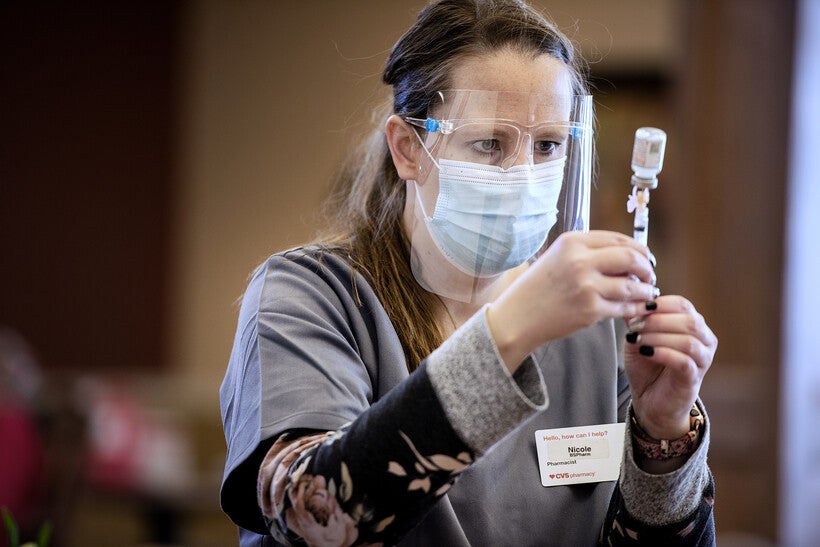 In Setting Vaccine Order, State Has Not Prioritized Underlying Health Of Those Under Age 65
By Rob Mentzer
Updated:
Monday, March 1, 2021, 1:05pm
Share:

Sherie Kristie has lost 30 percent of her lung capacity to pulmonary fibrosis, a progressive disease that permanently scars and damages the lungs. The 61-year-old engineer doesn't have a job she can do from home, and she knows contracting COVID-19 could be deadly for her.

She's spent the last year taking every precaution she can and "living in pretty depressing isolation," she said. The promise of a COVID-19 vaccine is that, once she's vaccinated, Kristie could again meet up with friends or see family in person. And it would lessen the low-grade worry she faces every time she has to go out for routine things like work or an errand.

But Kristie , who lives in Hudson, isn't eligible for the vaccine in Wisconsin. And she doesn't know when she will be.

Beginning this week, Wisconsin has opened vaccine eligibility to a broad group of essential workers that includes all of the state's educators — teachers, teacher aides and child care professionals — as well as bus drivers, grocery workers and others. The state has completed vaccinations of most frontline health care workers, and more than half of the state's seniors have received at least one dose of vaccine. But Wisconsinites with chronic health conditions are not prioritized — despite the fact that, like Kristie, some of them are at especially high risk of serious health complications or death if they were to get sick.

"If I get this disease, my odds aren't so good, compared to a regular person," Kristie said. "In fact, I'm pretty sure that most people ages 65 and up have better odds than I do."

In leaving those with chronic conditions until later, the state committee that set Wisconsin's vaccine priority order departed from the guidance issued last year by the federal Centers for Disease Control and Prevention. That guidance said people age 16 to 64 with "underlying medical conditions which increase the risk of serious, life-threatening complications from COVID-19" should be prioritized at the same time as most essential workers and people 65 and older. (A spokesperson for the state Department of Health Services on Monday said the state moved those 65 and older forward in the priority list — from the CDC's Phase 1c to Phase 1b — but did not deprioritize those with chronic conditions).

The fact that Wisconsin hasn't made them a priority is a source of deep frustration and anger for people across the state whose conditions put them at serious risk of complications or death from COVID-19. Kristie was one of several people who used WPR's WHYsconsin to ask why the state has left people like them out.

Bruce Nerge, of Janesville, is 64; he misses the state's 65-and-older cutoff by about eight months. He has Type 2 diabetes and a lung abnormality that has reduced his breathing capacity. He calls the state's decision not to prioritize those with chronic conditions "morally reprehensible."

"I'm so angry when I see people who are young and healthy" getting the vaccine, Nerge said. "And the people who would more than likely be in intensive care or die from this — the DHS has completely forgotten us. It's appalling."

In Wisconsin, close to 90 percent of deaths from COVID-19 have been among people 65 years old or older. The risk of mortality was one of the most important factors the state considered when it determined vaccine order, said Julie Willems Van Dijk, deputy secretary of the state Department of Health Services.

"But then they also considered risk of exposure, and what groups also posed a risk of ... spreading to other people," Willems Van Dijk said. Since grocery workers, educators and transit workers all have public-facing jobs that could involve being exposed to and potentially transmitting the virus to others, the state chose to prioritize them.

Another complicating factor is the sheer number of people who could be defined as having a chronic health condition. For example, about one-third of Wisconsin adults are obese, a chronic condition that worsens patients' outcomes from COVID-19. But that's nearly 1.5 million adults. And while vaccine supplies have ramped up in recent weeks, they're still well below demand for the shots in all sorts of populations.

Nerge doesn't buy the state's official explanation. He thinks the emphasis should be on people who are at highest risk of serious health complications. And like others interviewed for this story, he sees politics in some decisions made by Gov. Tony Evers' administration. The state has said it will give next vaccine priority to educators, a large and politically active group, as it continues to vaccinate those 65 and older and other eligible groups. 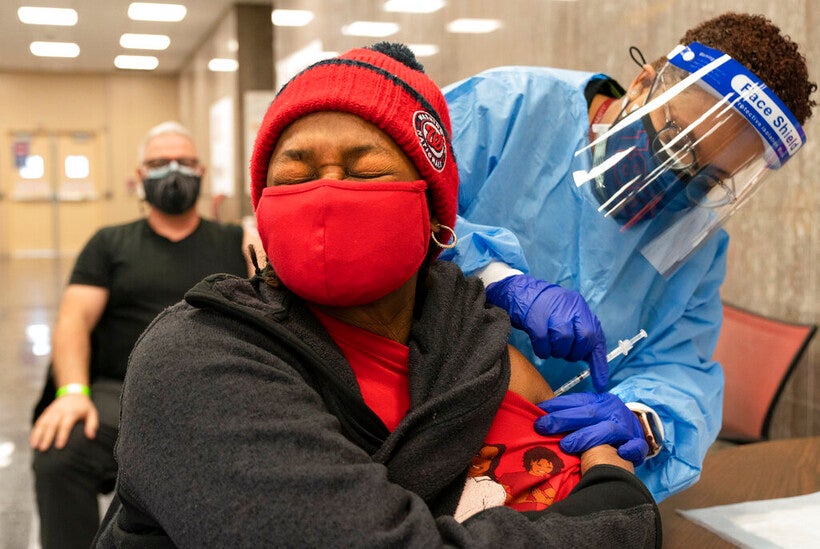 Jorie Winbish, 56, of Washington, reacts as she receives her second dose of the COVID-19 vaccine at a clinic at Howard University, in Washington, February 11, 2021. "I feel so lucky to have number two in my arm," says Winbish. Jacquelyn Martin/AP Photo

Sarabeth LeMoine, 61, of Madison, is a survivor of Hodgkin's lymphoma and breast cancer. She read the CDC recommendations when they came out, and was excited to think something closer to normalcy could be close at hand. Now, she doesn't know when to expect it.

"It makes me nervous that I may not get the vaccine until summer, or later," she said.

Nerge and Kristie have called their own political representatives to share their frustrations. LeMoine said she is going to "try to wait as patiently as I can."

Willems Van Dijk said the state is not likely to change eligibility for the current phase, but that vaccine supply will determine when it further opens eligibility to new groups, including those with chronic conditions.

That leaves those whose health conditions put them at particular risk stuck in the same limbo they've faced for the last year.

Kristie has a beloved aunt in her mid-80s who lives in Oregon. She's been vaccinated against COVID-19, but she's frail, with heart problems.

"If I were safe to fly, I would get on a plane tomorrow" to visit her, Kristie said. But that's not possible until Kristie gets vaccinated, too, and it's one reason why having people in her position passed over by the state is so frustrating.

"I'm trying not to overreact," Kristie said. "I just want the damn shot."

Editor's note: This story has been updated to correct the spelling of Sherie Kristie's last name.