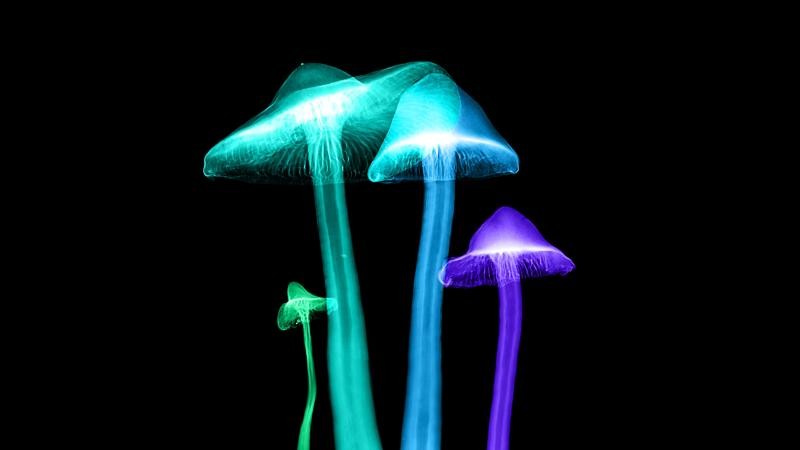 They eat rocks. They're some of the strangest living beings on the planet. They are fungi.

Biologist Merlin Sheldrake on the mind-bending world of mushrooms and beyond
By Mark Riechers
Share:

The fungal world is mind-bending. Mushrooms may look like plants, but taxonomically, fungi are more closely related to animals.

They go inside their food to eat it and "play games with individuality," said biologist Merlin Sheldrake, author of "Entangled Life." One underground fungal network in Oregon spreads over four square miles, but genetically, it’s a single organism.

As Sheldrake said, "they are everywhere at once and nowhere in particular."

What's astonishing is how ubiquitous they are. There are 2.2 million to 3.8 million species on the planet — six times the number of plants on Earth — and only 8 percent have even been identified.

"I think that really neatly summarizes our ignorance," said Sheldrake, speaking to Steve Paulson for "To the Best of Our Knowledge."

Fungi are inside you and around you. They're eating rock, making soil, digesting pollutants, nourishing — and killing — plants, producing foods, making medicines, manipulating animal behavior, and influencing the composition of the Earth's atmosphere. 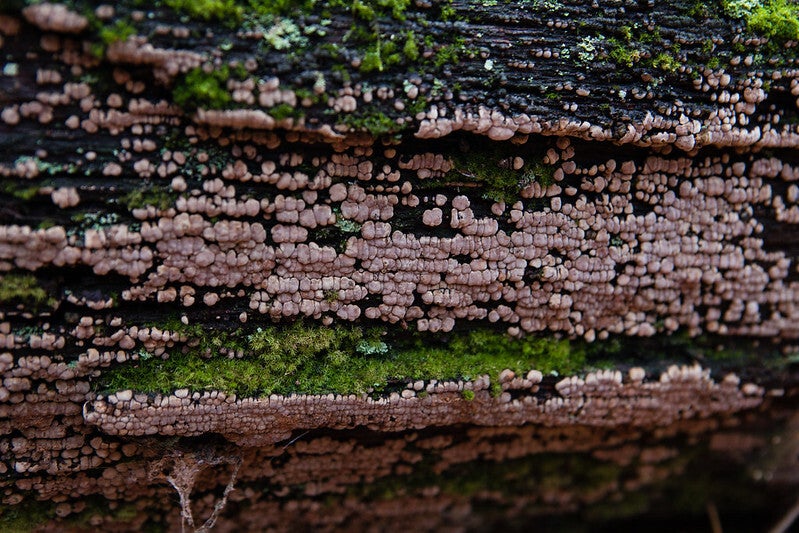 Ceramic parchment, a wood-eating fungus, grows on a fallen tree at the Ned Smith Center for Nature and Art near Millersburg, Pa., on Oct. 28, 2016. Fungi play a major role in regenerating the forest by digesting fallen trees and plant matter, effectively recycling the nutrients back into the soil. Chesapeake Bay Program (CC BY-NC 2.0)

Sheldrake is a tropical biologist, an avid fermenter and brewer, and very much a big-picture thinker. He says the fungal world challenges a lot of our preconceptions about what form a living organism can take.

This interview has been edited for clarity and brevity. The conversation was originally featured as part of the Kinship series from "To the Best of Our Knowledge" and the Center for Humans and Nature.

My father proposed an experiment where we got a plastic bottle and cut off the top. We put in layers of soil and sand and dead leaves, and then added some earthworms.Through the side of the bottle, these layers — which were initially very distinct, with sharp edges — you could see them starting to mix and blend into one another. He explained that this process of mixing and blending was being conducted by worms, but there were creatures smaller than worms — very much smaller than worms — that did similar things. This really helped me to get a sense of what was going on in my leaf piles.

Fungi are a big kingdom — as Sheldrake says, 'There are lots of ways to be a fungus.' And we're more closely related to them than plants are.

MS: A very small number of fungal species produce mushrooms, which are the fruiting bodies of fungi, the place where they make spores in order to disperse themselves — a bit like how plants make seeds. Most fungi live their lives as mycelium, which are branching, fusing networks of tubular cells. That's how fungi feed. 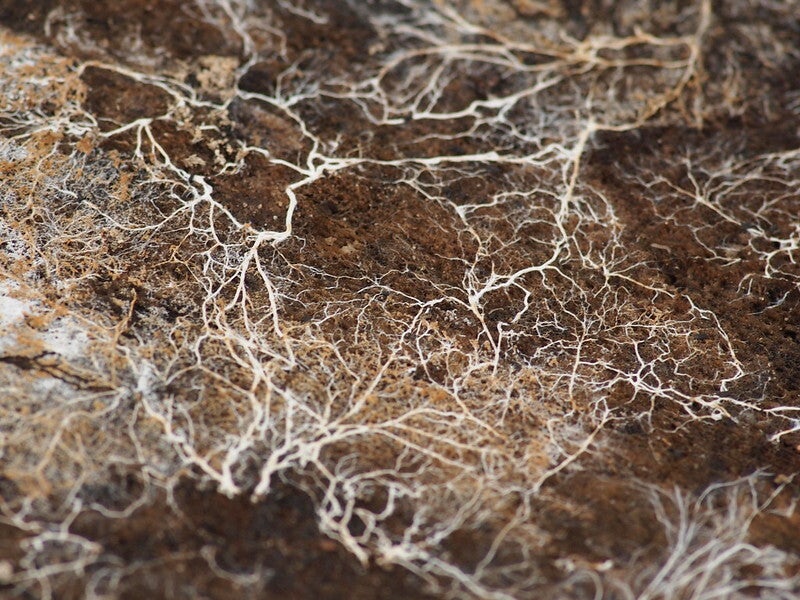 So they're not like plants in the sense that plants photosynthesize and make their own energy from sunlight and carbon dioxide. They're more like animals in their nutritional strategy. They have to find food in the world.

An animal like us might find some food and put it inside their body, but a fungus will put their body inside the food. To do this, they grow as these very flexible, fluid networks called mycelial networks. This allows them to tunnel into their food source, upon which they secrete digestive enzymes and then absorb the digestive surroundings into themselves.

Fungi can digest very recalcitrant materials. There are wonderful studies which show the traces left behind on minerals as fungi have etched their way into these rocks. You can see the grooves left behind after they have had their way with these minerals and rocks.

But if they're so different, why do fungi look like plants?

MS: Fungi were actually considered to be plants until in the 1960s, when they won their independence, taxonomically speaking, and they were recognized as a distinct kingdom. I think they've been lumped in with plants because they share some characteristics — they tend to grow places rather than go places, as an animal might. They have a vegetative lifestyle, and you could mistake the mycelial network for an entangled system of roots.

Fungi face similar challenges as organisms that don't run around with motile bodies.

For example, as with a plant, it would make no sense to have a brain, as an animal does — you'd be very vulnerable to a herbivore coming in and just eating it. So plants, like fungi, tend to have very decentralized bodies where things can regenerate very easily. You can destroy 99 percent of a fungal network — just take 1 percent — and it can regenerate a whole new network. There's a great flexibility that comes from their sedentary lifestyles.

What does it mean for a living creature to 'play games with individuality?'

MS: Humans are relatively straightforward to detect as individuals because we have a body that's separate from other bodies. But fungi really play games with this because you can divide a mycelial network in two, and then you have two mycelial networks, but they will be genetically identical. So are those two individuals? Is that one individual divided in two? Different networks can fuse, and their genetic contents can mingle, making it difficult to define an individual on genetic grounds.

So when it comes to these really large fungal networks — like the networks of Armillaria in Oregon — it's a bit like paternity testing or forensics, looking at genetic fingerprints.

It would be possible, for example, to take lots of different samples of this network at different points within this area, and you could find that it was all genetically identical, but you could also imagine a situation where part of the network had been severed from other parts of the network. Then you'd have to do some soul-searching about whether that counted as the same.

These really large organisms — rather like the enormous networks of clonal seagrasses, or aspens — this is such a different way of being from humans.

MS: Intelligence involves information processing, making decisions, choosing between alternative courses of action, and adjusting to one's environment. I would think of a fungal network as intelligent in the sense that they're able to respond to their surroundings and to change their behavior in ways that are important for them. 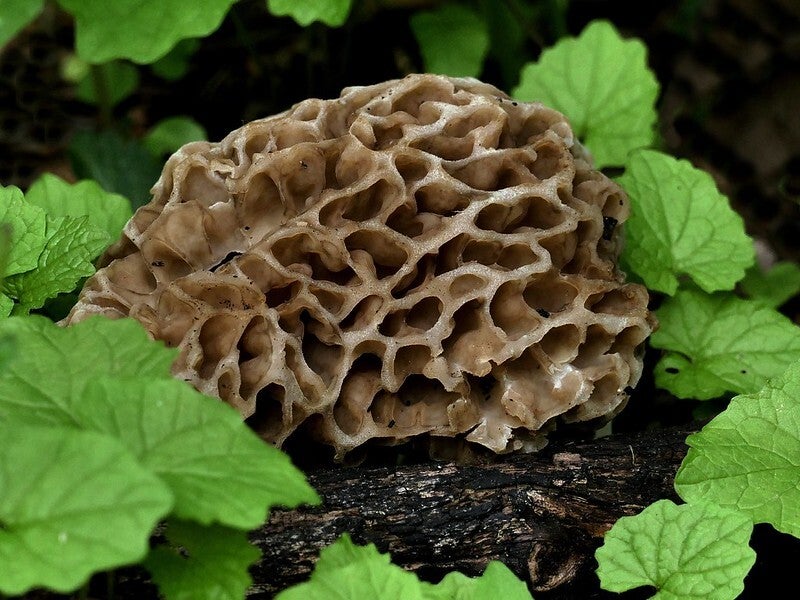 Fungi can control the flow of material through their networks. If you think about a mushroom growing, that's a hydraulic feat — it's this water flowing into an area of a fungal network to inflate the mushroom with water. In a forest, a fungus is connected to multiple plant partners. The fungus can shift a bit of nutrients over here to support this plant that might be sickening, or shift this signaling compound over there to a plant that might not yet have been exposed to a pest.

Can you imagine the world as if you were a fungus?

Imagine that you are a network, and one part of you is growing inside the roots of a plant — inside the cells of a plant, engaged in a very intimate cellular molecular dialogue with this plant, producing plant growth hormones that change plant behavior. And plants are producing fungal growth hormones that can change fungal behavior. That's just one little part of you. Then another part of you is growing into another plant root — in fact, maybe 200 little branches of your network are growing into different roots of the same plants, or in different plants, all of which will be experiencing slightly different conditions at different moments in time. But they're all connected.

Somehow, there's a lot of experience going on while being in all of these different places at once.

I think of our minds as being like fungal networks, because our minds work in nonlinear, parallel ways. If you could draw a portrait of the mind, I think it would look something like a fungal network — mind maps certainly do.

Fungi are crucial players in the kitchen — even before we knew they were there.

MS: I find fermentation to be a really helpful way to get a new perspective on ecology. If you were doing a lacto-ferment with just a simple sauerkraut, for example, this is not just one type of microbe that's undertaking this process. It's an ecological succession, and you can then taste the chemical transformation with your own mouth. Every three or four days, you can taste how this is changing over time. It's a reminder that the whole biosphere is made up of ecological cycles — some fast, some slow — as chemical transformation is taking place.

Yeast is another fungus, but yeast doesn't do its work all by itself — there are other bacterial populations. And there are many different types of yeast. Yeast were only described as a biological organism in the 19th century, and yet humans have worked with yeast for an unknowably long time. In these old brewing recipes, yeast were a silent companion. They were an invisible participant in human culture.

What are the best ways to get up close and personal with fungi?

MS: Growing mushrooms is a great way to get a better feel for fungi. They grow so fast — you can almost watch them grow. And mushroom grow kits are readily available. You can just spread them with water and then you can watch these forms erupt over the course of a few days. Then you can eat them, of course, which is a great way to do it