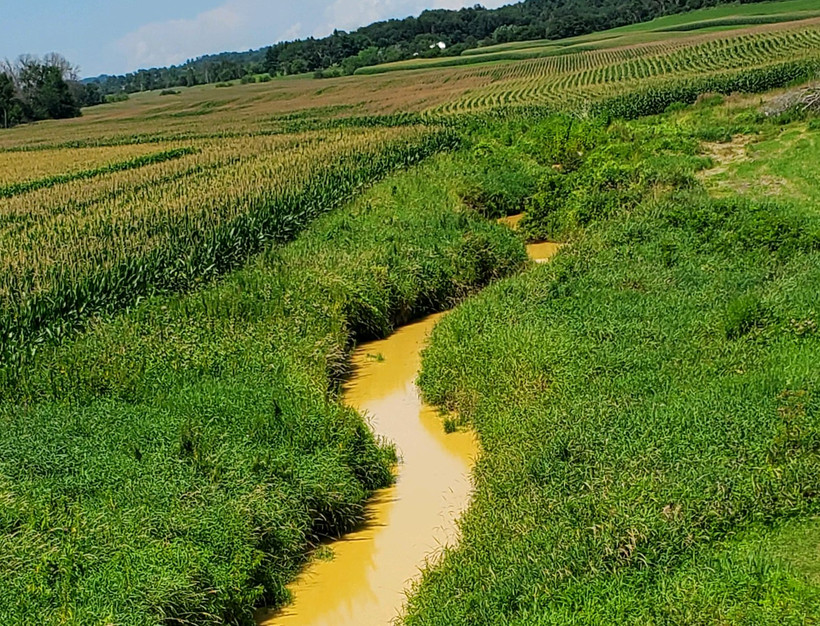 The Wisconsin Proppants LLC mine in Jackson County spilled up to 400,000 gallons of muddy water into the Curran Coulee Creek sometime during the morning of Saturday Aug. 3, 2019. Photo courtesy of Town of Curran Board Chair Dwight Swenson

Water samples taken after a Jackson County frac sand mine spilled up to 400,000 gallons of muddy water showed elevated levels of heavy metals in a creek days after the accident. But testing by the Wisconsin Department of Natural Resources shows metal concentrations well below state toxicity standards.

Elevated levels of cadmium, chromium, copper, lead, nickel and zinc were found in surface water samples taken where a slurry of water and fine sediment from the Wisconsin Proppants LLC mine in the Town of Curran entered the Curran Coulee Creek sometime during the morning of Saturday, Aug. 3.

DNR investigators said the spill happened when a pump moving water between holding ponds began sucking up mud instead. That caused the water and sediment to overflow and leak into nearby wetlands and the creek, which feeds the Trempeauleau River.

Water samples were taken by the DNR on Aug. 5, and results show elevated levels of heavy metals. But DNR toxicologist Meghan Williams said the agency used the "most protective" surface water quality standards in state statute to determine whether any of the metals posed health hazards.

"The bottom line is that the concentrations that were measured in the samples were not a risk to aquatic life or human health," said Williams.

Aluminum concentrations at the spill site were more than 17 times higher than creek samples taken up stream of where the sediment entered the waterway. The DNR testing report says there are no applicable standards for aluminum in surface water.

Aluminum and the other metals found in the water and sediment are naturally occurring in the sandstone formations being mined according to study conducted by Wisconsin Geological and Historical Survey. 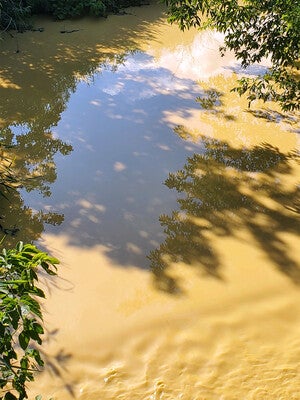 The spill caused the water and sediment to overflow and leak into nearby wetlands and the Curran Coulee Creek, which feeds the Trempeauleau River. Photo couresty of Town of Curran Board Chair Dwight Swenson

When asked if the DNR had any concerns about water samples being taken two days after the spill from the Wisconsin Proppants mine, Williams said the results suggest the metals dissipated quickly and did not pose health risks.

"Directly after the spill you might expect there to be higher concentrations because that’s right when the release happens," said Williams. "But I think given the fact that even two days later the concentrations are so much farther below any of the values we’d be concerned about means that the exposure window is really short."

Last year, a mine owned by Hi-Crush Proppants in Trempealeau County released 10 million gallons of water and sediment in order to save a worker whose bulldozer had become trapped underwater in a holding pond. Test results from that spill showed much higher concentrations of metals. The DNR didn’t issue any citations to Hi-Crush because it said state statute allows water quality standards to be bypassed during life-saving measures.