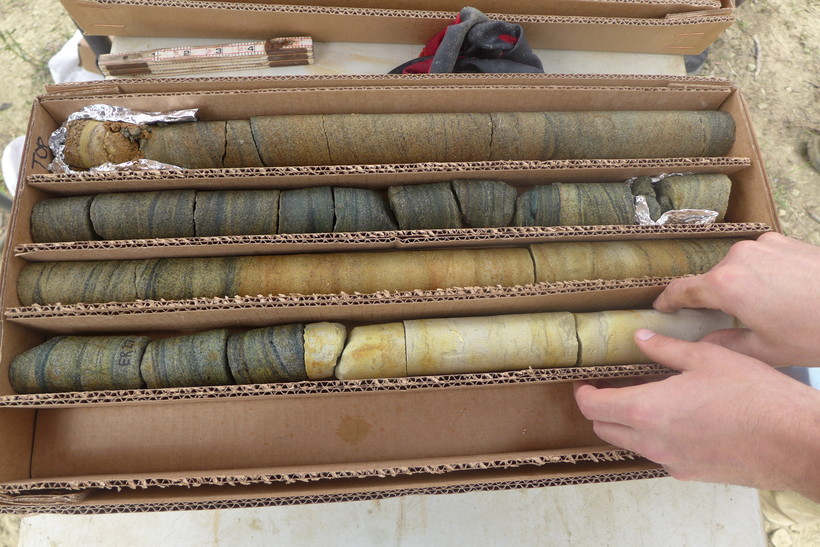 Segments of a rock core collected just outside the City of Arcadia in Trempealeau County are cataloged by geologists with the Wisconsin Geological and Natural History Survey.

Now, the Department of Natural Resources is planning a study to see if the metal from those ponds is leaching from mines and polluting groundwater. But two similar studies are already underway aimed at better understanding what’s in the region's water and the sand that's mined there.

Areas like a section of land outside the city of Arcadia where the Tunnel City and Wonewoc sandstone formations meet are especially rich in minerals containing heavy metals, according to Wisconsin Geological and Historical Survey geologist Jay Zambito.

The minerals are what keep metals locked inside the rock formations, Zambito said. His theory is that when miners break the rock up, the minerals might dissolve.

When the DNR sampled water used by companies to wash frac sand in 2013, it didn't answer the question of whether metals from mines are contaminating water.

They found aluminum concentrations 178 times higher than state standards along with lead and manganese levels four times what the agency recommends for groundwater. But the water was cloudy with sediment and researchers couldn't tell if those metals were in the sediment or the water itself.

DNR frac sand specialist Roberta Walls said that's why they're moving forward with a comprehensive groundwater study next year, which could be finished in time for a review of sand mining water pollution permits.

"Given the way studies are formulated and analyzed, it’s likely that the study would be prepared and ready to go for a review of the next permit issuance but we do have the ability to make changes to the existing if necessary in between." Walls said.

The next DNR review of industrial sand mining water permits is scheduled for 2021.

But for residents living near frac sand mines, that timeline offers little comfort. Midwest Environmental Advocates attorney Sara Geers says she hears from residents that they're worried metals could be getting into their well water now.

High concentrations of metals have been shown to cause brain and nerve damage. That's why she said answers can't come soon enough.

"For the citizens who rely on groundwater for drinking, for people who fish in the streams around these facilities, it’s not good enough to say, 'we’re looking into it and we may tell you a few years down the road that, indeed, this facility has been polluting water for the past several years,'" Geers said.

University of Wisconsin-Eau Claire geology professor Brian Mahoney, though, says worries about heavy metals in groundwater may be overblown. For the past year he and his students have been sampling rivers and municipal wells in western Wisconsin for heavy metals. So far, the levels are well below drinking water standards.

"So, it doesn’t seem as if there’s a lot of material coming off the rock, getting into the groundwater," Mahoney said. "Some certainly but not very much."

Mahoney wants to test the rock itself to see if exposing it to air and weather could cause metals to bleed from exposed sandstone. But he said that kind of science is expensive and he's looking for funding.

"Ideally it would be the DNR. It could be the Wisconsin Geological and Natural History Survey, could be the state Legislature, just to remove any appearance of industry influence on the project whatsoever," said Mahoney.

This summer, the DNR began requiring some frac sand mines to test for trace metals in water they discharge into nearby streams. The Wisconsin Industrial Sand Association says that has cost operators tens of thousands of dollars even though there's no proof what they do is causing metals to leach from the state's hillsides into our groundwater.