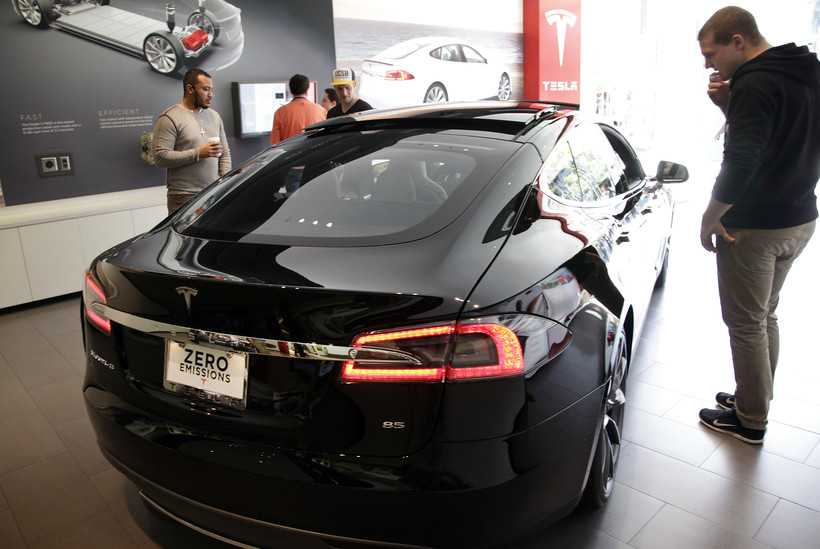 In this Jan. 3, 2015 photo, people check out the Tesla model S at the Tesla showroom at the Third Street Promenade in Santa Monica, California. Richard Vogel/AP Photo

Proposal Would Allow Tesla To Sell Directly To Consumers In Wisconsin
By Laurel White
Share:

Lawmakers heard testimony Tuesday on a proposal that would allow electric car manufacturer Tesla to open dealerships and sell directly to consumers in Wisconsin.

Supporters of the measure argue allowing Tesla to set up dealerships in Wisconsin will boost the state’s economy by creating jobs and generating sales tax revenue.

"Tesla, a Fortune 500 company that wants to come to the state and do business here, is not allowed to do business in this state because of the laws that we have," said Sen. Chris Kapenga, R-Delafield, one of the bill’s sponsors.

But opponents argue the change would hurt car dealerships in Wisconsin, by opening up the possibility for manufacturers to bypass them. The proposal would allow any vehicle manufacturer that produces only electric cars to sell directly to consumers.

Some major manufacturers, like Volvo, have expressed interest in transitioning all of their vehicles away from combustion engines to electric power in the coming years.

"That system will continue to exist with this bill," said Jonathan Chang, vice president of legal affairs at Tesla. "But the franchise laws should not be used to block innovation or job creation from new companies entering the free market."