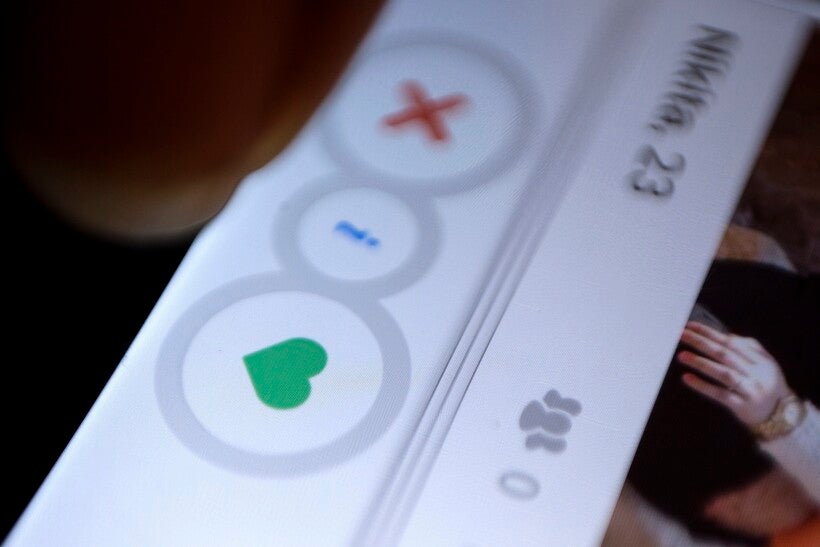 In this July 5, 2015, file photo, a man uses the dating app Tinder. Spotify and the makers of Fortnite and Tinder are taking on Apple as part of a coalition calling for "fair treatment" in the way the tech giant runs its app store. The Coalition for App Fairness advocates for legal and regulatory changes. Tsering Topgyal/AP Photo

Swiped Out: The Darker Side Of Dating Apps

Journalist, Film Director Nancy Jo Sales On The Gauntlet Of Dating In The Digital Age
By Adam Friedrich
Share:

Journalist Nancy Jo Sales has long been the foremost authority on how the advent of online life has impacted our dating one.

In addition to her New York Times bestselling book, "American Girls: Social Media and the Secret Lives of Teenagers," Sales directed the 2018 companion documentary film for HBO, "Swiped: Hooking Up in the Digital Age."

The film was a fascinating exploration of how the accessibility and prominence of dating apps is rewiring our cultural approach to sex and dating. It also critiqued the more nefarious motives behind a lot of these apps in how they turn a search for love into a profitable addiction.

"It's designed to be addictive almost immediately when you start using the app. And I did an interview with Jonathan Badeen, who's one of the co-founders of Tinder, and he spoke very openly and almost proudly about the fact that it was very addictive and that they designed it to be addictive," Sales told WPR's "BETA."

Her latest book on the subject turns inward and reflects on her own journey through the emotional gauntlet of dating apps. It's called, "Nothing Personal: My Secret Life in the Dating App Inferno."

"I did get addicted," Sales admitted. "But, that's really no different from anyone who uses the app. And that's kind of the point I was trying to make. You might not even notice that you are or realize that you are, but what do you call it when you are swiping on an app for hours a day or at least hours a week? I mean, one survey said that people ages 18 to 35 swipe on dating apps up to 10 hours a week."

In most cases, the only relationship a user ends up finding is the one with the app itself. Sales says that's the business model.

"The actual business model is to get you to engage perpetually and as often as possible with the app itself," she said. "Use and usage is what drives these companies and in all of social media, actually. The numbers! They need to get more and more and more and more numbers, which leaves less time for actually meeting people, talking to people, engaging with people in person."

The addictive properties of dating apps like Tinder, Bumble and Hinge is just the beginning. There's also something more sinister at play.

"I think one of the biggest concerns is that it's a bad faith proposition in terms of the companies," Sales said. "What they're marketing to people is different from what the apps are doing to people who use them. And they know this. I mean, they're the ones who designed them."

Sales says these companies horde loads of data from internal surveys and app usage reports. Additionally, there's outside information compiled by the like of Pew Research. She says it highlights the dichotomy of the promise versus the reality of these apps.

"We know that the majority of women on dating apps will see an unsolicited nude image, and that's something that women have already been conditioned to be accepting of as part of dating. But it's outrageous and it's actually a crime in many places," Sales said. "There's a huge problem with dating apps and sexual assault that is so under discussed."

Furthermore, these apps and their algorithms strongly tend to reinforce racial and other biases.

"The algorithms are your matchmaker. What the algorithms do is if you swipe on certain people, they show you more people like that. They tend to reinforce racism, racial preferences in dating," Sales said.

"A person of color can go on a dating app and see in the profile of someone who might come up in their feed, something racist. People also are ableist on these apps and they are fat shaming. So that's the non-algorithmic way that this goes down," Sales said.

Sales isn't overly optimistic that these apps will evolve out of altruism. She does point out that there was a congressional investigation into the age checking on these apps, which they don't have. Sales feels political influence will likely be the only motivator for real, substantive change in these companies.

"I don't think they're going to change until there's real pressure on them to change. I really think that politicians have to get involved," she said. "There needs to be a serious investigation of this industry. And politicians need to act to protect users because the dating apps will not do it."