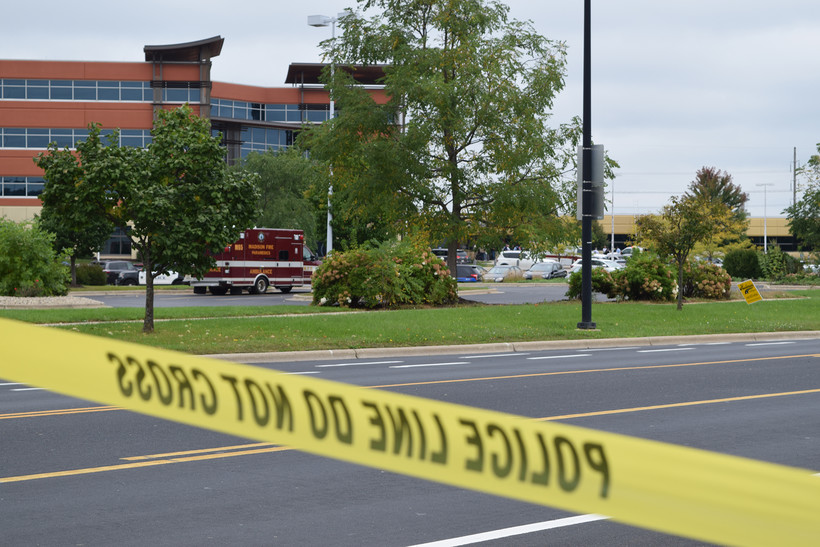 4 Others Injured In Wednesday Morning Shooting
By WPR Staff
Share:

Few details emerged late Wednesday afternoon about the man who opened fire at a software company Wednesday morning in Middleton.

The man — who was shot by four officers at WTS Paradigm and later died at UW Health University Hospital — was identified only as a WTS Paradigm employee and a Madison resident by Middleton Police Chief Charles Foulke.

His identity has not been released by the Dane County Medical Examiner's Office because it's pending family notification, Foulke said at a 4 p.m. press conference.

The chief shared no other personal details about the man except that he did not have a criminal record or previous contact with law enforcement.

Prompted by a reporter's statement that witnesses said the man sat at his desk and then opened fire, Foulke said he did not know how long the suspect had been at work before the shooting happened in the WTS Paradigm offices.

"I know he worked there and he was allowed to be in that building," Foulke said. "So did he walk in and start shooting or had he sat there for an hour? Speculation on my part, I don’t know." 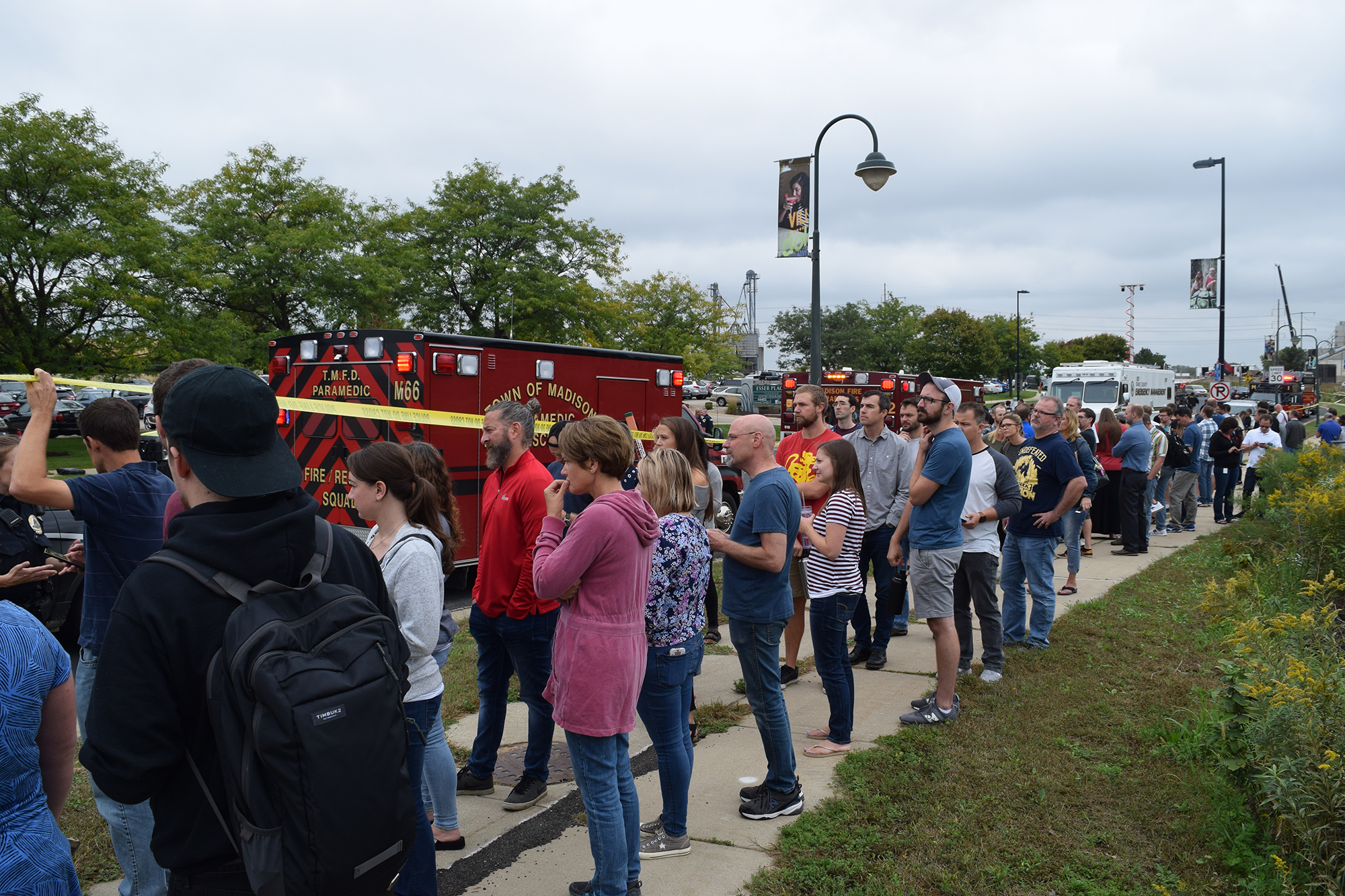 Witnesses of Wednesday’s active shooter situation outside of the scene. John K. Wilson

The police department was notified at 10:26 a.m. of an active shooter at the software company located in a small business park at 1850 Deming Way. Officers were on scene at 10:29 a.m. and made contact with the suspect at 10:34 a.m., Foulke said.

The man, who Foulke said was "heavily armed with a lot of extra ammunition, a lot of extra magazines," was shot by two Dane County Sheriff's Office deputies and two Middleton Police officers inside the building. The suspect did fire at officers, the chief said.

The man, armed with a semi-automatic pistol, was shot after he severely injured three other people in the office. A fourth person received non-life-threatening injuries after being grazed with a bullet. All four have been taken to local hospitals.

The three people seriously injured by the shooter are at UW Hospital. Two are in serious condition and one is in critical condition, said Lisa Brunette, a spokesman for UW Health.

Kim Sveum, a spokeswoman for St. Mary's Hospital in Madison, told WPR they are treating one patient with non-life-threatening injuries.

"I can tell you that he was an employee there, so it wasn’t unusual for him to be in there," Foulke said. "He had a reason to be there, but anything else beyond that, I don't know and it would just be speculation on my part if there was any type of issues going on between he and employees, we just don’t know that."

"I don’t have a lot of answers," Foulke said, adding that witness interviews and evidence collection are still underway, and that law enforcement is following leads.

The names of the officers involved and those wounded have not been released.

The building was evacuated after the shooting and declared safe just before another press conference around 1:15 p.m. where Foulke said there is one suspect and no further danger to the public. 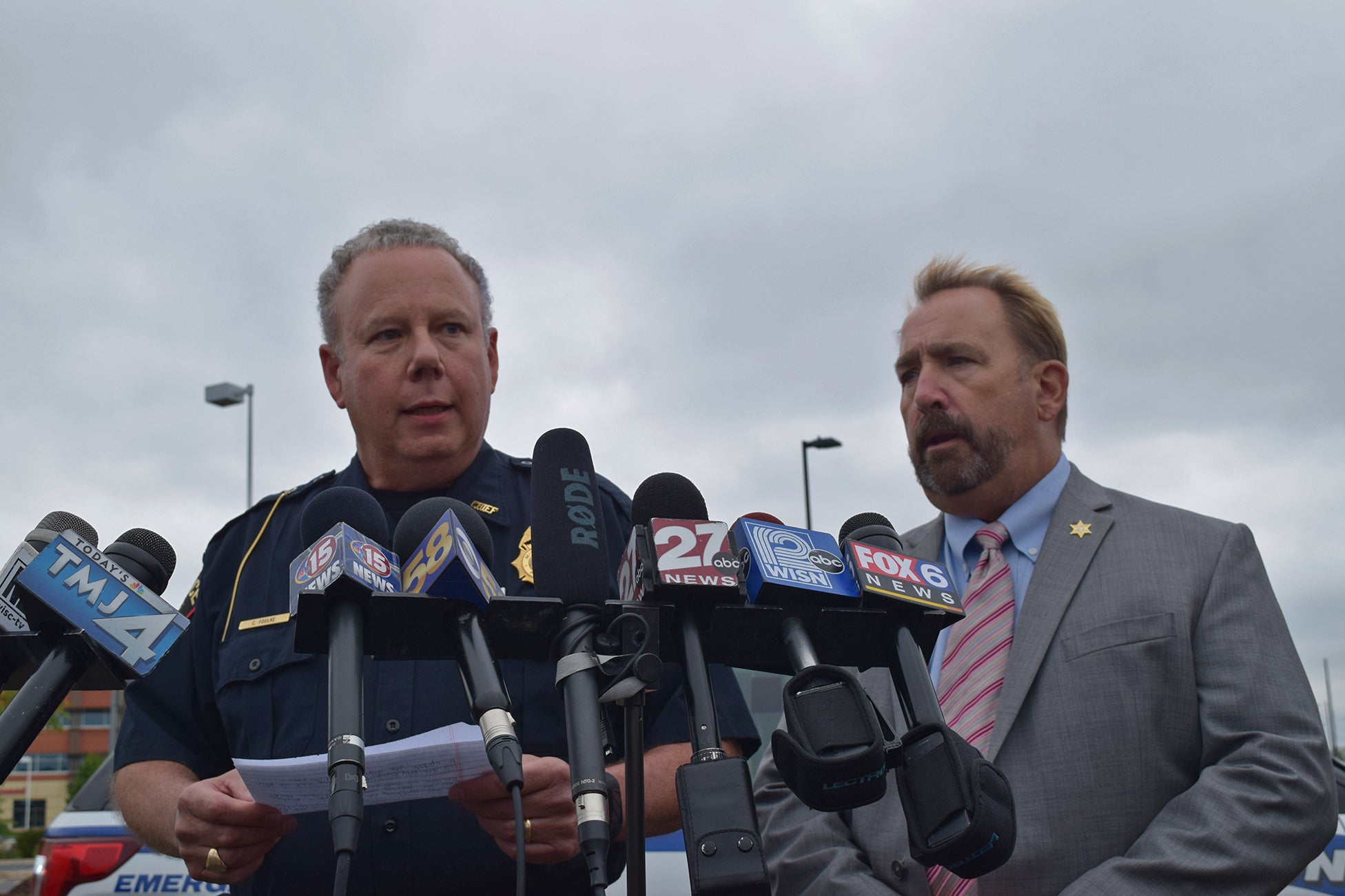 WTS Paradigm, Esker Software and IMEG, an engineering consultant firm, are located in the park and all connected.

Marlene Mecum, an employee at IMEG, said she heard gunshots while hunkering down at the Sentry Insurance offices, located in the business park. Mecum said the scene was terrifying. She saw one of the people injured carried out of the building, covered in blood.

Multiple agencies and ambulances responded to the shooting.

A WPR reporter on scene said there were dozens of law enforcement vehicles, ambulances and people wearing FBI and DCI windbreakers around 11:30 a.m.. The reporter also couldn't see anyone else on the sidewalks and streets near the building aside from first responders. Yellow tape was barricading off the area.

"Middleton is a very safe community, it's a great city, and it’s very unfortunate that this really happened," Brar said.

"We were ready for this. We have active shooter drills, and I think the police and EMS and fire, they responded very quickly and they got the situation under control," Brar continued. "So it’s really sad and I’m really very sorry, and it’s very unfortunate that this happened here or even anywhere. This is probably the first time ever that such a thing has happened in Middleton.

When asked about officer's training for such incidents, Foulke echoed Brar.

"We do train for this, but of course we hope it’ll never happen, but they did what they were supposed to do. And they did what we train, and yeah we learn from this stuff unfortunately, and we know that we can’t wait, we can’t wait to get a team together, they go in individually. And they’re well trained to that ... They have the equipment. They have the training. But man we hope we never have to use it, and I didn’t think we’d be using it in Middleton but we did today." 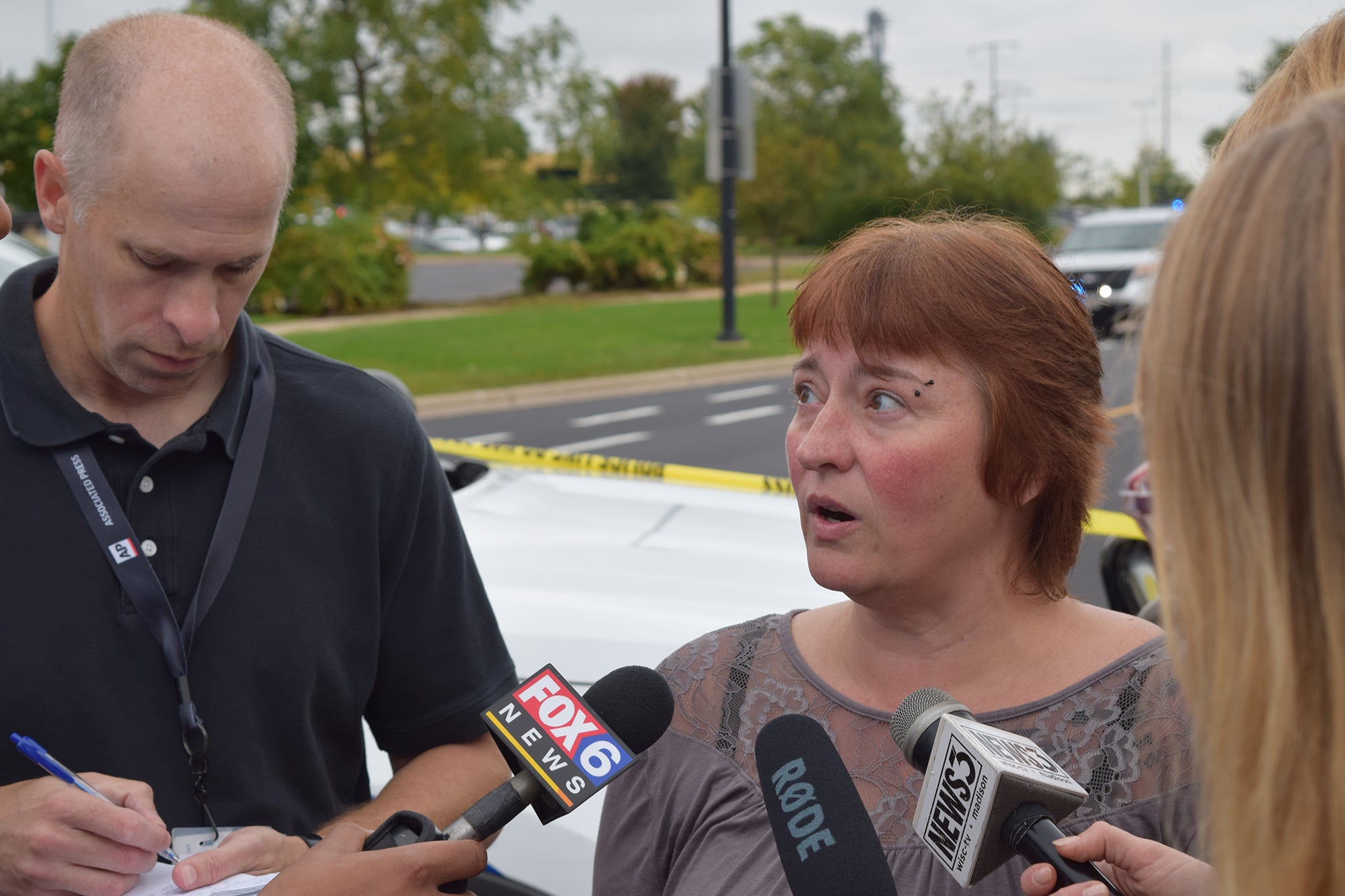 Marlene Mecum, an employee at IMEG, tells the media she heard gunshots while hunkering down at the Sentry Insurance offices. John K. Wilson/WPR

An emergency alert from the Middleton Police Department at 11:15 a.m., when the scene was active, urged people to shelter in place, avoid the area, lock all doors, stay inside and stay put until further notice.

"We have officially lifted the lockdown related to the active shooter incident in the 1800 block of Deming Way and anyone that was on lockdown can resume normal activity. The investigation is still ongoing and there will be police activity in the area for a prolonged period of time," the alert read.

Police have confirmed that the shooting took place at WTS Paradigm. We can confirm that our employees are safe. We are keeping the victims, first responders and all those affected by today's tragedy in our thoughts and prayers.

Both Greenway Station, a nearby mall, and all buildings in the Middleton-Cross Plains Area School District are no longer on lockdown.

Madison College also issued an "all clear" for its West campus Wednesday afternoon after asking people to shelter in place and standby for updates.

The Madison Metropolitan School District emailed guardians just before noon saying "there is no threat to our schools. Before full information was available, some of our schools took precautionary measures to ensure safety."

The business park will be closed for 24 to 48 hours while law enforcement canvas the building for evidence.