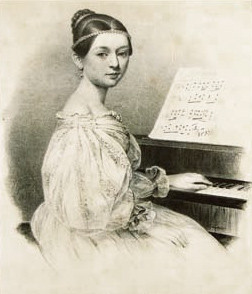 Clara Schumann was one of the best-known pianists in the world.  After a concert tour, she shared some of her impressions of Russia and Russian performers in a letter she wrote to Johannes Brahms from Dusseldorf on June 1st, 1854:

“We attended a grand festival in the Kremlin on Easter night and I'll remember it for the rest of my life.  As far as my success in Russia is concerned I have to say that I'm perfectly satisfied given the current acute financial crisis there.  I couldn't have done that well in Germany.  It's true though that the stress was extreme.  For example, the trip from St. Petersburg to Moscow lasted twenty hours.  I got there at nine in the morning, had a rehearsal at eleven and a concert in the evening.  Then I had three concerts on three successive days.  When we returned from St. Petersburg straight to Berlin the journey took forty-four hours.  It was murder on my poor back.  But I survived it all in good shape even though I was never in great health in Russia since the weather and the water didn't exactly suit me.

“In Moscow I heard Nikolai Rubinstein.  The man has amazing technique even though his fingers are quite short and thick.  Mostly he played drawing-room pieces and he pounds the piano in the latest fashion with gobs of pedaling and no emotion beyond the soft pedal.  But he's a lovable soul despite his moral principles, which I detest.  It's really a shame about those two brothers.  They are so highly gifted but completely lacking in seriousness and respect for their art.  Anton Rubinstein is coming to Baden for two months to work.  For his sake I wish he would, but I suspect he'll just carry on again.”