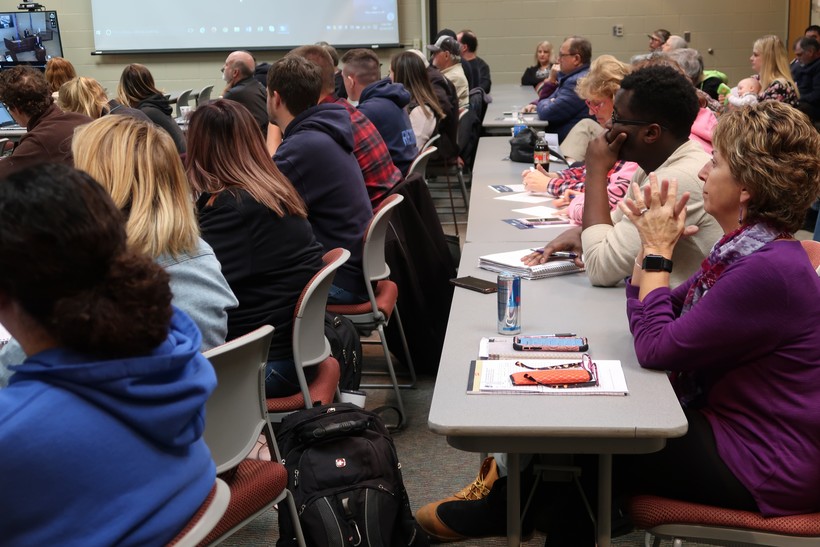 The Public Service Commission held a public hearing on Tuesday about a Superior utility’s request to raise electric, water and gas rates. The utility is seeking an increase to pay for improvements and a projected loss of income from the Husky Energy fires in April.

Privately-owned Superior Water, Light & Power Company is requesting a roughly 2 percent rate increase for both gas and electric services and a roughly 8 percent increase in water rates. Altogether, the utility's request would bring in around $2.4 million annually.

About a dozen residents spoke out against the increase for a variety of reasons, citing previous rate increases and a perceived lack of efficiency on behalf of the company.

"The city raises stuff. The county -- everybody's raising stuff on us and a lot of us are on fixed income," he said. "So what do we do now? How do we pay that?"

Residents said the proposed hike comes after the Public Service Commission approved an increase in water and electric rates last year.  Natural gas rates did decrease, but water rates went up 9.75 percent for the utility’s 10,000 water customers. Husky Energy made up around 25 percent of the 843 million gallons of water sold to customers last year.

Superior resident Annie Birdseye-Kyrola said they shouldn't be asked to bear that cost.

"If Superior Water, Light & Power are going to be losing their revenue from them, then they have every right to go seek after the Husky refinery to have that money brought back to their company due to their accident this year. That's basically what I wanted to say," she said. "I feel they are totally responsible -- not the citizens of our town."

Husky spokeswoman Kim Guttormson acknowledged they aren't using as much water and energy since the refinery fires.

"We are looking forward to getting back to normal operations, however we don’t expect that to occur until 2020," said Guttormson in an email.

Citizens said they're already paying more than most water utility customers in the state. The average monthly water bill is around $50 per month for a household using roughly 3,000 gallons, according to the utility's Paul Holt.

"We've been having ongoing discussions with commission about having some sort of an adjustment mechanism in place so that when we do have those increased sales to Husky, everybody else's rates will be adjusted appropriately," said Amberg.

"Many of our water mains have been in service for a very long time and over the years, we have tried to keep costs low and not done some replacements that we now have to do," she said. "It's been put off a long time and in order to continue to provide the clean, safe water that people should be receiving, we need to make these improvements in our system."

The Wisconsin Citizens Utility Board wants the commission to consider customers' ability to pay, according to executive director Tom Content. He noted the income of Superior residents is less than the statewide average.

"It's not easy for customers to shoulder an increase, especially a significant increase on the water side,” he said.

Content said he hoped the commission would set up an account that would set aside some funds from the rate increase, which could be used to refund ratepayers once Husky resumes operations.

At the same time, Enbridge Energy is requesting to decrease its rates with the commission. In testimony supplied to the commission, Enbridge senior energy management specialist Shane Henriksen said the company is paying far more than it costs for the utility to provide service. He said Enbridge would pay roughly $1.2 million more each year if the rate request is approved.

"It is not equitable for one customer to bear the burden of paying so much more than the costs to serve," wrote Henriksen.

Content said a decrease in rates for Enbridge would raise rates 6 percent for utility customers.

"They’re not paying an unreasonable rate," said Content. "We think Enbridge's proposal would produce too many harmful effects for residential customers and small businesses."

Enbridge spokeswoman Jennifer Smith said the company has been paying more than the utility's cost to service their facilities for years.

"We believe the rates payers are charged should be close to the actual costs of services received," said Smith in an email Wednesday. "Accordingly, Enbridge is seeking a reduction in this current rate case to bring us closer to our actual cost of service."

The commission has received more than 160 comments on the proposed rate increase. If approved, it's anticipated the rate increase would take effect next year.

Editor's note: This story was updated at 9:29 a.m., Wednesday, Oct. 17, 2018 with comment from Enbridge and information about the PSC's audit of the utility's rate request.