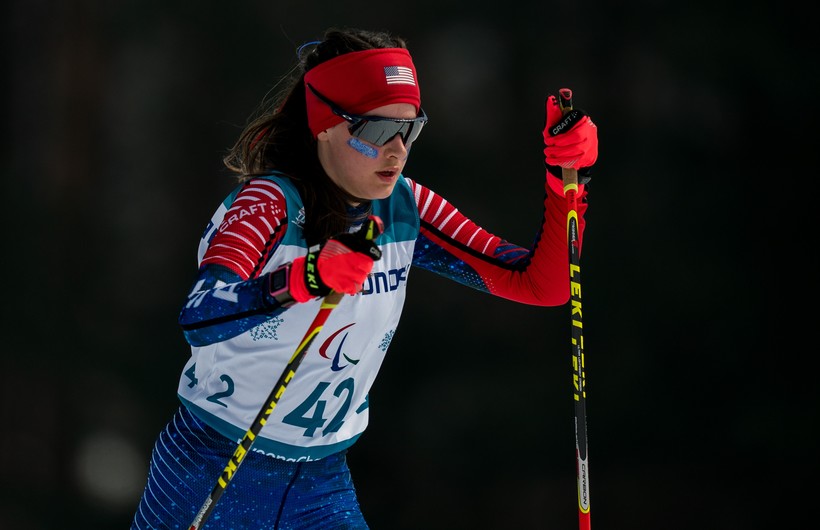 So in high school, she did.

"My first race was a race in southern Wisconsin" said Zutter. "It was a really small, maybe like 30 people, in the race. I had a guide, Andrew Poffenberger, the guy that introduced me to skiing for the first time. It was a 5k and I didn't fall at all. I finished and immediately I blurted out, 'This is my sport! This is what I'm doing!' It was so much fun," said Zutter with a laugh.

"I've always loved endurance sports," said Zutter. "It was my perfect hybrid of the two sports."

She placed 8th in the Women’s 15km Free for Visually Impaired — her favorite race — Monday.

"Those are such different distances that the mental preparation for each one is so different," said Zutter. "That's the thing I love most about skiing, too. You can do distance, and you can do really short races. You’re never bored. With running, you just run, and that can get a little old. In cross-country, all I run now is 6k. With skiing, there's so much variety."

As much as she prefers cross-country skiing, she doesn’t want to sell running short. Zutter is a member of both the cross-country running and Nordic skiing teams at The College of St. Scholastica in Duluth, Minnesota. During her Paralympic run, Zutter will race with the help of a guide. Kristina Trygstad-Saari, of Montana, met Zutter in Canada and first skied together in the December 2017 World Cup in Canmore, Alberta.

After her results at a

"We just immediately clicked really well," said Zutter. "She was the first female guide I've had. In the past, I've only had male guides, so I really like that aspect of it."

Their bond is strong and Zutter said it takes a lot of good communication and being up front about what she needs information-wise on the course.

During the races, Trygstad-Saari will ski ahead of Zutter while wearing what she calls a "pop star" microphone. Her voice is amplified from a speaker worn on her back.

"It's so windy when you're out there so it amplifies the sound," said Zutter. "She gives me a steady, 'Hut, hut, hut,' just a sound to follow. Then, as we're going through the course, she'll change it to, 'Left, left, left,' or right depending on which way the course bends."

Even with a guide, Zutter said cross-country skiing gives her the opportunity to be more independent.

"In running, I'm connected to my guide with a tether. But skiing, I get to be on my own. I'm doing it myself, so it feels a little bit like more freedom," Zutter said.

Zutter was diagnosed with Stargardt disease in 2011. It’s a genetic disorder that exceedingly blurs a person’s center vision.

Dr. David Gamm is a pediatric ophthalmologist with UW Health and director of the McPherson Eye Research Institute. He diagnosed her with the condition about six years ago.

"It's quite debilitating, but in children who have Stargardt, it happens gradually over time and it's remarkable that it can go unnoticed both to the individual who has the problem as well as the family, because they adapt so well," said Gamm. "Children are resilient, right? And they don't know anything different. Oftentimes they'll say, 'Well, I thought everybody saw this way.' So they often do really remarkable things, when it comes to light that they're having a problem."

Gamm said Zutter was already excelling as a student and athlete by the time he met with her. Her diagnosis wasn’t going to hold her back at all.

"I mean I never knew how much vision I was going to lose. It was so gradual. It's not like I woke up and I was like, 'Well, more of it's gone.' I just didn't notice," said Zutter.

"I think in seventh grade, when I went out for track the first time, I did it because my older sister did it and I want to be her," said Zutter. "I was doing this sport with a guide, competing in meets with the rest of my classmates, but I was doing well ... just realizing that I'm still a fast runner, despite the situation. I can be an athlete, just like anyone else. So that was really empowering to me.” Mia Zutter moments after learning she qualified for the Paralympic Games in Pyeongchang. Photo courtesy of the Zutter family

Zutter credits her family with a lot of her success. Her parents have taken her to cross-country skiing competitions around the world. Her dad even took up skiing with her and would drive her to places like Minocqua to practice if there wasn’t any snow near Madison.

Gamm said her family has been instrumental in helping her reach her goals. Both him and his team were instrumental in getting Zutter into the Paralympics, filling out mountains of paperwork so she could be certified eligible for the Winter Games.

While Gamm helped Zutter get to Pyeongchang, he's quick to say that both Zutter and her family have been a big inspiration to him.

"I've used Mia's life as a means of reaching other patients that come in my door that receive the same or similar diagnosis," said Gamm. "The families are hit so hard initially with the information, to be able to turn around and give them a case example of what can be accomplished, families have come back to me later and said, 'that really helped us get through that initial shock.' It takes a while for that to wear off a bit and realize you still have the same child, the same person, the same goals you can reach."

Gamm added: "Her story has resonated across my practice. Now it'll resonate across the world."

Zutter said her change in vision has made her a stronger athlete.

"I'm consciously thinking about what I'm doing more," said Zutter. "There's a lot more technique to skiing than running, since there's equipment involved. My biggest thing is rhythm, because I can't really watch my teammates ski by me with their perfect form, so I kind of have to find my own ways of learning how to master the skills."

Zutter isn’t putting too much pressure on herself to medal in Pyeongchang, this year. Her goal this year was to qualify, but it’ll be a different story for the Paralympic Games in Beijing, China, in 2022, where she’s "definitely looking to medal."

"That's one thing I love about skiing is that it doesn't really have a time limit. My competitors, some of them are upper 30s, 40s. So it's a really cool sport that can last for so long, it's doesn't expire like gymnastics does or figure skating," said Zutter. "It's a marathon not a sprint."