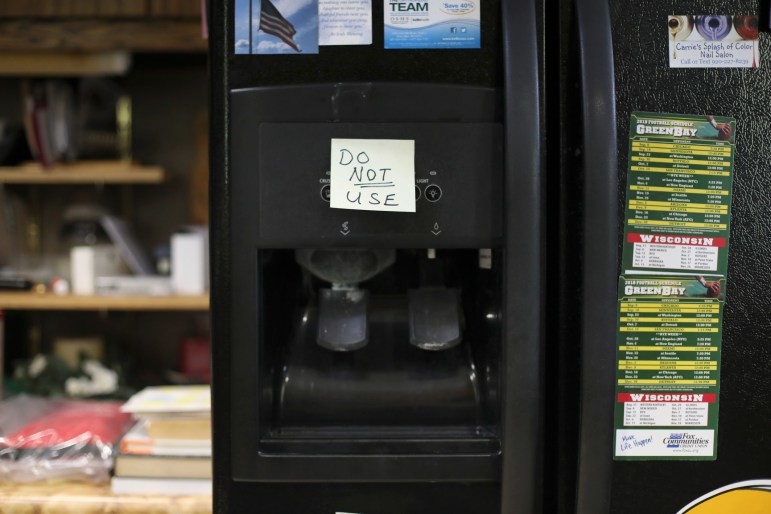 The Karnopps of rural Luxemburg, Wis., warn visitors not to drink the water from taps in their home. The couple’s well has tested positive for nitrates and coliform, and they no longer use it for drinking or cooking. Photo taken March 29, 2019. Coburn Dukehart/Wisconsin Watch

A new analysis from the Environmental Working Group finds that lower income communities in Midwest states are more likely to deal with nitrate contamination in their drinking water, including around 200 communities in Wisconsin.

The review examined federal census data along with state data of drinking water tests conducted at community water systems in Iowa, Minnesota and Wisconsin. For Wisconsin, the environmental advocacy group examined data collected between 2003 and 2017. The analysis showed communities with elevated nitrate levels in drinking water were more likely to have households making less than the state’s median household income.

The group found 66 percent of 303 communities with elevated nitrate levels — 201 communities — had lower income households that represented 550,310 people. The review also found 36 of 51 systems that were at or above the federal nitrate standard served communities with households making below the median state income.

"When you have lower income communities struggling with nitrate and drinking water, it's an extra cost burden on these communities that already might have trouble paying for water bills or other necessities," said Anne Schechinger, senior analyst of economics for EWG.

The group considers a community to have elevated nitrate levels if its water system has had at least one test at or above 3 milligrams per liter, which is less than half the federal standard. The U.S. Environmental Protection Agency has set a maximum contaminant level of 10 milligrams per liter for nitrate in drinking water to protect against blue-baby syndrome — a condition that affects how oxygen is transported through the blood. Nitrate exposure in infants under 6 months can cause serious illness or death.

The EPA has found concentrations greater than 3 milligrams per liter indicate contamination from human activity, and research indicates there’s an increased risk of serious health problems like colorectal cancer and thyroid disease at nitrate levels lower than the federal standard.

"It can really get expensive fast for these smaller systems to treat for nitrate," she said.

The group’s analysis pointed out that Beloit had eight tests that showed nitrate at or above the federal nitrate standard from 2003 to 2017.

Beloit Water Resources Director Bill Frisbee said those elevated levels all occurred in a single well prior to the last decade. Beloit completed a nitrate mitigation program in early 2011. The city drilled a deep well nearby and blends that water with the well that exceeded the federal standard for nitrate.

Since then, Frisbee said the city has not had any levels above the EPA’s limit. Last year, the city’s highest nitrate level was roughly half the federal standard.

"We are providing good quality drinking water, and we are meeting all federal requirements for the standard," said Frisbee. "If science shows that the standards change, then our methods will change to continue to meet whatever the drinking water standards are."

In Chippewa Falls, the water utility spends up to $100,000 or more each year on the energy and supplies required to treat for nitrate, according to Rick Rubenzer, the city’s public works director and utility manager. The city’s utility has been treating its drinking water for nitrate since 1998.

Rubenzer said six of the city’s nine wells have shown evidence of nitrate since that time with two consistently testing around 12 milligrams per liter. However, he said nitrate levels have been trending downward since 2017.

The utility ensures that all drinking water coming out of the tap tests below 8 milligrams per liter, said Rubenzer.

"We do pride ourselves in having good clean water here, and we want to keep it that way," said Rubenzer.

The overwhelming majority of public water supplies meet the nitrate standard of 10 milligrams per liter, according to the Wisconsin Department of Natural Resources. Around 10 percent of private wells sampled in Wisconsin exceed safe levels of nitrate in groundwater, which is the primary source of drinking water for more than two-thirds of Wisconsin residents.

Nitrate is the most widespread contaminant in Wisconsin, and the biggest cause of nitrate pollution is typically leaking septic systems and farm runoff. Around 90 percent of nitrogen in groundwater can be traced back to agriculture.

"We need to recognize that we're going to have to change our agricultural practices if we're going to strike a balance between having clean drinking water, whether that's for many of our municipalities or for our residents on private wells in rural Wisconsin, and making sure that our farmers and producers can survive and thrive," said Scott Laeser, water program director for Clean Wisconsin.

Laeser would like to see $15 million for well remediation and testing over the next decade to help thousands of families whose private wells have nitrate levels exceeding the federal standard.

The DNR has also been crafting rules to restrict manure spreading in areas with soils that are sensitive to groundwater contamination. The development of regulations has prompted support from environmental groups and pushback from agriculture groups like the Dairy Business Association. The group has shared concerns about the cost of complying with new restrictions and insufficient cost-share assistance from the state.

Schechinger said her group would like to see the agency’s rule move forward so that farmers would be required to adopt conservation practices to protect nearby groundwater and community water systems.