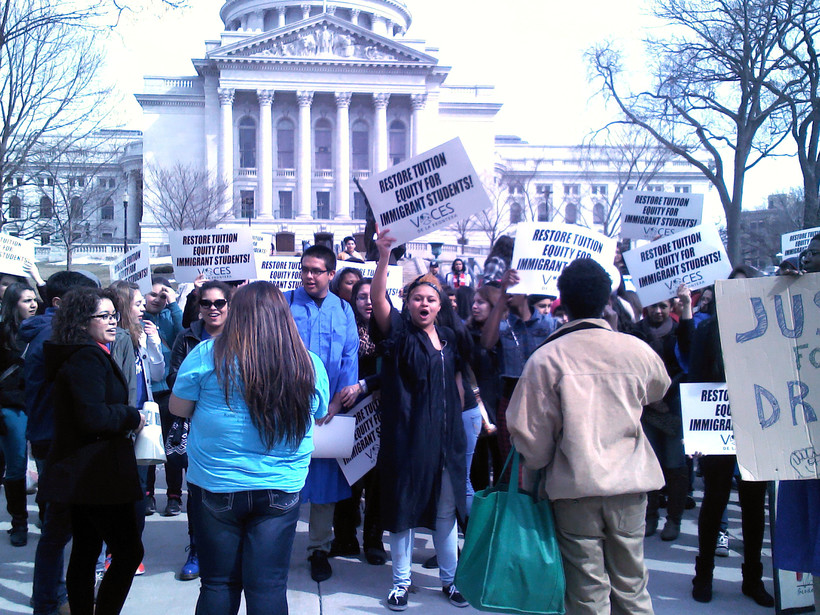 Students Rally For Bill Granting In-State Tuition To Some Undocumented

More than 100 high school and college students marched from the state Capitol to the University of Wisconsin-Madison campus Tuesday afternoon in support of a bill that would grant some undocumented students living in Wisconsin the right to pay in-state tuition to attend college or university.

Tuition for Wisconsin residents attending a UW System school is currently a little more than $3,000 a semester. That's about half what non-residents are required to pay. Under the bill, authored by state Rep. Jocasta Zamarripa, students without legal documentation as U.S. citizens could qualify for the lower tuition rate if they meet certain conditions. Zamarripa laid out two of those conditions when she introduced the students on the Assembly floor today.

“Mr. Speaker, they want to pay their way through college,” Zamarripa said. “They want to pay in-state tuition if they've lived here for three years and graduated from one of our Wisconsin high schools. They want a fair shot, not a free ride.”

Before beginning their march to the UW campus, students chanted and held signs reading “Restore Tuition Equity For Immigrant Students.”

One of those immigrant students is Valeria Gonzalez, who came to the U.S. when she was four years old. She will graduate from UW-Milwuakee in May. She was able to pay in-state tuition because of a state law on the books when she enrolled, allowing it. Gov. Scott Walker, however, removed funding for the program from the budget soon after he was elected in 2010. Gonzalez says there are lots of students who could benefit if the program was reinstated.

“Out of the thousands of students that graduate from high school each year, there is a percentage of those students who would like to go to college,” Gonzalez said. “Many of those that we're not including in those statistics don't even know that they could go to college.

“We imagine that those numbers would be a lot higher if they knew that they could afford to go to college,” she continued.

Currently 16 states have similar laws on the books. The bill to make Wisconsin number 17 has not received a hearing yet.