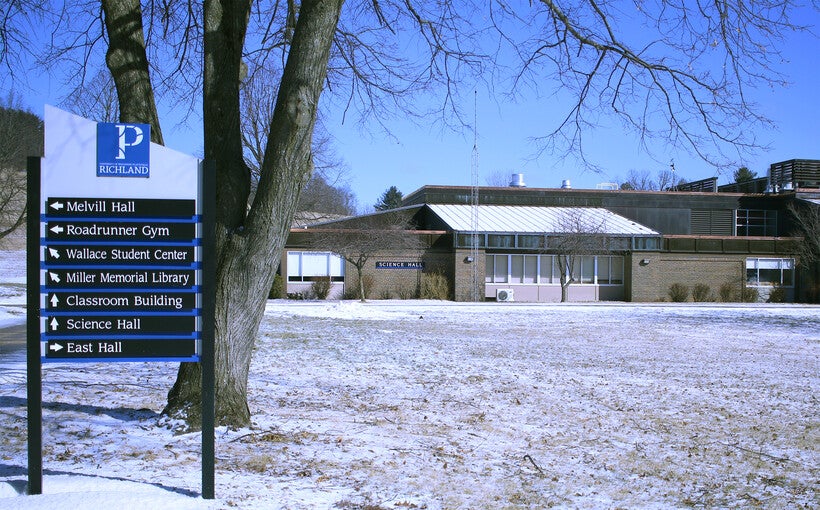 UW-Platteville Richland's campus in Richland Center is mostly empty these days. Enrollment has fallen by 87 percent since a peak of 567 students in 2014. Last fall, there were 75 students enrolled. Rich Kremer/WPR

Students, community members push back against end of classes at longtime college campus

Petition with around 1,400 signatures delivered to UW System President Jay Rothman at UW Board of Regents meeting
By Rich Kremer
Share:

A group of students and community members from Richland Center are trying to prevent the end of in-person classes at their college campus next summer. The group delivered a petition with 1,400 signatures urging University of Wisconsin System President Jay Rothman, state lawmakers and Gov. Tony Evers to find a way to save UW-Platteville Richland.

The students and some Richland County officials traveled to Madison on Thursday to deliver the petition and testimonials to Rothman during the December meeting of the UW System Board of Regents.

Rothman announced Nov. 22 that in-person classes for degree-seeking students would end by July 1.

The group contends that staff cuts and decreasing budgets contributed to enrollment declines at the campus. In a statement, they said the campus budget had been cut 55 percent since 2012, leading to the loss of a dean, most professors, an international coordinator and a campus recruiter.

Former UW System President Ray Cross announced a massive restructuring of the state's colleges and universities in 2017. Regents approved the plan, which merged two-year colleges with nearby four-year universities in an effort to address significant enrollment declines. With the merger, Richland's campus became an extension of UW-Platteville, which is an hour to the south.

There were 567 students at UW-Richland in 2014. When the restructuring was announced, it had fallen to 273, a decrease of nearly 48 percent. Enrollment grew slightly to 366 students in 2018 but dropped to 60 this fall, a decline of more than 83 percent.

The statement from the Richland students and county officials asks Rothman to "consider shifting oversight of UW-Richland from UW-Platteville to UW-Madison."

"Burgeoning enrollment at Wisconsin’s flagship campus presents an opportunity to educate rural and international students who can complete their first two years at UW-Richland, and then transfer to a larger campus like UW-Madison," the release said.

Brody Smith is a freshman at UW-Platteville Richland who is planning to transfer to UW-Whitewater when the spring semester wraps up in May. He was part of the group that met privately with Rothman on Thursday.

"We kind of got our message out by telling him things that could have been differently done, things that we really appreciate about Richland," Smith said.

Richland County Board Vice Chair Shaun Murphy-Lopez was also part of the delegation from Richland Center. He told Wisconsin Public Radio the community is "not going to give this campus up."

Murphy-Lopez said during their meeting, Rothman discussed enrollment challenges faced by two-year colleges across the country, but he believes the steep declines at his community's campus over the past decade shows "something very different is happening in Richland."

During comments to regents, Rothman said he appreciates the passion and advocacy from the group, but with just 60 students on campus he had few choices.

"Looking ahead, we are prepared to provide a UW presence at the Richland campus, which may include enrichment online reskilling and upskilling instruction for adult learners and online degree completion courses," Rothman said.

WPR asked Murphy-Lopez if he was satisfied with that potential future for the campus that's been part of the community for more than 55 years.

"If that's their offer on the table, I think we're going to need to keep negotiating," Murphy-Lopez said.

While UW-Platteville Richland experienced the most severe enrollment declines, the number of students across all 13 of the state's former two-year colleges fell by 57 percent, or around 7,400 students between 2010 and fall of 2021.

Rothman said the UW System is monitoring enrollment trends at some of the two-year campuses.

"However, we are going to work to ensure that these critical access points throughout the state continue to innovate to provide education and services that Wisconsinites rely on," Rothman said.

After years of steep enrollment declines, in-person classes at UW-Platteville Richland will end July 1. While the UW System is exploring a plan to provide adult, online education access at the campus in rural Richland Center, it marks a major shift for the campus that enrolled more than 500 students just seven years ago.