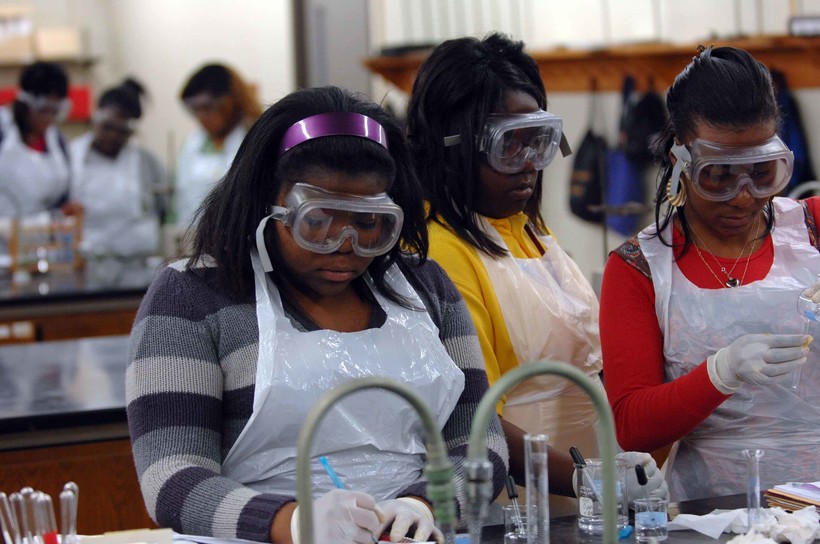 Students Of Color Study STEM With A Focus On Social Justice

Young students interested in STEM fields are often pitched that the careers are lucrative.

But a new study from Vanderbilt University suggests that for students of color, it’s not just about the money.

Researchers found African-American and Latinx students were most likely to go into science, technology, engineering and mathematics because of their interest in social justice issues.

"They are very passionate about the STEM itself," said Ebony McGee, lead author of the study. "But they see it being intersectional with being able to do good in the world, either in their communities or in the larger global community."

For the study, McGee interviewed 38 high-achieving black and Latinx STEM undergraduate students, asking for their life stories and what motivated them to enter STEM fields.

Some of the students’ stories were more traditional, such as wanting to make money for their family, said McGee, associate professor of education, diversity and STEM education at Vanderbilt.

"But we also saw folks wanting to do STEM to do things like market the injustices of police cameras in their communities and use the technology they’ve learned in order to talk about the ways in which their communities were surveillanced. Or to build technologies for autistic youth," she said. "Or to do something that was much more community-centered, much more holistic in nature than we often think about what STEMmers actually want to go into in terms of their career trajectories."

According to a U.S. Census Bureau report from 2013, black people only held 6 percent of STEM jobs, and Latinx held only 7 percent, even though they make up 11 and 15 percent of the total United States workforce, respectively.

Many of the surveyed students said they didn’t feel their goals matched up with the way STEM is often marketed.

McGee said the medical field has always been seen as a place for empathy and altruism. That’s not true with other STEM jobs, she said, where companies focus on innovation and power, not necessarily helping others. That doesn’t mean it can’t change.

"We can do these things when we talk about building power products or environmental engineering," she said. "We can make those marketing campaigns happen similarly to how we’re doing in the biomedical field, if we just take the time to understand that these are the factors that really matter to many students, not just students of color."

Although all of the surveyed students were considered high-achieving, over half said they were considering leaving STEM because they couldn’t reconcile that ideological conflict.