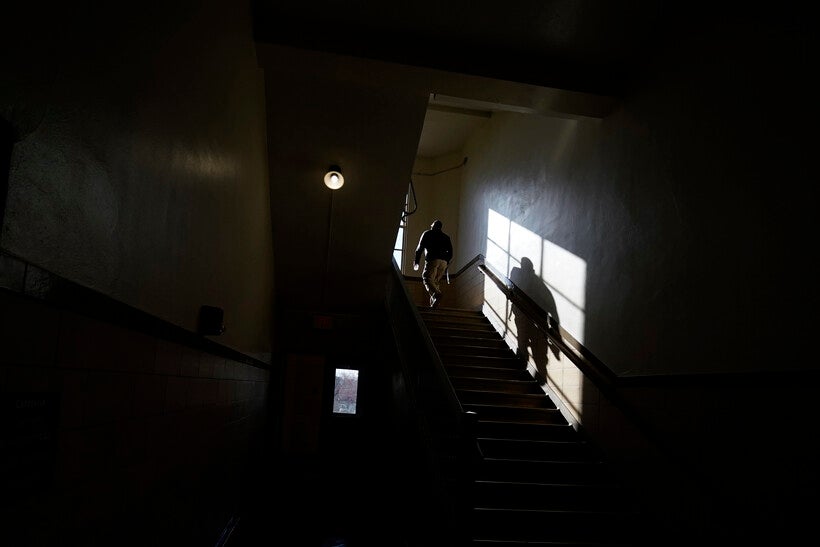 A staff member at Wyandotte County High School walks up a staircase on the first day of in-person learning at the school in Kansas City, Kan. Wednesday, March 31, 2021. The district was one of the last in the state to return to the classroom after going virtual due to the COVID-19 pandemic. Charlie Riedel/AP Photo

When Miah Minor visited Waukesha West High school before her freshman year, she said the first thing that put her at ease was seeing Pride flags and signs supportive of LGBTQ+ students.

"I was very nervous, because I was new to Wisconsin when I was a freshman," she said. "Seeing the signs in all the classrooms when I was touring the school before I started going there, it just made me feel more comfortable."

Miah, a junior who identifies as asexual and has a lot of friends who are LGBTQ+, worries that younger students won’t have the same experience. This school year, the Waukesha School District has been enforcing its policy against controversial and political signs by removing Pride flags, flyers and the district’s own non-discrimination policy posters from schools.

"A lot of my friends don’t have safe spaces they can go to easily, a lot don’t have good home lives or just don’t feel safe in general," said Miah. "It’s just very difficult for a lot of my sophomore and freshman friends who don’t know what teachers they can go to safely about issues they might have at home, or just any issues really regarding that stuff — because I’m sure most teachers respect all their students, but only a few teachers are well-equipped enough to handle those kinds of issues."

Waukesha’s policy has prompted pushback from students like Miah, who have testified against the removal of posters and flags at school board meetings all year, as well as parents, teachers, and the Wisconsin chapter of the American Civil Liberties Union.

The ACLU filed a public records request last week asking for more information about how the policy is being applied. Chris Donahoe, the ACLU attorney handling the case, said parents, students and a teacher approached her with concerns that the policy was being unevenly applied, and ran afoul of students’ and teachers’ First Amendment rights to free speech.

Donahoe said her goal with the public records request is to find out how Waukesha came to its decision to enforce the policy by taking down flyers and flags that would previously have been allowed, how that decision was communicated to staff, and how it’s being enforced — particularly whether it’s being enforced consistently or in a discriminatory way.

"Our goal has been to have neutral classrooms for teaching and learning by asking staff to remove items that could be construed as political, disruptive to the learning environment, or outside the scope of the curriculum," Koch said in an email. "We have reviewed our Board policies that speak for themselves across the District and created a new poster that highlights those policies and our commitment to all."

Laura Pinsoneault, the parent of a junior at Waukesha North High School, said new posters regarding the updated policy aren’t having much impact on her daughter and her friends.

"Kids don’t read and respond to policy, they respond to behavior and they respond to what they see," Pinsoneault said. "This whole kind of approach of, we’re doing this for policy reasons isn’t reflective of good knowledge of development or how youth connect or interact or experience things."

Pinsoneault, Miah and other parents say they feel like harassing or bullying behavior against LGBTQ+ youth and kids of color has stepped up since the district started removing more posters and flags this year. Donahoe at the ACLU said there have been credible allegations of increased harassment and bullying.

"Waukesha, or at least West is kind of — a lot of students are not the nicest," said Miah. "There’s a lot of slurs just thrown around in the hallway randomly, or a lot of stuff that it just helps if you have a teacher you can go to."

Community members say they’re also at a loss to explain why the district’s enforcement of its policy against political and controversial signage changed this year.

"Let me put it this way, I’ve been to multiple school board meetings over the last few months, and at every single school board meeting, there have been anywhere from five to 10 youth from the school system standing up and speaking out against this change in the signage policy," said the Rev. David Simmons, whose has a daughter at Waukesha West. "We have not had a single student stand up and say they felt threatened or they were hurt by the existence of those flags and policies."

Simmons, Pinsoneault and Donahoe said the way the policy has been enforced this year feels like part of the right-wing national effort that’s passed "Don’t Say Gay" bills in other states and led to banning books from school libraries that deal with LGBTQ+ issues and identities.

"This policy seems to be a good example of a really deep-seated fear of what happens when people start expressing themselves, or feel welcome to express themselves, and what happens when they have different viewpoints or viewpoints that we don’t agree with," said Donahoe. "Unfortunately for these people who are afraid, the First Amendment does give students the right to speak freely, and that right does not end when they enter school — as long they’re not causing a substantial disturbance, they are entitled to their viewpoints and they are entitled to speak that freely in schools."

Pinsoneault said it’s been impressive to watch students articulate their frustration with the policy’s enforcement at school board meetings, and to see them "calling bulls---" on the removal of school district policy signs that were up in high schools for a decade before being removed this year.

Miah said testifying at school board meetings has helped her make connections with students at other schools, and to get over her fear of public speaking. Still, she said, it’s exhausting for LGBTQ+ students and students of color to have to push back against these policies themselves, and to constantly have to push back against bullying without having the signals of support from teachers and other students that used to be more visible through signs or flags.

"It shouldn’t be the minority’s job to educate the other groups of people who don’t have to struggle with those issues about those issues," she said. "It’s just very frustrating."