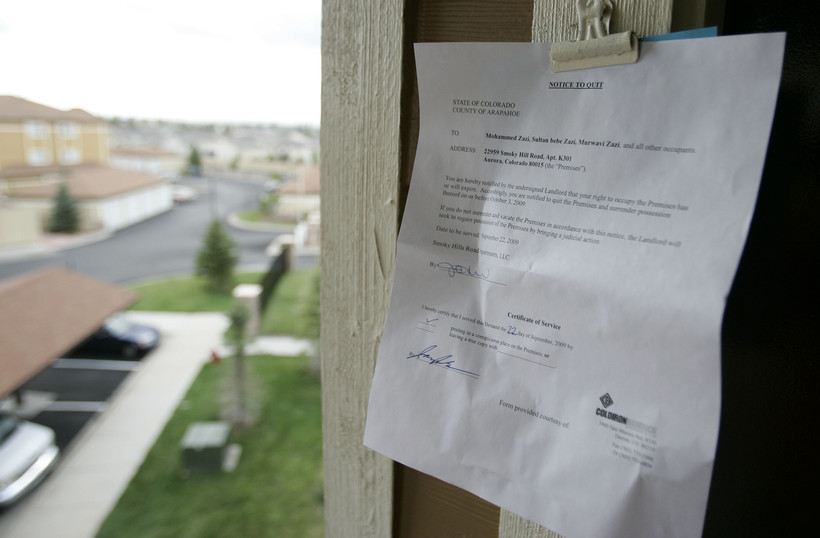 An eviction notice is posted on the apartment rented by Mohammed Zazi and his son Najibullah Zazi in Aurora, Colo. Thursday, Sept. 24, 2009. Will Powers/AP Photo

Just days after a national eviction moratorium expired, the Biden administration issued a new freeze that will remain in effect through Oct. 3.

The new ban on evictions covers parts of the country that are experiencing what the Centers for Disease Control and Prevention calls "substantial" and "high" spread of the coronavirus. As of Wednesday, much of Wisconsin was included in those categories.

"Where we are right now with such high disease rates, we felt a new, tailored order (was needed) to make sure that ... working Americans who were at risk of eviction could be stably housed during this really tenuous, challenging period of time," CDC Director Dr. Rochelle Walensky, told NPR's "All Things Considered" Tuesday.

The initial federal moratorium, which was first enacted by the CDC in September 2020, expired July 31, affecting millions of Americans who had the potential to be removed from their homes if they had fallen behind on rent during the pandemic.

Bill Ross was given an eviction notice for his La Crosse apartment in January, but the moratorium protected from being thrown out.

For the last seven years, the 64-year-old has relied on Social Security Disability Insurance as his health worsened. Ross has stage-four kidney failure, chronic obstructive pulmonary disease and diabetes.

The checks he gets barely cover his $665 rent and remaining bills, but he said until the pandemic, he made it work. Ross reached out to WPR's WHYsconsin asking for information about rental assistance.

"I didn’t plan on this, but it’s something I have to live with," Ross said.

On Wednesday, Ross was pessimistic, saying he's still waiting to be evicted, despite the moratorium being extended two months.

The CDC currently lists La Crosse County as "substantial" for the spread of coronavirus.

He said the extension is good news for everyone who is struggling to pay their rent because it covers all but a handful of Wisconsin counties.

"It’s important for tenants to keep paying rent, rent is still due, but if a tenant is having trouble paying rent, there is help available," Bare said. "The combination of an eviction moratorium and rent assistance dollars is powerful for preventing evictions."

Wisconsin instituted its own eviction moratorium in March 2020, that lasted until May of the same year. Both bans helped Wisconsin renters remain in their homes, despite being behind on rent.

According to the Department of Administration’s Wisconsin Eviction Data Project, there were 1,398 evictions filed in June 2021, compared to 3,042 in June 2020, when the CDC moratorium was not in place.

Since February, the Wisconsin Emergency Rental Assistance Program has provided $4 million in rental assistance to the Coulee region of the state.

Brown stressed the importance of preventive support to keep people in their homes because once people are evicted, it can ruin their chance of ever rebounding financially.

"An eviction on your record prevents you from getting housing in the future, and it decreases your access to other financial stability programing," Brown said.

And she argues the program not only helps tenants, but also landlords, who are also struggling with their bills.

But Chris Mokler, a lobbyist with the Wisconsin Apartment Association said the continued extension of the eviction ban is hurting landlords because some tenants aren't using the time to get rental assistance.

"On a national average, a landlord only gets 8 to 9 cents of every dollar to go in their own pocket. Assuming the rent is paid in full, the rest of the money is paying the mortgage, the utility bills, the taxes, all the things you can't get out of paying but has to get paid," Mokler said. "It's putting landlords in a tough position, this continual moratorium on them collecting the rent in some cases, not all tenants, but enough that it hurts the industry."

Kenosha resident Sherry Ratliff is in the midst of looking for a new apartment. She received an eviction notice on June 28 after losing her job at a call center during the pandemic and falling two months behind on rent.

While she hasn't been kicked out, her landlord took her to court on Monday. She's contesting the eviction, saying the living conditions were not up to standard. The judge has not yet made a decision in the case.

Most of the places she's looked at require a reference — something Ratliff, 63, is struggling to get.

On Wednesday, Ratliff was relieved the eviction ban gives her two months to secure rental assistance and move, without an eviction on her record.

"I’m so humbled," Ratliff said. "I am so grateful and thankful to the progressive Democratic Party that we are given time."

Information about signing up for rental assistance in Wisconsin can be found through the Wisconsin Community Action Program, a nonprofit that administers the program with the state Department of Administration. For a list of organizations by region that can help with rental assistance, see the bottom of this story or this map.