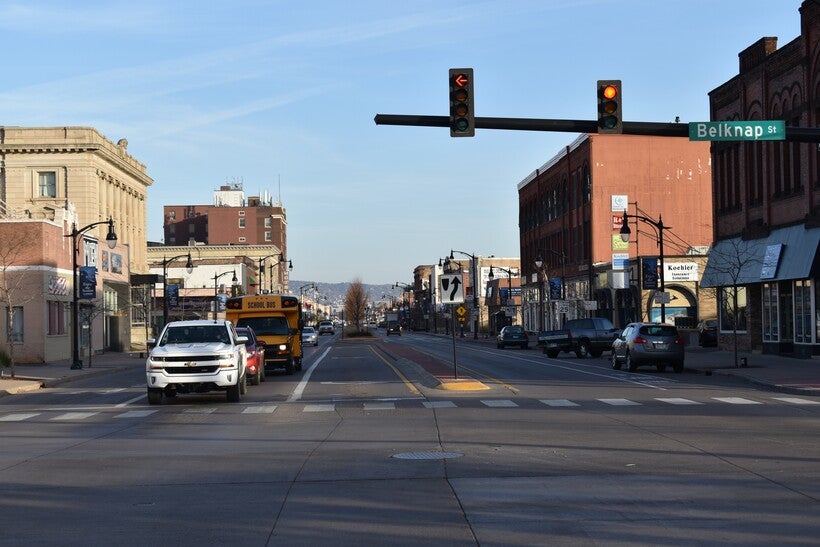 A view of Tower Avenue in Superior on Friday, Nov. 6, 2020. Danielle Kaeding/WPR

North Country Independent Living in Superior received a $475,347 grant this year from the Advancing a Healthier Wisconsin Endowment at the Medical College of Wisconsin to help reform mental health crisis response in Douglas County. The nonprofit group that serves people with disabilities is part of a coordinated community response team that aims to support access to services in the area.

Liz Gilbertson, the agency's assistant director, said a lack of resources or capacity can mean that people don't receive services until they've reached a point of crisis. In those cases, people may be detained in an emergency and placed under a psychiatric hold if they're considered to be a harm to themselves or others.

"If they're needing stabilization, a lot of times there isn't the local resources here," said Gilbertson. "So, they're having to go to further down in the state or other states to access and get those services."

Last year, the Superior Police Department received 391 calls related to mental health issues, which included people who threatened or attempted to take their own lives. Brad Jago, a community resource officer at the Police Department, said they've seen a similar number during the COVID-19 pandemic with 352 mental health related calls as of mid-December.

Jago said COVID-19 safety procedures has delayed the process for admitting those in crisis, who are often transported to nearby hospitals in Duluth.

"So, we tie up one or two officers to drive them to those locations and then wait with them until they're settled. Obviously, we would prefer that we maintain resources in our own community so that people can stay in our community," said Jago. "It's not uncommon for somebody to enter our local mental health system but then end up in North Dakota or Winnebago County."

The closest Wisconsin hospital that can provide inpatient services for people in crisis is in Eau Claire. However, a lack of beds means people are often transported around five hours from home to the Winnebago Mental Health Institute in Oshkosh, creating further stress on individuals and families. Under the current state budget, Gov. Tony Evers redirected $15 million for additional beds at a mental health crisis center in Eau Claire to Mendota Mental Health Center in Madison.

Douglas County health officials have said they saw more than 50 mental health commitments last year, which can cost the county more than $30,000 per month.

The county, which is home to the city of Superior, has long struggled with barriers to mental health services. A 2015 survey found nearly 29 percent of people in Douglas County experience anxiety and 23 percent have experienced depression. Almost 1 in 5 residents surveyed wanted to get help, but they delayed or decided not to seek services.

While services exist just across the border in Duluth, access is often limited. Wisconsin programs like BadgerCare, the state's Medicaid program, may not pay for mental health resources, according to Lynn Goerdt, an associate professor of social work at the University of Wisconsin-Superior who is also part of the Douglas County response team.

"One of the issues has been the Medicaid reimbursement rate has been lower for Wisconsin providers than for Minnesota providers, which is one of the complicating factors," said Goerdt. "But, it impacts the sustainability and viability of mental health providers in Douglas County, which is an issue for border communities."

Goerdt said that may deter mental health providers from setting up practices in Wisconsin.

Public health and community partners in Douglas County have lobbied state agencies and lawmakers for years to obtain the necessary funding or support to provide mental health services.

Last year, Republican lawmakers approved a $588 million spending increase for Medicaid and related programs under the current two-year state budget, which largely boosted payments for nursing homes. The budget included $13.3 million in the form of Medicaid crisis intervention benefits to help ease the financial strain on counties responding to individuals in crisis. However, the spending increase did not include a federal expansion of Medicaid funding and was roughly $187 million less than Evers' proposal.

Goerdt said the Douglas County team has committed to six goals to reform crisis response as part of the three-year grant. The goals include increasing peer support and respite services. They also include a proposal to create coordinated crisis response protocols that would be shared among law enforcement, emergency services and community partners.

North Country's Gilbertson said they want to transform crisis prevention and response in the county.

"My hope is that this continues to strengthen our mental health, community response and bring in additional partners so that even though the grant ends in about three years, that we can still be stronger together and, and moving forward," said Gilbertson.

The team hopes their work will streamline response and provide local hospital-based interventions that will help prevent a person from reaching crisis and keep them connected to supports within the community, as well as reduce the stigma surrounding mental health.