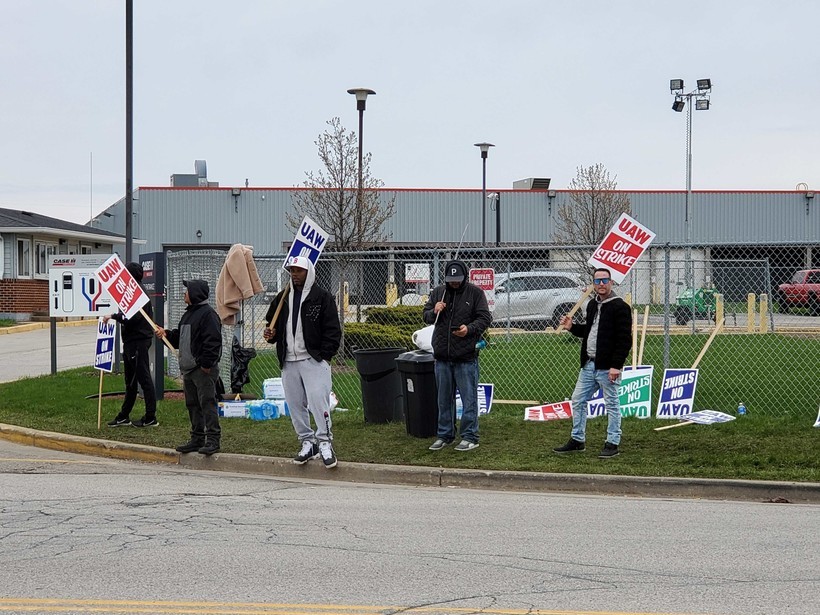 UAW Local 180 members picket outside a CNH Industrial plant in Racine County Thursday, May 5, 2022. The workers have been on strike since Monday in what a union representative said is a dispute over pay, workplace safety, and benefits. Christine Hatfield/WPR

Almost 700 union workers for a Case tractor factory in Racine are in their sixth month on strike with no clear end in sight.

United Auto Workers Local 180, which represents Case employees, and the company have been unable to reach an agreement on pay and benefits. CNH Industrial is employing replacement workers while the strike continues.

The strike comes as labor shortages and the COVID-19 pandemic have emboldened workers to demand better pay and benefits in various sectors of the economy.

"We have a fundamental, principle disagreement in the way they're handling their business — and our members are determined to either get what they deserve, or whatever the chips hold," he said. "I don't know what the future holds for us. But at this point, our membership is resolute in the fact that we need to be compensated fairly."

In September, CNHi reportedly offered the union wage increases between 18 and 25 percent over the next three years, and offered three different health insurance plans, according to a full-page ad the company took out in the Racine Journal-Times. The company didn’t immediately respond to Wisconsin Public Radio's requests for comment.

"When we reach an agreement and the strike is over, we will welcome all of you back to work," CNHi said in the advertisement.

Even with the new proposal, Glowacki said the Racine facility’s workers would be underpaid compared to other local manufacturers. He said other factories in the area are paying $24 to $25 per hour. Under the prior agreement, which expired before the strike, he said Racine's CNHi assemblers made $20.93.

"The company pays all their other North American facilities (employees) between $26 to $27 an hour to assemble the product that they assemble in those plants," he said. "We can't even get the company anywhere near that number."

Glowacki said the three insurance options offered by the company also wouldn’t match the insurance workers received under the previous contract. The benefits also could change from year-to-year, he said.

"It's basically going to be a moving target. (We) will never know what changes from year to year," he said. "What my members would be voting on, if we were to vote on something at the end of 2022, could be significantly different by the end of the agreement."

UAW workers in Racine aren’t the only ones protesting CNHi. The UAW chapter for CNHi’s Burlington, Iowa facility also continues to strike, according to Glowacki.

"UAW CNHi members have worked through the pandemic after the company deemed them essential, to produce the equipment that feeds America, builds America and powers the American economy," UAW President Ray Curry said in a press release when the strikes began.

Laura Dresser, associate director of the COWS economic think tank at the University of Wisconsin-Madison, said tight labor markets and the COVID-19 pandemic have put more power in the hands of workers.

"I think workers feel like they learned something about their value during the pandemic, and they don't see that honored," Dresser said. "And so, I think that you see workers stepping up more for that reason."

Following recessions in 2001 and 2007, she said unions made concessions to companies during negotiations as they faced threats of shuttering plants when the manufacturing sector contracted.

"The dynamics there were about firms threatening to shut plants or move production without concessions, (telling workers), 'If you don't concede this, we'll just move,'" Dresser said. "It was a credible threat. A lot of plants did move."

Glowacki said the UAW in Racine faced a similar situation in 2004. At that time, CHNi workers in Wisconsin, Iowa, Illinois and Minnesota called a strike after contract negotiations broke down. When workers voted to end the strike after 19 days, the company locked union employees out for another 17 weeks. In the end, workers accepted a contract that included concessions.

"We took a strike in '04 that took $100 million out of our contract and nobody blinked an eye or worried one bit about what the workers had to endure since then," he said. "It's been 17 years that we've been fighting to get back to the point we were at in 2004 — and we're still not there yet."

Amid the tensions between the union and CNHi, two of the company’s replacement workers were killed and four were injured when a van carrying them crashed near Milwaukee last week, according to The Associated Press. The company issued a statement sharing sympathies.

"Our heartfelt condolences, thoughts and prayers go to the families of the victims, those workers who were injured and those who were involved in the accident," the statement read.

When the strike began in May, CNHi said in a statement that it would work to reach an agreement with the union.

"CNH Industrial is disappointed that the parties were unable to reach an agreement and that the UAW has decided to call a strike," the statement read. "We will continue to negotiate in good faith and trust that the Union will do the same."