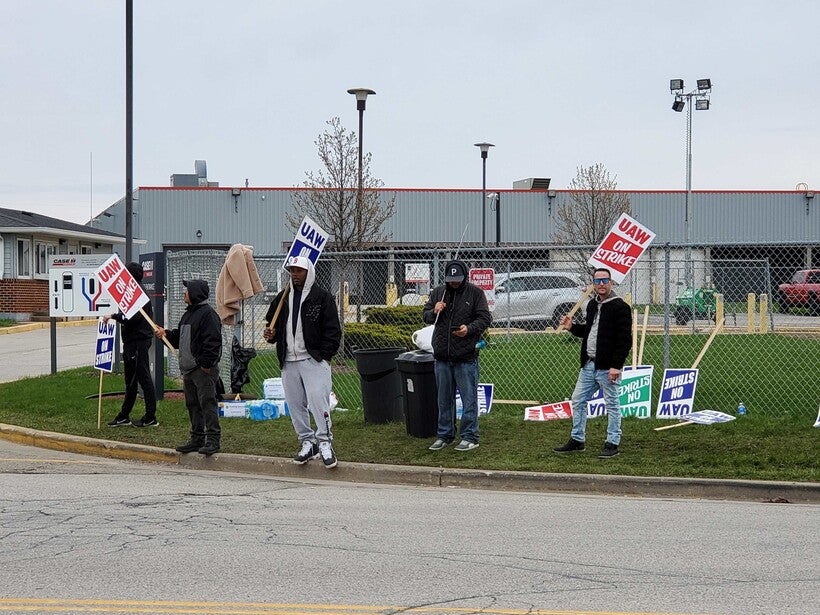 UAW Local 180 members picket outside a CNH Industrial plant in Racine County Thursday, May 5, 2022. The workers have been on strike since Monday in what a union representative said is a dispute over pay, workplace safety, and benefits. Christine Hatfield/WPR

CNH Industrial employees in Racine represented by the United Auto Workers labor union have been on strike for almost a full work week. A local union representative said they're fighting for higher wages and better COVID-19 protections.

Members of UAW Local 180 bundled up as they picketed Thursday outside the CNH plant where Case tractors are made.

A collective bargaining agreement between the union and the company lapsed at noon on Monday. According to the UAW, more than 1,000 members are on strike at CNH locations in Racine and Burlington, Iowa.

Richard Glowacki, chairman of the union's bargaining committee and president of the UAW CNH Council, said spirits are high.

"People want to continue with the strike because they want to see some fairness in the workplace, and at this point, we're going to do everything we can to get a fair agreement," Glowacki said.

Glowacki said the company's response to the COVID-19 pandemic has been a sticking point. In a Wisconsin manufacturing survey released last week, only 16 percent of businesses said managing the impact of COVID-19 was still a major concern.

"We just went through a pandemic where we were considered critical essential infrastructure workers, and the union didn't believe the company did everything that they could to protect our workers," Glowacki said. "We still have people coming down with COVID, we still have those issues, we pretty much have dropped all of our safety protocols — it's very lax in the plant, so they think it's all over, but in reality, it isn't."

Glowacki said what CNH is offering in terms of benefits "is completely unacceptable." He said the biggest part of negotiations is wages.

"There's plenty of corporations here in town that are smaller than CNH, paying considerably better wages than they are," Glowacki said.

Steven Deller, professor of agricultural and applied economics at the University of Wisconsin-Madison, said unions like the UAW are playing catch-up after years, if not decades, of making concessions.

"With the labor shortage the way it is, I think that unions are saying, 'Now's the time that we can actually put pay on the table and start to make up some lost ground,'" Deller said.

The strike is the latest in a spate of nationwide union action during the COVID-19 pandemic, including strikes by Kellogg's workers and unionization efforts at Starbucks across the country, including in Wisconsin.

"At a minimum, it's a way to send a signal to management of saying, 'Hey, we're not happy, you need to do something,'" Deller said.

Deller said conflict between workers and their companies often hinges on how the companies treat their employees.

Glowacki said the union will stand its ground.

"We're always ready to sit down at the table," Glowacki said.

A CNH spokesperson declined to offer specifics on the negotiations.

"It's a poker game, and they're holding their cards very close to their vest, and that makes perfect sense," Deller said.

CNH said in a statement it's working to reach an agreement with the union.

"CNH Industrial is disappointed that the parties were unable to reach an agreement and that the UAW has decided to call a strike," the statement read. "We will continue to negotiate in good faith and trust that the Union will do the same."