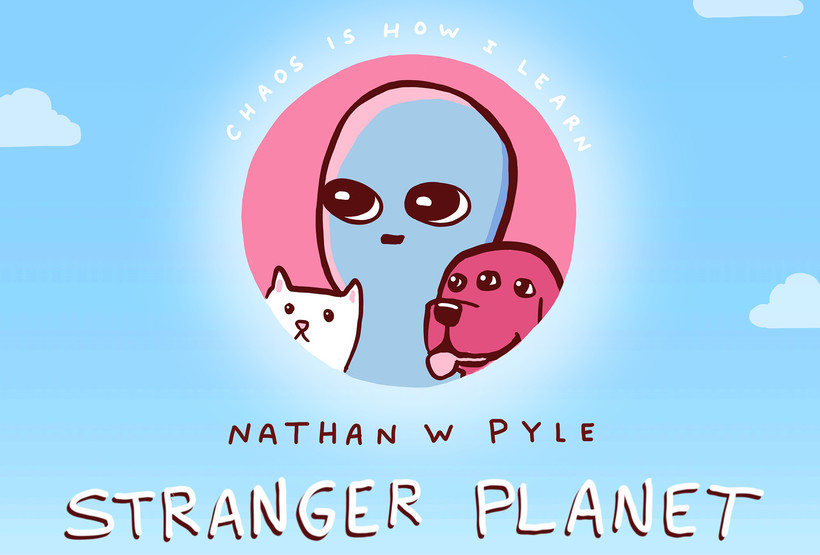 We love cats despite their ambivalence for us, hide our stuff to keep our homes looking tidy and lay in the sun for that coveted bronze glow, and it all seems pretty normal.

That is, until the inhabitants of Strange Planet take our idiosyncrasies and strip them of context and colloquialism.

With round blue bodies and a very literal way of communicating, the beings created by Nathan Pyle and his wife, Taylor, put their own spin on what's traditionally human — like giving someone a card showing an arrow piercing a heart. 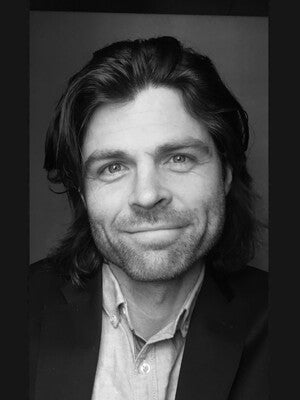 "I drew a vital organ being wounded," one being says to another. "Also, these are dying," the being adds, offering plucked flower stems to the other.

These beings, whose lives are chronicled through the more than 400 illustrations done by Pyle and his wife, are fan favorites. The illustrations have garnered millions of likes, shares and follows across social media platforms and are now the subject of Pyle's second book, "Stranger Planet," released Tuesday.

"It ultimately is a celebration of humans," Pyle said of his creations. "We care a lot about each other, and I think that's part of why it's been successful — it's positive towards humans."

Like blowing on candles to celebrate another revolution around the star or "trapping carbon dioxide in ephemeral spheres" (blowing bubbles), the alien-looking beings in comic strip form soften our regard for our own habits and traditions — our unbridled love of animals, our obsession with clean houses, our penchant for "jitter liquid" (coffee) in the morning and "mild poison" (alcohol) at night. 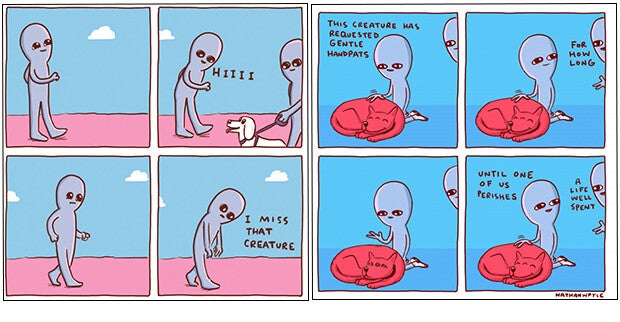 "I think it's one of the most useful aspects of Strange Planet, that we would be pretty strange if someone were to observe us from the outside," Pyle said. "We're observing another species from the outside, and we get a chance to see how quirky and yet lovable they are."

In one of the comics, the beings agree to "store irregular shapes inside shapes with flat surfaces." When friends arrive, they comment on how the house looks beautiful.

"Thank you," the beings reply. "We own things, but have hidden them."

That comic was inspired by a situation that Pyle and his wife found themselves in shortly after they were married. They had been trying to clean their small Manhattan apartment ahead of guests arriving for a party. With no room to fit all of their appliances on the counter, they hid their toaster in the closet.

"Hiding all of our possessions so that our friends would think that we cleaned up is one of the first inspirations for Strange Planet," Pyle said.

Pyle, a storyteller and artist, has also been working on another project of sorts recently: helping others learn to draw through videos he posts to social media.

"One of the basic concepts any artist will tell you is that if you can draw the alphabet, you already know how to draw all the shapes that you need to draw infinite number of creatures, infinite number of imaginary objects," he said.

if u can write the word ✨GLITTER✨ you can draw a dog pic.twitter.com/NjGfJHkM2I

Pyle said people can start by drawing to figure out what they can actually draw. Talking about how they've succeeded or failed at drawing is, in itself, a story.

"You don't even have to leave your house to do that," he said.

A New Colorful Guide For Existing On Our Strange Planet 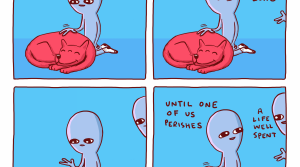 The author of a famous online comic about aliens learning to navigate daily Earth circumstances joins the show to talk about his latest book.

Survey: Nearly Half Of Wisconsin Manufacturers Say Business Still Down
Spring Training: After Season Shaped By Coronavirus, Brewers Prepare For More Normal 2021
Seven-Day Average Of COVID-19 Cases Remains Steady Around 630
More Than Half Of Wisconsinites Age 65 And Over Have Received First Dose Of COVID-19 Vaccine
$322M In Rental, Utility Assistance Available For Those Facing Housing Instability
More WPR News