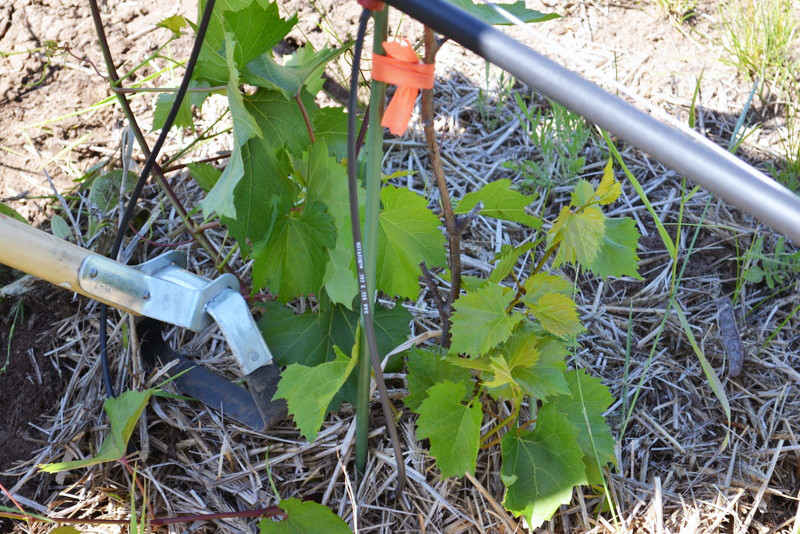 Vines being grown as part of an experimental farming project examining the health benefits of grapes.

Compound In Fruit And Vines Could Help The Heart, According To Some Studies
By Glen Moberg
Share:

A research project in central Wisconsin is examining the health benefits of the grape.

UW-Stevens Point and one of the region's leading vegetable growers have just completed the first season of an experimental farming project.

The crop is being grown not for food, but for a food supplement.

Anyone who's ever watched "The French Chef" with Julia Child is probably aware of something called the French paradox: How do the French stay healthy with all the fatty food they eat? It’s a question that intrigues Paul Fowler, the head of the Wisconsin Institute for Sustainable Technology at UW-Stevens Point. "The French paradox, which is the French eat a high fat diet, but their risk or occurrence of heart disease is relatively low," he said. "So that was attributed to red wine."

It's often assumed that the health benefits from a glass of red wine come from the fermented grapes. But Fowler said the benefits actually come from an antioxidant that's in them.

Resveratrol is marketed in pills and capsules as a health supplement, with alleged benefits that include lowering the level of so-called bad cholesterol. Fowler said there may be other benefits.

Fowler said the chemical is not only found in the grapes that make the wine, but in the stems of the grape plant, which are pruned each season and usually thrown away.

"Yes, some exciting opportunities I think around the stems, the prunings, the utilization of the whole of the plant," he said.

So Fowler and UW-Stevens Point are growing grape vines with the help of Dick Okray, one of the leading vegetable growers in central Wisconsin. Okray said the research may prove beneficial.

"We do believe that this is going to result in pharmacological products for extending life," he said. The test plot is in central Wisconsin, near Plover. Glen Moberg/WPR

The study involves 1,500 vines on the experimental plot beside Highway 54 near Plover, which is growing many cold-tolerant varieties of grapes that can survive a Wisconsin winter.

Fowler said the harsh climate is important for the experiment, because the levels of resveratrol go up when the plants experience the stress of cold weather.

"We're striking a balance really, a grape which can tolerate the cold to a certain extent, but also respond to that cold weather," said Fowler. "So the idea is that by planting them in a cold climate, in a harsh climate, the production of resveratrol will be naturally enhanced."

Fowler said the Food and Drug Administration hasn't weighed in about resveratrol, but there are a lot of preclinical trials and literature which point to beneficial effects.

And if the supposed health benefits of resveratrol prove to be illusory, Fowler said there is an industrial market for the antioxidant as an additive to lubricants and plastics.

"The plastics industry, which is huge in Wisconsin," he said. "Lubricants and energy where antioxidants are used all the time in great quantity."

Dick Okray knows the business of agriculture, and he said he can see the opportunities.

"You have to be able to make money at a project in order for it to remain sustainable," said Okray.

Preliminary tests show the presence of resveratrol in the prunings from the recently completed growing season.