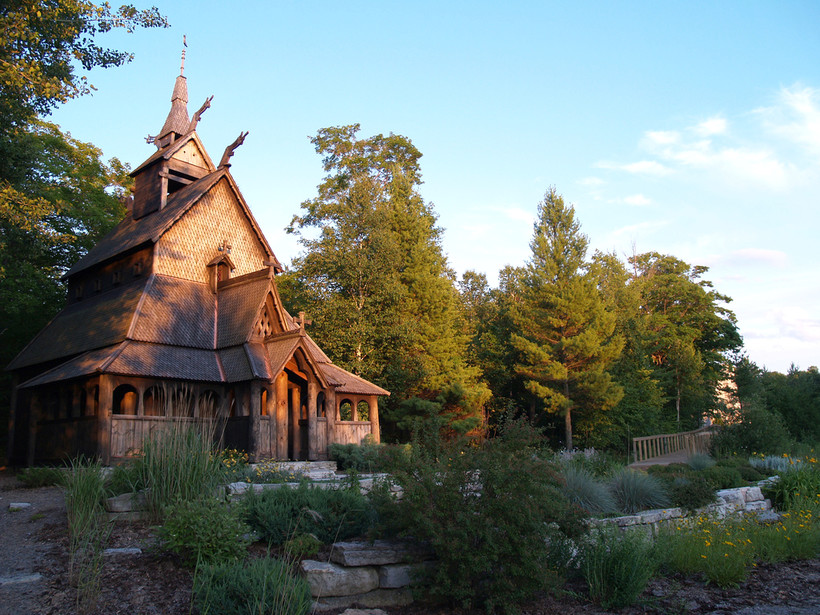 Stavkirke Was Modeled After Style Of Church Once Common In Middle Ages
By Chris Malina
Share:

In the Middle Ages, it wasn’t uncommon to see "stave churches" made of wooden posts and pillars scattered throughout Scandinavia.

Today, there aren’t many of the churches left, but there’s a growing interest in building new churches that resemble the style — a prominent example of which stands on Washington Island in Wisconsin's Door County.

It’s estimated that about 1,300 of these churches once existed throughout Norway and Sweden.

“People are looking back with some nostalgia and looking at the beauty of the existing style of churches in Norway, and wanting to recreate that here,” said Richard Purinton, a Washington Island resident who helped build the church known as Stavkirke, which belongs to Trinity Evangelical Lutheran.

Purinton said the designers and builders tried to emulate the old stave church style as best as they could, using one church in particular from Borgun, Norway, as a model.

“There were no detailed blueprints,” Purinton said.

Construction of the wooden and stone church took three years to complete. Purinton said he’s proud of the way it turned out, especially its aesthetics.

“There’s kind of a softness and elegance to it,” he said.

Purinton gives tours of the island and enjoys observing people’s reactions to the structure. He said there’s often a sense of awe, and a feeling of being overwhelmed.

During the summer months, there’s even a weekly service people can attend, and the church has been known to host the occasional wedding.

“It’s open for visitation, meditation, and for people to appreciate it,” said Purinton.