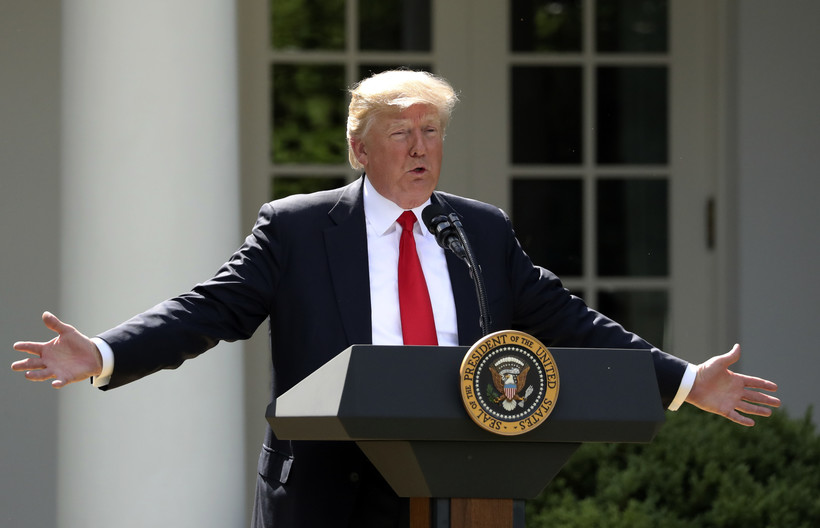 President Donald Trump speaks about the U.S. role in the Paris climate change accord, Thursday, June 1, 2017, in the Rose Garden of the White House in Washington. Andrew Harnik/AP Photo

The Trump administration has officially begun the process to withdraw the United States from the Paris climate agreement. Roughly 200 countries have signed onto the agreement to help curb greenhouse gas emissions from 2005 levels.

President Donald Trump announced the U.S. would withdraw from the agreement in 2017 and notified the United Nations of his intentions Monday.

The move to officially pull out of the deal is disappointing, but not surprising, said Elizabeth Ward, conservation programs director with the John Muir Chapter of the Sierra Club. Even so, she said states like Wisconsin are forging ahead to reduce carbon emissions.

The state is among a bipartisan coalition of 25 governors who have affirmed their states’ commitment to meeting the goals under the Paris climate agreement, according to a statement from the U.S. Climate Alliance.

Ward said at least 1 in 4 people live in a city or county that have made similar pledges, including Eau Claire, La Crosse, Madison and Milwaukee County.

In addition, major utilities serving the state also plan to cut 80 percent or more of carbon emissions by 2050, including Madison-based Alliant Energy and Milwaukee-based WEC Energy Group which owns We Energies and Wisconsin Public Service.

Even so, he acknowledged the challenges facing utilities to meet those goals, such as reliability and affordability for ratepayers as they transition to renewable sources like wind and solar. Stoering said the development of new technology is necessary to achieve a goal of 100 percent carbon-free electricity in the next three decades.

As some utilities and communities forge ahead, Republicans like Assembly Speaker Robin Vos, of Rochester, have questioned whether climate change is real although he said it "probably is." Vos criticized the governor’s task force last week. However, he also noted he could support the group’s work if it focuses on increasing nuclear power and doesn’t translate to increasing utility rates, according to the Associated Press.

Senate Majority Leader Scott Fitzgerald, R-Juneau, who is running for Congress to replace outgoing republican U.S. Rep. Jim Sensenbrenner, called the Paris deal a "losing agreement" in a statement from his campaign.

"President Trump is keeping another promise to the American people by withdrawing from the Paris Climate Accord. This losing agreement failed to hold all nations to the same standard, put the U.S. at an economic disadvantage, and hurt states like Wisconsin, where we rely on manufacturing as a cornerstone of our economy," said Fitzgerald in the statement. "I'm glad to see that President Trump is keeping his promise and putting America first."

Rep. Mark Pocan, D-Madison, told WPR’s "Central Time" that the Paris climate agreement is a small deal, which is why most countries have signed onto the emissions reduction pledge.

"You really sometimes need those big market players like the United States to make the changes to then have that be the industry standard, cleaner standards across the planet," said Pocan. "That’s why it’s so important for us to be taking part in this."

Dylan Jennings agreed the lack of support at the federal level may hurt efforts to address climate change. Jennings, a tribal council member with the Bad River Band of Lake Superior Chippewa, serves on Evers’ Climate Change Task Force. He said tribes, states and local communities are moving forward despite inaction at the federal level.

"Our harvesters see these impacts firsthand and whether that’s in the disappearance of large paper birch trees or when we see non-native species out-competing native species and the plummeting of some of our fish populations and also with manoomin — wild rice — struggling to thrive as it once did," said Jennings.

A U.N. panel report released last year found children, the elderly, low-income, minority and indigenous groups are expected to feel the worst impacts of climate change as temperatures rise across the globe.