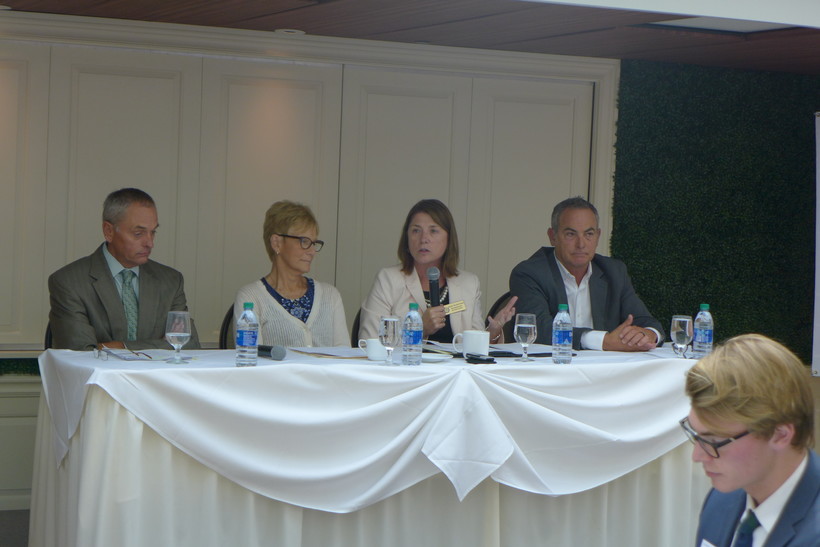 Lawmakers from both sides of the aisle talk about bills that would regulate pharmacy benefit managers, license dental therapists and allow medical marijuana at a Wisconsin Health News forum Tuesday, Sept. 10, 2019, in Madison. Shamane Mills/WPR

States across the country are taking action to control rising prescription drug costs. Wisconsin has its own bill in the works, but the Legislature has yet to take action on it.

Thirty-three states have passed laws pertaining to pharmacy benefit managers or PBMs, according to the National Conference of State Legislatures. These middlemen have been the focus of consumer complaints and increased scrutiny from politicians.

Pharmacy benefit managers administer prescription drug coverage for insurers and employers. They process claims and negotiate discounts. Many have what’s been dubbed a "gag rule" which prevents pharmacists from telling customers they could save money on some drugs if they pay out of pocket instead of using insurance.

"I just got a prescription for a generic (drug) and my pharmacy benefit manager will not let me have the generic because they get a kickback on the formulary. So instead of paying my $5 copay for the generic I paid $35," said Rep. Mary Felzkowski, R-Irma. "Now I'm very fortunate. I can afford that. Not everyone can. So this is a real issue."

Felzkowski is one of a hundred sponsors of the bipartisan bill that would attempt to lower prescription drug costs and provide more information to Wisconsin consumers about the true cost of their medication.

But Felzkowski said at a Wisconsin Health News forum Tuesday in Madison that it may be "too extreme" to get more Republicans on board.

"I wrote a very small PBM bill and I said to people 'You’re going to wish this is the bill that passed.' It was very minimal in regulation," said Rep. Deb Kolste, D-Janesvillle.

Small pharmacies in Wisconsin have pushed for oversight of pharmacy benefit managers. Rep. Joe Sanfelippo, R-New Berlin, said at the forum he is concerned about PBMs but noted employers rely on them to control prescription drug costs.

All those on Tuesday's panel noted that many of the health care bills that could be considered this session have bipartisan support. Though there are glaring exceptions like Medicaid expansion under the Affordable Care Act and state legalization of medical marijuana.

But bipartisan support doesn't ensure a bill will be taken up or get support outside of the Capitol. Insurance companies currently oppose other proposals including one on direct primary care where doctors offer patients services for a flat fee. Another bill that would license dental therapists is opposed by the Wisconsin Dental Association and the Marquette School of Dentistry.