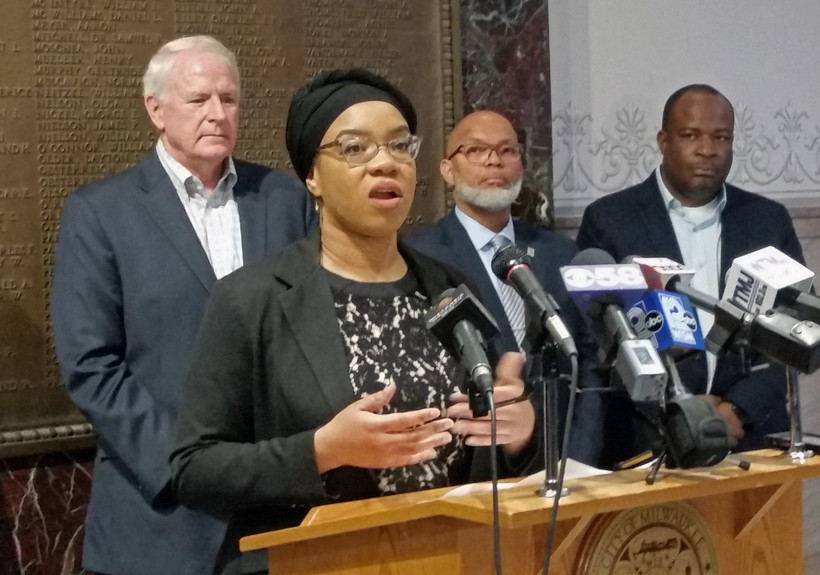 Sumaiyah Clark of the Milwaukee Office of Violence Prevention speaks at a Tuesday news conference, about trauma-informed care in the city. Chuck Quirmbach/WPR

A Wisconsin pediatrician is recommending closer attention be paid to what appears to be the slightest injuries on very small children. The issue is part of a statewide discussion on childhood trauma and its lasting effects. Dr. Angela Rabbitt is an associate professor at the Medical College of Wisconsin. She spends one day a week at a Children's Hospital of Wisconsin clinic in Elkhorn that helps abused and neglected kids.

"Sentinel injuries are things like bruises, mouth injuries, or other seemingly milder injuries in infants who are not developmentally able to cause the injuries to themselves," Rabbitt said. "What we see, in research at Children's Hospital and the Medical College, is that infants who present with more severe injuries often have unrecognized sentinel injuries, that — if they had been responded to appropriately — might have prevented the escalation of the abuse."

Rabbitt told Gov. Scott Walker and First Lady Tonette Walker that more medical personnel and law enforcement should be trained to look for these injuries, during a roundtable discussion Tuesday morning at the Elkhorn clinic

Meanwhile, more Wisconsin communities are training local employees to be aware of families dealing with trauma.

"And the reason for that is obvious, often times, it is the firefighters who are the first ones on the scene, have the most interaction, and in many instances are easier to connect with our residents sometimes than our police officers," Barrett said at a news conference Tuesday at Milwaukee City Hall.

Barrett says he's committed to Milwaukee being a "trauma-informed city," acknowledging childhood trauma can lead to mental illness and other health and behavior problems.