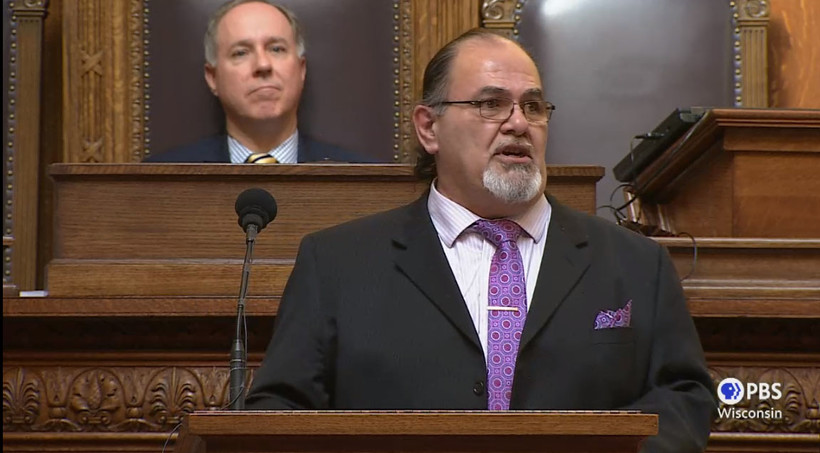 Ned Daniels Jr., chairman of the Forest County Potawatomi Community, delivers the State of the Tribes address at the State Capitol on Feb. 17, 2020. Assembly Speaker Robin Vos sits behind him. PBS Wisconsin

Native American tribes in Wisconsin are struggling with issues like the opioid crisis and violence against women. But they continue to be fundamental contributors to Wisconsin's economy.

That was the message of this year’s State of the Tribes address, delivered Tuesday by Ned Daniels Jr., chairman of the Forest County Potawatomi Community.

Speaking at the State Capitol, Daniels focused on the devastation of the opioid epidemic, which has left him and his wife raising some of their grandchildren.

"Sadly, my story is not unique. Native communities across Wisconsin have been hit especially hard by the opioid epidemic. There are hundreds of families like mine who are now caring for the young ones of relatives because of opioid addiction," he said.

In 2018, Native Americans had the highest rate of opioid deaths of any ethnic group in Wisconsin.

He also praised Rep. John Nygren, R-Marinette, for his efforts to expand the Heroin, Opioid Prevention and Education (HOPE) Agenda, and highlighted other legislative pushes, like water quality improvement efforts and a proposed task force on murdered and missing tribal women.

Daniels stressed that Native American people are "far more than just the operators of casinos." They have influenced everything from the names of Wisconsin’s cities to the present-day economy, he said.

"We employ thousands of Wisconsin residents and are the largest employers in many of the counties where we are located," Daniels said.

Wisconsin currently ranks 38th in the nation for internet access, but the state has set a goal to make affordable broadband available to all Wisconsin residents by 2025.

Daniels said it’s important for tribes and the state to work together on these issues, and for tribes to maintain their sovereignty.