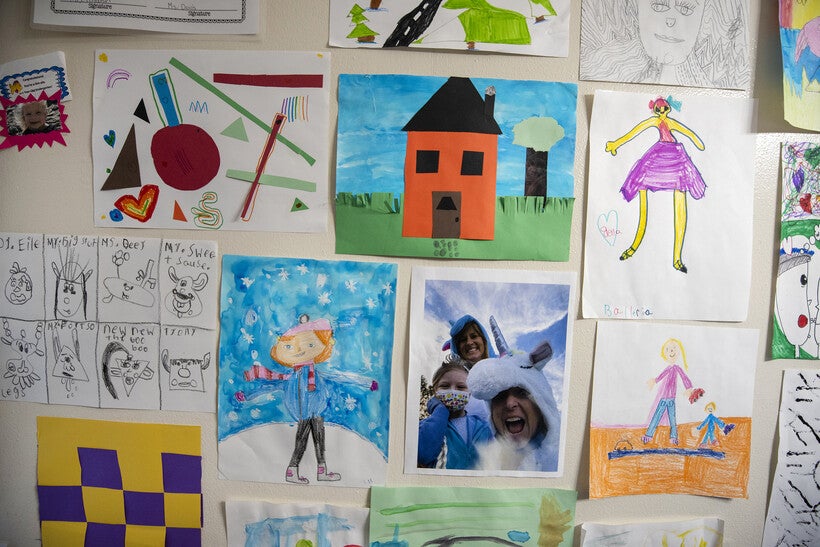 Art that second-grader L.B. created during virtual school is hung on the wall at her home Thursday, March 17, 2022. Angela Major/WPR

In a speech Thursday, the superintendent spoke about racial disparities, LGBTQ+ issues and special education
By Leah Treidler
Share:

In her State of Education Address Thursday, state Superintendent Jill Underly spoke about the challenges facing schools — from students' mental health to stark racial disparities. But Underly said educators are struggling to tackle those issues because they lack adequate funding.

Public education requires all students to succeed, she said, but Wisconsin isn't meeting that standard.

According to the Wisconsin Policy Forum, in the 2020-2021 school year, Black students' graduation rate was 66.6 percent, about 23 percentage points below the state average. The rate among economically disadvantaged students was 78.4 percent, compared to 93.9 percent among white students overall.

But in a statement after the speech, Republican Sen. Alberta Darling, chair of the Senate Education Committee, said Wisconsin students' poor performance stems from Gov. Tony Evers "refusing to reform education in Wisconsin" despite Republican efforts, including a literacy bill Evers vetoed twice.

Darling said Underly is following in his footsteps.

“The DPI Secretary refuses to acknowledge failure," Darling said. "Under her watch, too many children in our schools are failing. There was not a single acknowledgment that less than one-third of students are proficient in English or Math. Instead of accepting we have the largest achievement gap in the country, she’d rather change the definition."

Underly, however, outlined ways to improve student achievement and bridge racial disparities. She said policymakers and educators need to recognize that those disparities stem from a gap in representation and engagement, not the student.

"Instead of blaming the student because of their learning challenges or their family, because their parents are working multiple jobs to get by, or their school district or teachers are under-resourced," Underly said, "instead of placing blame about their achievement, we can make important choices about curriculum that can make a difference."

That includes increasing representation in curriculum, she said. All students, especially students of color, need to see themselves reflected in what they learn, she said, and not just learn about trauma and struggle, but also growth.

"The only way to teach the complete story of the United States is to include the history of racism," she said. "After all, the founding of this country included both slavery and democracy, and denying the centrality of slavery and racism just because it's uncomfortable, does nothing but endanger the continuation and strength of our democratic society."

Educators also need to recognize each students' needs and meet them where they're at, instead of leaning on a one-size-fits-all approach, Underly said.

Schools have become the site of political battles in recent years, with parents, politicians and educators fighting over what to teach in history class and which books to leave on library shelves. LGBTQ+ issues have been the center of many of those arguments, with conservative groups accusing schools of overstepping their authority and indoctrinating students.

On Thursday, Underly said educators need to make schools a safe, affirming space — where all students feel comfortable learning. But in this political environment, Underly said doing that is a challenge.

Schools across the state, including in Madison and Eau Claire, have been subject to lawsuits over their policies allowing transgender and non-binary students to use their desired pronouns and make other changes that affirm their identity at school without parental consent.

But to make any of these changes, she said the Legislature needs to bolster funding for public education.

Schools are being asked to do more with fewer resources, she said.

But in the last budget, she said the Legislature used federal pandemic relief funds as an excuse not to raise education spending.

Investing in schools should be nonpartisan, Underly said.

In 2002, Wisconsin's per-pupil funding was 11th highest in the country, but it hasn't kept pace with national growth. In 2020, Wisconsin ranked 25th, spending 6 percent less than the national average.

The state has a $5 billion budget surplus. Underly said some of that money should go toward education.

Earlier this month, Evers and Underly unveiled a proposal to boost funding for K-12 schools by $2 billion in the next state budget by tapping into that surplus.

The proposal would dedicate money toward supporting students' mental health, improving financial literacy and cutting school meal costs. It has slim chances of passing the Republican-controlled Legislature, but it underlines Evers and Underly's priorities.

"The history of public schools in Wisconsin is one of innovation and meaningful and sustained investment," Underly said. "We do not see that investment today. We must think critically about how that is impacting our children and our state, and we must make a different decision."

In a statement after the speech, Tim Michels, the Republican candidate for governor, said Underly's speech "failed to provide Wisconsin taxpayers and families any information on the actual state of education," calling it a "political stump speech."

"Tony Evers and Jill Underly are focused on imposing woke politics and gender ideology in the classroom," Michels said. "We need education that teaches kids how to think — not what to think. Evers and Underly believe pronouns save lives. I believe that literacy and quality education saves lives."