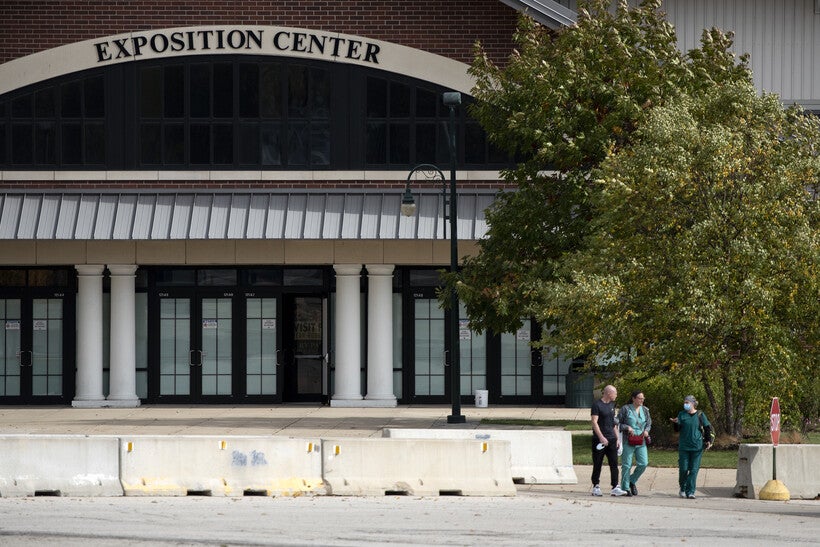 At a time when hospital systems around Wisconsin are overwhelmed by new COVID-19 patients, a state-run field hospital in West Allis has just 15 people in its care.

The Alternate Care Facility opened at the Wisconsin State Fairgrounds in West Allis on Oct. 14 with the intent of helping inundated hospitals by providing space for COVID-19 patients who are not seriously ill but still recovering. When it opened, health officials said up to 50 patients could be treated there, and that as operations ramped up, it could eventually facilitate treatment for up to 530.

For some patients from central and northern Wisconsin, the facility has proven out of reach. Others that could have gone there have refused.

WPR looked into the status of the Alternate Care Facility in response to a question submitted to WHYsconsin: "What is the current patient count at the COVID-19 field hospital at the State Fair Park grounds? How has that count changed in recent weeks as the virus has surged in Wisconsin?"

On Nov. 2, the Mayo Clinic Health System began deferring some elective procedures at hospitals in Northwestern Wisconsin to make more space for COVID-19 patients. A statement from administrators pleaded with residents to wear face masks and avoid crowds, noting that 100 percent of its hospital beds in the region were full.

Jason Craig, the Mayo Clinic's regional chair of administration for northwestern Wisconsin, said in an email to WPR that sending patients across the state to the West Allis care facility was not a viable option for freeing up more hospital beds.

"We have not transferred patients to the West Allis field hospital," said Craig. "Given the distance from Eau Claire to the site, it is unlikely our patient population would be appropriate for that type and distance of transfer."

UW Health in Madison has sent two patients to the alternate care facility, according to a spokesperson. Chief Quality Officer Jeff Pothof told WPR that the field hospital is a good fit for COVID-19 patients who have gotten past the worst symptoms and complications but aren't well enough to go home.

But Pothoff said most patients have declined to be transferred from their hospitals.

Pothof said even when staff educate patients on how going to the alternate care site could open up hospital beds for those who are critically ill, they still refuse.

At this point, Pothoff said UW Health's network of hospitals still have room for new patients. He said if that changes, the state Legislature or Gov. Tony Evers may have to consider laws or executive orders mandating that patients use the alternate care facility if able.

"Maybe it needs to be a non-optional thing, you know: Field hospital, or we got to let you go," said Pothoff.

In an email to WPR, a spokeswoman for Froedtert and the Medical College of Wisconsin said five patients have been transferred by ambulance to the Alternate Care Facility since it opened Oct. 14.

In response to an interview request, a Department of Health Services spokesperson said no one would be available to answer questions in time for this story's publication.

During a DHS COVID-19 briefing on Thursday, Deputy Secretary Julie Willems Van Dijk was asked whether DHS plans to open other alternative care facilities around the state for COVID-19 patients and infected long-term care residents. Van Dijk said the main objective is to keep people from going to the hospital in the first place.

"And so let's not forget that it's on each of us to take action to plateau and decrease the spread of the disease, which will decrease the source of this surge in the first place," said Van Dijk.

She said that includes being vigilant about wearing face coverings and avoiding crowds.

"And we're working on ways to enhance the alternate care facility ... to further look at the admission criteria around how we can further care for patients," said Van Dijk.