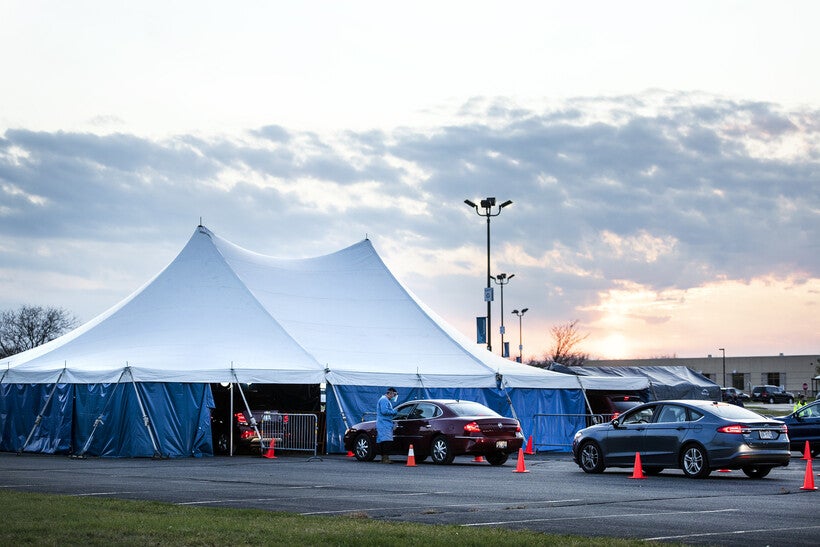 Drivers wait in their cars before driving into a tent to receive a COVID-19 test Thursday, Nov. 12, 2020, at Blackhawk Technical College in Janesville. Angela Major/WPR

State Officials Encourage Wisconsinites To Keep Getting Tested For COVID-19

New reports of COVID-19 cases continue to decline in Wisconsin, based on the latest data from the state Department of Health Services. But DHS officials warn the state continues to see a significant number of new cases daily.

There were 68 new deaths from COVID-19 reported Tuesday.

Of the people who got tested for COVID-19 over the past week, 30.5 percent were positive for the disease, according to DHS. That rate has been declining slightly over the last few days.

On Sept. 30, DHS also introduced an alternative positivity rate, one that measures the percentage of tests that are positive, instead of the percentage of people who get a positive result. The new metric takes into account people who have been tested multiple times. The seven-day average for that number is at 13.1 percent.

During a media briefing on Tuesday, DHS Secretary Andrea Palm said the high test positivity rate indicates that the state is not doing enough testing to understand the true prevalence of the virus. She said officials are concerned to see a decline in the number of people getting tested for the virus in recent weeks.

"We’re all sort of scratching our heads about it considering the high level of new daily cases that we continue to see," Palm said. "Often that motivates people to get tested because they understand the intense community spread, the prevalence in communities. They understand that they’ve been potentially in contact with positive cases or they know that they've been in contact with positive cases."

Palm said the state has the capacity to do more testing and encouraged anyone who needs a test to get one.

Traci DeSalvo, acting director of the DHS Bureau of Communicable Diseases, said the downward trend in new cases is a positive sign for the state. But she warned the average number of new cases is still incredibly high compared to earlier in the year.

"We are still seeing significant numbers of cases with the seven-day average near 4,000 cases. And you may remember back in the summer when we reached the 1,000 case per day average, that seemed very high," DeSalvo said.

According to the Wisconsin Hospital Association, there were 1,566 COVID-19 patients hospitalized as of Monday. A total of 18,500 people have been hospitalized because of the disease, or 4.4 percent of all positive cases.

The latest figures bring the overall total of positive cases in Wisconsin to 418,446, according to DHS. A total of 3,806 people in Wisconsin have died from COVID-19.

Wisconsin's daily testing capacity — based on the availability of test supplies and adequate staffing — has grown from 120 available lab tests in early March to 59,695 as of Tuesday. The number of actual people with new test results reported Tuesday was 9,591.