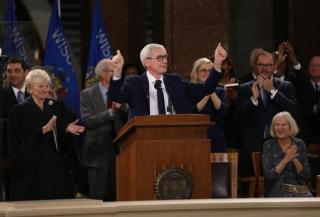 A new era of divided government began Monday at the state Capitol with the inauguration of the state Assembly and Senate.

Republican legislators continue to hold power in both legislative chambers, with a 63-36 majority in the Assembly and a 19-14 majority in the Senate. However, the GOP will not have a member of their party in the governor’s office for the first time since 2011.

In speeches following the inaugural ceremonies, state Republican leaders lauded the laws they passed during former Gov. Scott Walker's tenure, which came to an end just hours before, when Gov. Tony Evers took his oath of office in the Capitol rotunda.

"For the past eight years, you could say our state has been driving in the right lane of a three lane highway. We accomplished a lot in that right lane," he said. "With the newly elected statewide leaders, some will now claim Wisconsin voters want us to veer into the far left lane."

"There are some who will want us to take a back seat and allow the new governor to drive the car alone, but that isn’t going to happen," Vos said.

The speaker said lawmakers will work for bipartisan cooperation with the new governor.

"It’s easy to stay in your own lane and only associate with the people who agree with your own philosophies," he said. "But in Wisconsin, we shouldn't take the traditional choice, we can (take) the proverbial high road."

"Too often, our Legislature is characterized by division and debate within this hall," Fitzgerald said. "Today, let us be united by our shared vision of making Wisconsin a better place to work, live and raise a family."

"I challenge each of us in the next two years to stay committed and work through the messiness," Shilling said. "Wisconsin deserves it, our constituents deserve it, our communities deserve it."

But both parties offered few concrete examples of where they might cooperate, and GOP leaders suggested some of Evers' priorities could be non-starters in the Legislature.

Fitzgerald told the Associated Press that he didn't agree with Evers' plan to call for an increase to Wisconsin's minimum wage. He also said Republicans who have never experienced divided government need to be prepared for the process to slow down.

The biggest task ahead for lawmakers in the new session of lawmaking will be passing the next state budget, which is due June 30, 2019. Finding a solution to Wisconsin’s road funding challenges will likely be a major sticking point in negotiations.

"We can’t ignore that almost 55 percent of our roads will be in poor condition in the next 10 years," Vos said. "And our revenue sources are simply not bringing in enough to keep up with costs and the state continues to rely too heavily on borrowing."

Vos also said Assembly Republicans would introduce a bill that would mandate health insurance coverage for people with preexisting conditions, though a similar bill died in the state Senate just last month. Some Republicans view the bill as a mandate while Democrats have said it falls short of the protections provided by the federal Affordable Care Act.

Vos said lawmakers could work together on a middle class tax cut, although that may also cause conflict. Evers campaigned on a 10 percent income tax cut, but said it needs to be paid for by scaling back a tax credit for manufacturers. Fitzgerald said that would amount to a tax increase on businesses.

Evers will present his budget proposal sometime in the next few months, which will kick state spending negotiations into high gear.