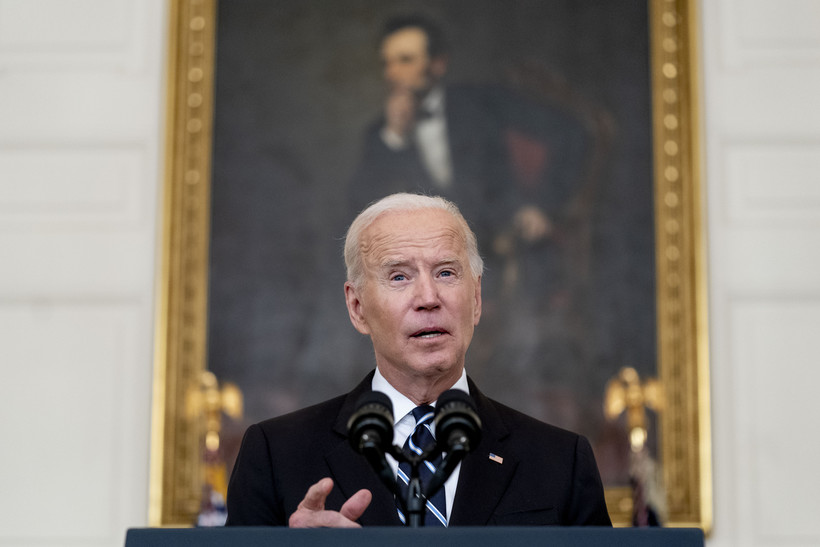 President Joe Biden announced Tuesday the U.S. will ban Russian oil imports to increase pressure on Russia as its troops continue their invasion of Ukraine.

The White House was initially reluctant to take the step due to concerns about its effect on Americans feeling the squeeze of rising gas prices amid soaring inflation. Even so, bipartisan legislation in Congress to ban imports fast-tracked discussions as lawmakers reached a deal Monday to advance a bill.

"The decision today is not without cost here at home. Putin's war is already hurting American families at the gas pump … and with this action it's going to go up further," Biden said.

Nationally, lawmakers are united on banning imports as they seek to punish Russia for its attacks on Ukraine, and a national poll found most Americans support a ban even if it means higher gas prices.

On Monday, oil prices climbed to levels not seen since 2008 as Brent crude prices settled at $123 a barrel. Gas prices reached a national average of $4.17 per gallon on Tuesday, according to AAA. In Wisconsin, gas now costs an average of $3.94 a gallon.

Gov. Tony Evers joined several governors in a letter urging U.S. Senate and House leaders to suspend the federal gas tax as gas prices have climbed more than 50 cents in the last week.

Oil and gas were notably missing from sanctions issued last week by the U.S. and its allies, according to Greg Nemet, an energy researcher and professor of public affairs at the University of Wisconsin-Madison.

He's empathetic to the burdens posed by increasing gas prices.

"To ask people to do even more does sound like asking a lot more. It's already painful, so I can understand the concern with that," Nemet said. "But the reason that we would be doing this is not to inflict pain on ourselves. It's to put pressure on Russia."

Russia is the third-largest oil producer after the U.S. and Saudi Arabia, according to the Energy Information Administration. The Wall Street Journal reported the U.S. imported only about 8 percent of oil and refined products from Russia last year, making the U.S. far less reliant on Russia than European nations.

Biden acknowledged that European allies may not be able to join the U.S. in banning imports. The president also highlighted his administration is releasing 30 million barrels of crude oil from the Strategic Petroleum Reserve as part of broader effort to ensure supply and soften the blow of price increases.

While the Biden administration and lawmakers may be aligned on making Russia pay, they’re largely at odds over America’s energy future.

Nemet said ramping up domestic energy production is unlikely to alleviate pain at the pump, adding that domestic oil production is already high. Despite Republican rhetoric, oil and gas drilling has increased under Biden as the economic recovery from the COVID-19 pandemic has driven up demand faster than global production.

"These are investments that go in the opposite direction of what we need to go to deal with climate change … and I think what they're going to end up doing is creating a big liability for the companies that have those investments as they become increasingly worthless as concern about climate change grows," Nemet said.

Companies have been slow to ramp up production after cutting back at the start of the pandemic as they face labor and equipment shortages along with pressure to move toward cleaner energy, according to the Associated Press.

While the clean energy transition also takes time, Nemet noted batteries and electric vehicles cost consumers less than gasoline over the life cycle of a typical vehicle. He added investing in battery charging infrastructure and electric vehicles would make the nation less vulnerable to disruptions and avoid increasing carbon emissions.

Scientists have urged drastic cuts to avoid the worst effects of climate change. A recent report from a United Nations panel of scientists warned children will likely face four times more climate extremes in the future if temperatures rise just a few tenths of a degree more over current warming levels.

Jonathan Patz, director of the Global Health Institute at UW-Madison, served as a lead author for the UN panel until recently.

"We need to cut our emissions almost in half within this decade to avoid catastrophic climate change, and so I think that to make any snap judgments on changing the direction of fossil fuel production because of the urgent war in Ukraine right now, I think that completely forgets the climate crisis," Patz said.

Patz and other health professionals in Wisconsin are stressing a shift to a clean energy economy. A 2020 analysis found such changes could avoid 1,900 deaths and save the state $21 billion each year.

"We have a golden opportunity to get to clean energy and save lives in the meantime," Patz said. "This call for more energy production and developing more oil and gas at home, I think it just couldn't be more misguided."