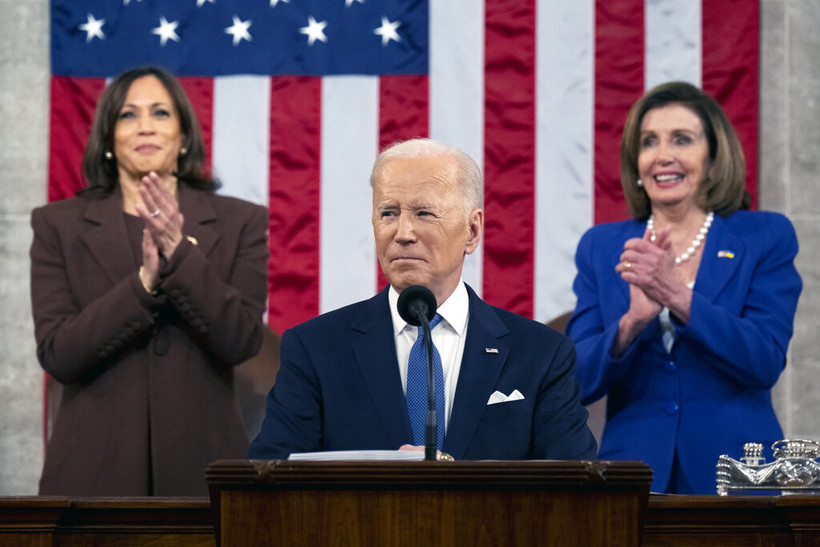 President Joe Biden delivers his State of the Union address to a joint session of Congress at the Capitol, Tuesday, March 1, 2022, in Washington. Saul Loeb, Pool via AP

President Joe Biden is visiting Superior Wednesday following his first State of the Union address to tout the $1 trillion bipartisan infrastructure law as he navigates challenges amid Russia's invasion of Ukraine, the COVID-19 pandemic and the nation's economic recovery.

Biden delivered his address to Congress as his administration has expanded sanctions against Russia, targeting the country's central bank. The president is facing criticism from Republican lawmakers who claim he has been weak in his response against Russia. During his address, the president said the U.S. is closing its airspace to all Russian flights and underscored the nation's importance as a world leader standing up to Russian President Vladimir Putin and his country's aggression.

"Putin's war was premeditated and unprovoked. He rejected efforts at diplomacy," Biden said. "He thought the West and NATO wouldn’t respond. And he thought he could divide us here at home. Putin was wrong. We were ready."

During his speech, Biden said that the U.S. is working with 30 nations to release 60 million barrels of oil from reserves worldwide as energy prices rise related to the Russian invasion. That includes 30 million barrels from the Strategic Petroleum Reserve.

Wisconsin lawmakers speak out ahead of president's address

Speaking ahead of the president's speech, U.S. Sen. Tammy Baldwin, D-Wis., said U.S., European Union and NATO leaders are united in their resolve to weaken Putin and his country's economy by targeting its financial system.

"This is a horrible situation relating to Putin's aggression and violence," Baldwin said. "He and his oligarch inner circle must feel pain, and the assets that are being frozen and seized are playing a role in that."

Baldwin said she was pleased with the administration's step to lessen the pain American families are feeling at the pump, but NPR reported prices didn't budge after a similar release in December. Even so, Baldwin added rising gas prices should hasten the increased use of renewable and clean energy alternatives to avoid reliance on foreign energy sources.

In an interview on WPR's "Central Time," U.S. Rep. Ron Kind, D-Wis., said he expects to see broad bipartisan support for Biden's request of $6.4 billion in military and humanitarian funding for Ukraine. Kind, who was in London last week working to coordinate sanctions with the U.K. government, said he credits Biden with pulling together a strong and united international response to Russia's invasion of its neigbhor.

"I think Vladimir Putin way overestimated the situation," Kind said. "He thought he had a divided Ukraine, a divided Europe, a divided NATO and a divided America to exploit. And just the opposite is occurring right now."

Conservative members of Wisconsin's congressional delegation have taken aim at Biden's response and rising energy prices that threaten to worsen soaring inflation, including U.S. Reps. Mike Gallagher, Bryan Steil and Tom Tiffany. Gallagher told Fox Business on Monday that the U.S. should have done more at the outset to assist Ukraine and more military assistance could be provided to "make this as costly as possible for Putin."

Rep. Gallagher on steps the US should take in Ukraine: “There is more we can do to provide military assistance in the form of stingers, javelins, sniper rifles, body armor, and mines to make this as costly as possible for Putin and turn this into a long term humiliation for him.” pic.twitter.com/3ZDFcDE7nk

Both Tiffany and Steil tweeted support to shore up the nation’s energy independence on Monday. Tiffany represents the 7th Congressional District that includes Superior, which is a hub for Canadian firm Enbridge's network of oil and gas pipelines.

Steil also pointed to the need for energy independence in a tweet.

The United States imports 595,000 barrels of Russian oil each day. We need to encourage energy independence instead of relying on Russia.

Data from the U.S. Energy Information administration shows oil imports from Russia increased an average of 154,000 barrels per day in the first 11 months of last year, according to Politifact. The fact-checking website said Russia is the second-largest foreign supplier of oil next to Canada following sanctions placed on Venezuela in 2019 that led to increased reliance on Russia’s supplies.

President to push other agenda items during Wisconsin visit

In his speech, Biden sought to revive parts of his social-spending Build Back Better bill to address challenges with child care and climate change by promoting savings for families and creating jobs through a clean energy transition.

Biden also highlighted the progress made in the last year ranging from vaccinating a majority of Americans to a historic investment in repairing ailing roads, bridges and water systems through the $1.2 trillion infrastructure law. The president announced the nation would begin fixing 65,000 miles of highway and 1,500 bridges this year.

As Biden touts those investments in Wisconsin on Wednesday, Baldwin said the funding will benefit the Twin Ports region and the state.

"Whether it's maybe an investment in the Blatnik Bridge that connects the Twin Ports of Superior and Duluth, or the extraordinary investments we’re making in clean water and cleaning up a very polluted area ... where the St. Louis River runs into Lake Superior," said Baldwin.

Biden and the first lady are expected to arrive at the Duluth International Airport and travel to speak at the University of Wisconsin-Superior's Yellowjacket Union on Wednesday afternoon.