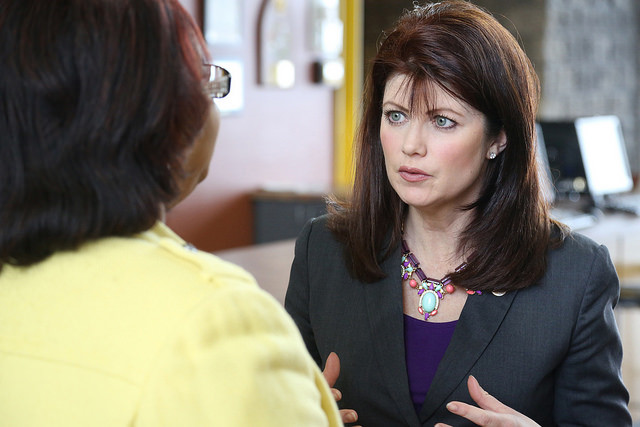 Lt. Gov. Rebecca Kleefisch was on hand to award one of the grants in Eau Claire. Photo: Gateway Technical College (CC-BY-NC-ND).

Funds Were Set Aside In State Budget To Spur ISPs To Add High-Speed Connections To More Areas In Wisconsin
By Rich Kremer
Share:

The Wisconsin Public Service Commission is awarding $500,000 in grants to help rural parts of the state get better Internet access.

The round of grants is part of more than $4 million set aside in the state budget to spur Internet providers to expand higher-speed coverage in rural areas. The grants are essentially matching funds for projects spearheaded by public and private entities like school districts, local governments, hospitals, and businesses.

Lt. Gov. Rebecca Kleefisch awarded one of the grants in Eau Claire. She said if the partners can show where broadband is needed and a plan to cover an area, the grant helps give it the final push.

“Then government kind of steps in to help out to go the one step further in order to make things happen,” said Kleefisch.

In 2013, the Department of Administration refused a $23 million federal grant for expanding broadband, saying there were too many strings attached. Also, Gov. Scott Walker forced the University of Wisconsin System to cut ties with a nonprofit Internet provider called WisNet in his budget.

“The more private-sector players we get on board in Wisconsin, the better off we are,” she said. “We don’t believe in simply government building everything.”

In Eau Claire, five organizations — including the county, two hospitals, and a regional consortium — won grants for $140,000 to run fiber optic lines to a new high-speed wireless transmitter that is expected to serve around 1,200 people.

When compared with other states, Wisconsin ranks 13th in average broadband speed, according to the Internet research firm Akamai.