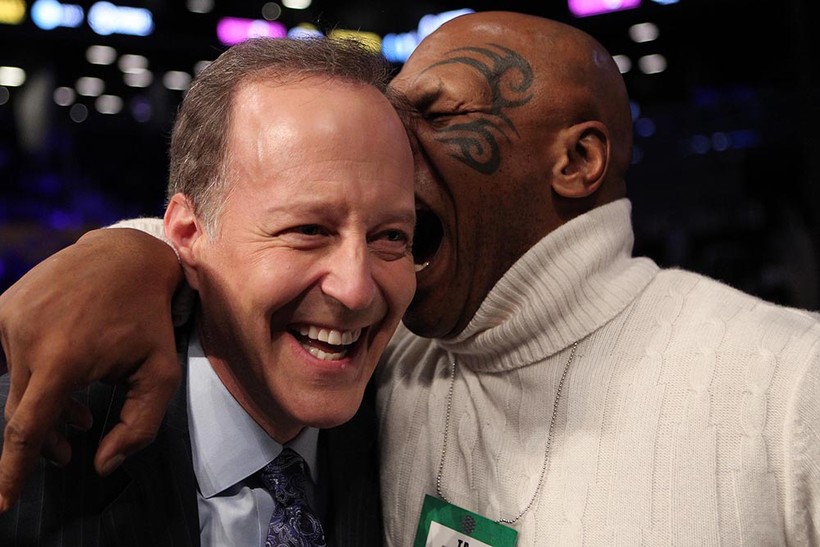 You can't cover so many historic moments in televised sports history without having a few stories to tell. Renowned sportscaster Jim Gray has his fair share — including one where he was the story — and relives them all in his memoir, "Talking To GOATs."

The acronym in the title standing for "greatest of all time" isn't hyperbole. Gray recounts his coverage and relationships with the most transcendent athletes of nearly every popular sport, including Muhammad Ali, Michael Jordan, Tiger Woods, Tom Brady, Hank Aaron and Michael Phelps.

When questioned which one of these interviewees is the GOAT of the media interview, Gray doesn't hesitate.

"It's got to be Muhammad Ali," Gray told WPR's "BETA." "He was just so much fun and so creative and he's beyond legendary and iconic. His name will withstand the test of time. What he stood for in the ring and achieved and what he stood for outside of the ring and the principles and everything that went on in his life. That's why his name's on top."

Not only has Gray interviewed the best athletes in sports, but he ha's also been on the sidelines, dugouts and ringsides for some of the most infamous moments in sports history.

Take for instance the night of Saturday, June 28, 1997. Gray was covering what was then being billed as "The Sound and the Fury" — a rematch of boxer Mike Tyson and Evander Holyfield's heavyweight title fight from the previous fall. After that night, the fight would go down in lore as "The Bite Fight."

"It was a much-anticipated rematch because Holyfield had unexpectedly — at least to the public, not to him — beaten Tyson in that fight," Gray recalls. "There was a lot of anticipation for it. It was a worldwide huge spectacle. That's what Mike Tyson brought to the ring. It was a train wreck that everybody had to see. But nobody, nobody had ever suggested or would have even thought that he would bite off another man's ear lobe."

In the midst of the third round — as a retaliation for Holyfield's head-butting tactics — Tyson bit his opponent's ear. The fight was paused and Tyson was docked 2 points and warned that if it happened again, he would be disqualified. The fight didn't last much longer before Tyson chomped on Holyfield's ear again. This time, referee Mills Lane immediately ended the bout.

This caused complete pandemonium. Gray jumped into the ring to interview Lane about stopping the fight. Then, he rushed back to the locker room to snag the first post-fight interview with Tyson.

"The police got in the ring and it was chaos and they finally got (Tyson) out of the ring," Gray said. "So he was extremely agitated still, you know, he's a fighter and he still had all this pent-up energy and wanted to fight."

Still, Gray managed a frank and honest interview with the heated Tyson. Gray, who has a long relationship with the fighter, always respected that moment and argues that no one in sports is as honest and open in an interview than Tyson.

This wouldn't be the last bizarre sports incident Gray was front and center for. He was working as an NBA sideline reporter at the Palace in Auburn Hills, Michigan on Nov. 19, 2004, for a regular season game between the Indiana Pacers and the Detroit Pistons. This game would later be dubbed "The Malice at the Palace."

"The game was basically over. The Pacers were going to win the game. There was a little skirmish out on the court, a hard foul, bit of an altercation that transpired between Ben Wallace and Ron Artest," Gray remembered.

The Pacers' Artest laid down — almost Zen-like — on the scorer's table right in front of Gray. It was at that moment that a fan launched their drink on Artest.

"That set off the volatility," according to Gray.

Artest would sprint into the stands and accost the supposed violator, leading to several players entering the seats and a severe black eye for the NBA.

"He had a natural reaction. Really, it was a human reaction to want to respond to that. The problem is you can't do that," says Gray. "You can't be an NBA player in the stands and beat up the very customers who are paying for your game. And then if you do, if you make that decision, you better hit the right guy."

Gray also opened up about the time he found himself in the sports spotlight when he aggressively interviewed MLB pariah Pete Rose. Rose was famously banned from baseball and its Hall of Fame for gambling on games. However, he was able to take part in the "All-Century" honors due to the fact that it was being run by Mastercard as a fan event during the 1999 World Series.

"It was actually his hall of fame moment and he got a rousing ovation. The significance of it was he hadn't been on the field for 10 years since signing away his own banishment from the game of baseball for betting on baseball," said Gray.

Unknown to Gray was the magnitude of the pageantry of the moment TV audiences were experiencing. He was on the field and said it felt more subdued from that vantage point. Then, NBC cut to Gray's interview with Rose where he pressed the freshly honored player about his inability to fess up to his gambling.

"There was an abrupt change of tone and timing from the beautiful symbols and warm feeling that everybody is having about their childhood," said Gray.

"It became very controversial. There was a tremendous amount of blowback and tumult and agita. For me, the reverberations of that interview struck a chord with a number of fans," he continued.

Gray admits that he went back and watched a replay of the telecast to see the interview in context. After watching, Gray would work with NBC President Dick Ebersol on making a televised apology — not for his questions or editorial choices, but for misreading the mood of the audience.

"You have to ask questions to ascertain information. But it does cause you to revisit that you're having the same experience everybody else is because it would have changed if I'd have been watching television," said Gray.

It's because of his steadfast commitment to getting answers that Gray has made a lifelong career out of reporting and breaking epochal sports moments. It's why three-time Academy award-winner and Los Angeles Laker court-side fixture, Jack Nicholson — who Gray calls a "Lakeraholic" — befriended the journalist and nicknamed him "Scratchy" for his insistent digging for answers.

"We just became very well acquainted throughout the course of my years broadcasting all of the NBA games on NBC and CBS and then ESPN and ABC. I just got to know him well over the years. And so, one night he called me after I'd done some interviews and he said, 'Got a little scratchy with those people tonight," recalled Gray. "It just kind of stuck. I like having a nickname from Jack Nicholson. So, it's taken on a life of its own over the course of time."

Talking to GOATs: The Moments You Remember and the Stories You Never Heard (Memoirs)

Talking to GOATs: The Moments You Remember and the Stories You Never Heard