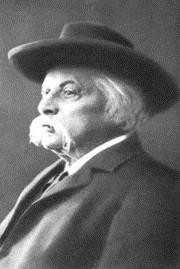 In memoirs he began in 1910 and never finished, composer Karl Goldmark looked back six decades to his early experiences as a struggling violinist. After a brief inglorious career as a draftee in a war between Austria and Hungary, the eighteen-year-old musician settled in the town of Ödenburg. His playing wasn’t always appreciated.

On October 1, 1848, I joined the orchestra of the Ödenburg Theater as one of the first violins at a monthly salary of eight florins. In order to have the opportunity to play in public, I needed a dress coat. I paid three florins a month for one and another three florins went toward renting a room. That left me two florins to pay all other expenses. I went hungry and cold, but I had a dress coat, and soon enough it made its debut.

The ballet master invited me to play a concerto at his benefit, and I did–Beriot’s Concerto in D. It won me a good deal of prestige among my colleagues. But it put the concertmaster (we had just two first violins total) beside whom I sat, in a bad frame of mind, and he got even. At a rehearsal of the opera Zampa, at the singer’s request, a difficult violin part was to be transposed one third. My colleague busied himself with his strings and left me to play the part alone. It was my first engagement. I had never played that opera and I made a hash of it.

But it was clear that the breakdown was the product of spite shown a young inexperienced player and the mishap didn’t do any further harm.

At the end of the season, the theater company moved to another town, leaving Goldmark and just three other string players to provide overtures and music between acts in the form of string  quartets.

“When the curtain rose, I had to stop,” Goldmark recalled, “even if we were in the middle of a bar. All in all, the pleasure was limited.”