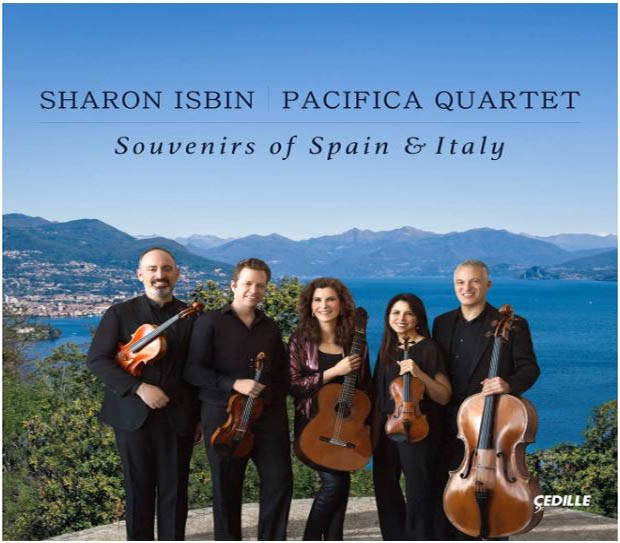 'Souvenirs Of Spain And Italy'

World-renowned guitarist and multiple Grammy winner Sharon Isbin has joined forces with the Pacifica Quartet for a new recording, called "Souvenirs Of Spain And Italy," featuring music by four Spanish and Italian composers.

There are some interesting interconnections: composer Castelnuovo-Tedesco was born in Italy, but was of Spanish ancestry and composed a number of works for the legendary Spanish guitarist Andrés Segovia.

Italian composer Luigi Boccherini spent much of his career working at court in Spain, where he wrote the famous "Fandango" Guitar Quintet featured on this recording, complete with castanets and tambourine.

Vivaldi was quintessentially Italian, but a Spaniard provided the arrangement here of the "Concerto in D major (RV 93)." Emilio Pujol studied with Francisco Tárrega around the turn of the last century and became an important guitar teacher and musicologist himself.

The fourth composer, Joaquín Turina, was born in Spain, and his work, "La Oración del Torero" ("The Bullfighter's Prayer") was originally written for lute quartet. The piece captures the atmosphere in the chapel where a bullfighter prays just before facing the animal in the ring.

There's a gorgeous, rich tone from all of the instrumentalists throughout the recording. That's coupled with a certain transparency in the sound that allows for a deep delve into each piece.

As usual, Isbin's performances are glorious and illuminating, and this is a terrific partnership with the Pacifica Quartet, which brings a lovely lightness and effervescence to these pieces.