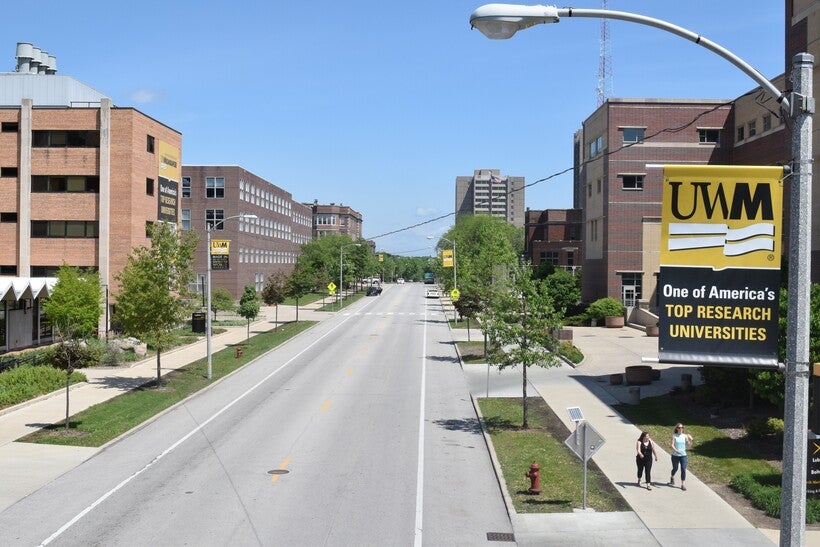 File photo of the University of Wisconsin-Milwaukee campus. Gretchen Brown/WPR

Four colleges and universities in southeastern Wisconsin are partnering in a first-of-its-kind effort to reduce enrollment, retention and graduation disparities between students of color and their white counterparts.

UW-Milwaukee, UW-Parkside, Carthage College and Milwaukee Area Technical College announced Wednesday that they have partnered with education consulting group EAB to eliminate graduation equity gaps at their institutions by 2030.

The collaboration, called Moon Shot for Equity, will use software to track student progress and identify opportunities for advisors, instructors and financial aid officers to offer support to students deemed at risk of failing classes or dropping out. The equity initiative is expected to cost the campuses $8 million over the next five years.

Some of the software, developed by EAB, has already been used at Georgia State University.

Wisconsin's overall graduation rate across higher education has been improving slightly, according to data released in March by the National Student Clearinghouse Research Center. It showed that 68 percent of students who enrolled in Wisconsin colleges and universities in 2013 graduated within six years, up slightly from the 62 percent graduation rate among those who enrolled in 2009.

But six-year graduation rates at public colleges and universities varied widely when broken down by race, according to the data. Just more than 40 percent of Black students graduated within the six-year window. For white students, it was more than 76 percent. For Hispanic students, the graduation rate was 61 percent, while 66 percent of Asian students graduated in six years.

Latoya White, EAB's senior direction director, said her organization will provide the four campuses with discounted prices for data-tracking software it has developed that uses multiple metrics to determine if students are falling behind.

"What this does is break down those silos across campus so that advisors, tutors, faculty, even financial aid can collaborate together in a unified system," White said. "And the students themselves (work) with those support structures in a shared workspace. Through this, they'll be able to have all of their activities, initiatives, schedules, all in one place, recorded, tracked and assessed."

The University of Wisconsin System has already contracted with EAB for some of its software. In March 2019, former UW System president Ray Cross announced a $4 million contract with EAB for similar data-tracking software called Navigate Student Success Collaborative, which has also been used at Georgia State University.

UW-Milwaukee Chancellor Mark Mone said that as one of the first steps in the initiative, a group of 400 staff members from participating campuses will take equity skills training.

Mone said he's eager to eliminate graduation rate discrepancies between students coming from low- and high-income families, as well as those between students of color and their white counterparts.

"We want them to graduate at the same rate as all our students by 2030," said Mone. "That's an ambitious goal, but we think we can do it."

UW-Parkside Chancellor Debbie Ford said Wednesday that her campus had previously partnered with 17 others, including Milwaukee Area Technical College, on an initiative called the Higher Education Regional Alliance dedicated to closing achievement gaps between students and helping grow the state's workforce. She said the Moon Shot initiative would strengthen those efforts, along with UW-Parkside's goal of growing its graduation rate 50 percent by 2025.