This illustration shows the progression of WPT's Rodney Lambright II's sketches for the animated comic, "Something About a Flower: The Fortune We Share."

'Something About A Flower' Gets Animation Treatment

With "Calvin and Hobbes," it was the injection of imagination. In "The Boondocks," he loved the characters and he could relate to them.

Lambright spent countless hours drawing and sketching during his childhood in Illinois and Wisconsin, and in college at the University of Wisconsin-Madison.

Lambright turned his fascination into a career and is now an animator, TV artist, and producer with Wisconsin Public Television. His biweekly comic, "Something About a Flower," recently underwent the animation treatment and is debuting at 7:30 p.m. Thursday on Wisconsin Life.

WPR’s Maureen McCollum recently spoke with Lambright about the animated short, "Something About a Flower: The Fortune We Share." This interview has been edited for brevity and clarity.

Maureen McCollum: You created the cartoon "Something About a Flower." For people who haven't seen it, can you explain the premise?

Rodney Lambright II: For sure. "Something About a Flower" is a story focused around a little girl named Rose, her family, and living with her single dad (Greg). (It's about) her adventures every day with her grandparents as well, because her grandparents actually are stepping in as that second parent. In a way they’re providing her with a lot of things a single parent has to struggle with.

I think that the comic is mainly focused around the fact that Rose is trying to teach her family how to love and imagine again. That's so important because as we get older, life becomes more serious and we tend to forget about the magic of being able to enjoy the things around us, even if it's the littlest things.

The character, Rose, sort of comes from my own niece. She's 3 now. She's my first niece, so I've never had that relationship that close with anybody yet. It was inspiring to me when she was born. Writing a comic about seeing her play and have a good time just made me think about how happy life is. Sometimes we can just lose that in everyday life.

MM: And you probably end up reflecting on your own childhood in those moments.

RL: Absolutely. It's just really funny how a child can take something so simple and stretch it so far. In a way I, as an artist, never want to lose that. You're finding the joy in the simplest things in life and that's just amazing at the end of the day.

MM: Have you always loved comics? 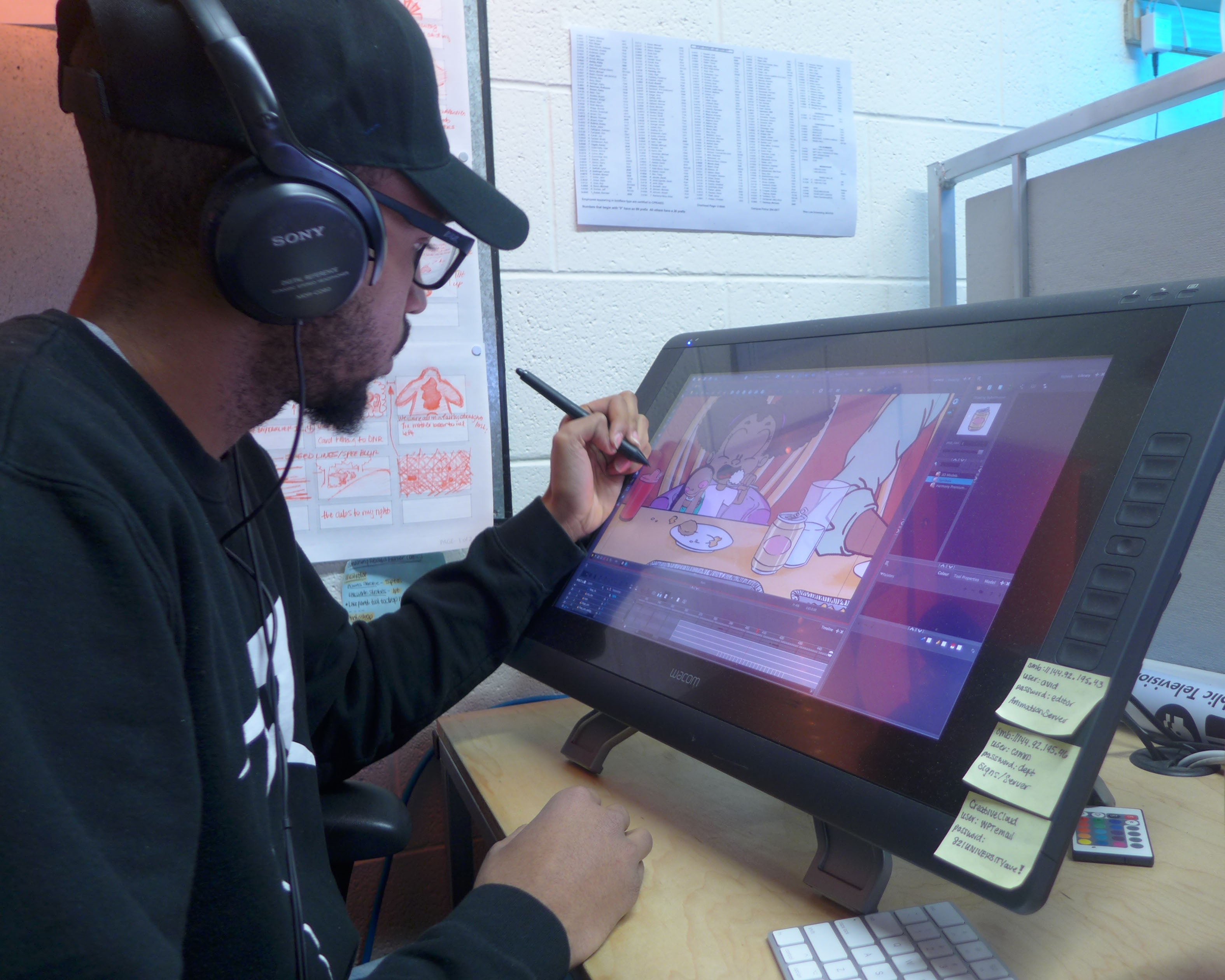 Rodney Lambright II sketching in his office and working on "Something About A Flower." Maureen McCollum/WPR

RL: Yes, I actually have. I've been drawing for a really long time, but I didn't always take it very seriously. I didn't really take art seriously until I was in high school. I would draw sketches and drawings that I thought were pretty cool, but then I'd throw them away. Then other people would be like, "Why are you throwing them away?" I'd just give them away. I thought they were taking up space for a really long time.

MM: Were you always a creative kid or was there something that inspired you to start sketching in high school?

RL: I'd say I was always pretty creative. When I started going to high school (Case High School in Racine) and college, I began to hone in on what it meant to be a creator. Early on, I don't think I was reading into how much creativity goes into projects and story lines, and why people are drawing things, why people are creating certain things. So, I didn't really grasp that early on. I came into that aspect a little later.

When I was drawing a picture or something, I always had to tell a story. I couldn't draw a picture without telling some narrative. I think that's how I got to the point to where I wanted to do animation and storytelling in that way.

MM: When I first started reading "Something About a Flower," Tina (the doll) reminded me a lot of Hobbes from "Calvin and Hobbes." They're inanimate objects, but when you're a kid these objects mean so much to you and have a life of their own.

RL: Absolutely. I would say that he was an influence. For me, Tina was a character that internalized all the things Rose is thinking about, but it doesn't sound like it would come from Rose at the time. It doesn't mean a child isn't thinking about those things, it's just in a more innocent way.

Tina's actually one of my favorite characters because she isn't afraid to say anything. That's why I really enjoy her character the most. I think of her as the best friend that I always wanted to have. If I'm not doing what I'm supposed to do, they can step in and say the things that may hurt my feelings or might make me upset, but at the same time, it's coming from a loving place. 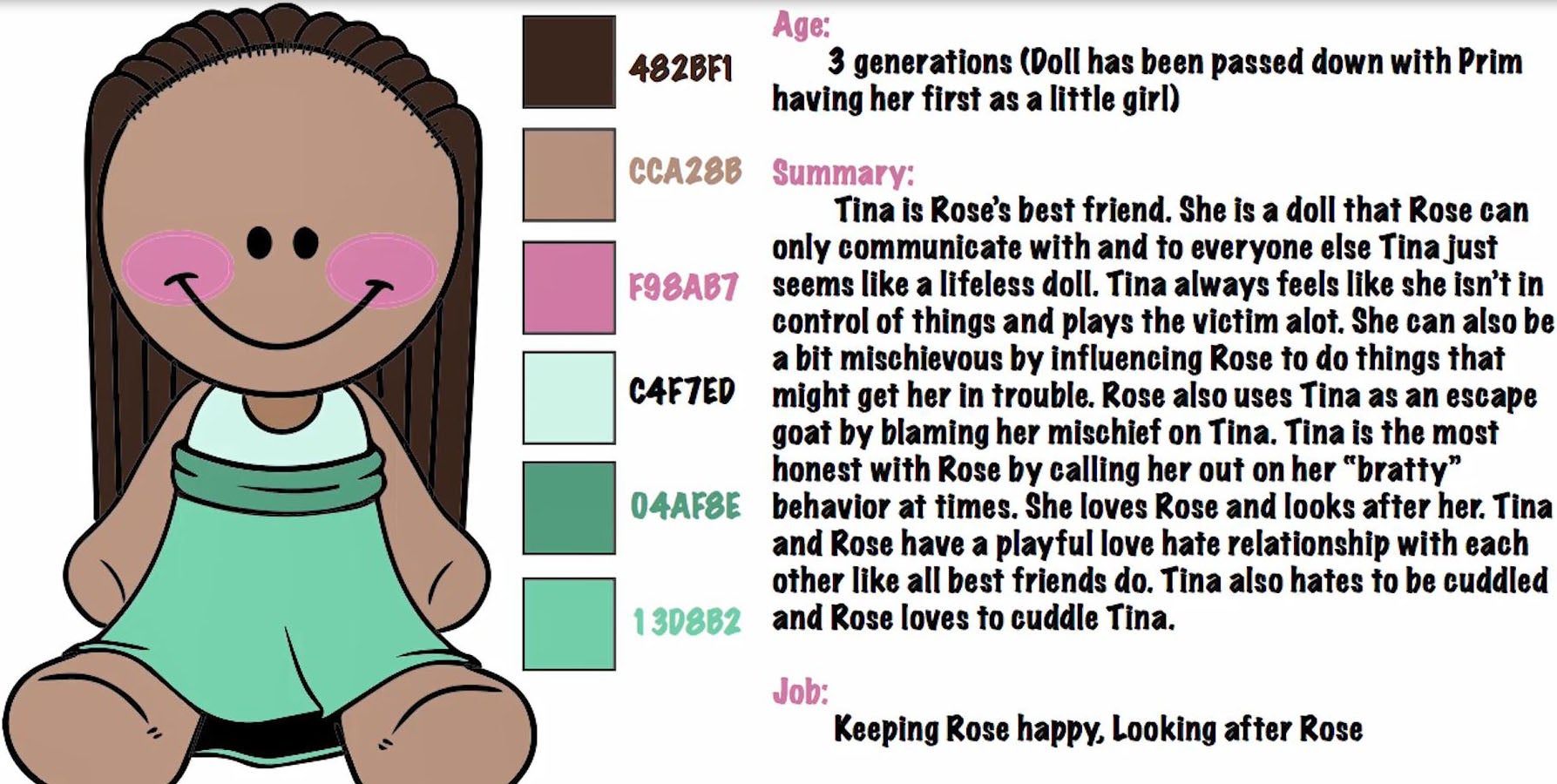 MM: One week in your comic you may portray a funny, situational moment. The next week it may be more serious and unveil a bigger story about the family, like in "Mother’s Day," (where we find out Rose's mom, Rosalina, has died). Other comics showcase your poetry. Can you talk about your writing process and how you make the story unfold?

RL:  Comics are so great in the aspect that you can express storylines in so many different ways.

There is a specific storyline that's behind the entire series. There's one called, "Tea Party Therapy," where it's touching on the fact that Greg is a single father. How is he coping with being a single father? I think that those aspects of the story are so important because we don't talk about them.

Also, I’m trying to push different views of representation. A lot times in the African-American community it's seen that a lot of single parents are mothers. Whether those numbers are real, I don't know off the top of my head, but that was my way of changing the narrative and showing that there are plenty of fathers out there who are single fathers and doing amazing things.

It's kind of balancing this innocence story with the harsh realities of life. Without that balance, if everything is just OK or perfect all the time, it doesn't feel real. Everything isn't OK. But in those difficult times, how can you find the positives?

That's where Rose comes in a lot of times. When things are sad or negative, Rose kind of reels the family back in and says, "It's not over. Everything is going to be OK. We're going to move forward. Just don't forget to love where you are and the position you're in."

MM: So now you're animating "Something About a Flower." It's going from a biweekly comic to an actual animation, what's that experience like?

RL: It's super exciting. It is one of the most amazing projects that I've ever gotten to work on so far. Credit goes to the wonderful people I've been able to work with, starting with the voice actors. It's just really amazing how you can explain an idea of what these characters are, read the comics, then the voice actors can put a voice behind them.

RL:  Absolutely. So he plays two characters. He fluctuates between (grandfather) Larry and a guest star character, Joe, in the animation.

The cool part about Larry is that he has a very limited amount of lines. But that character is actually inspired by my grandfather, who passed away a couple of years ago. I know how he acts and I know that personality. Otis, when he put his voice behind that character, it made me think of my grandpa instantly. It was so funny because Otis understood the character and it was really inspiring to hear him talk about the characters and how it resonates with his own family.

I think at the core of things in the animation, I don't want to fake that part, because the voices are the most important part of creating the feel and vibe. So, I think that was really exciting for me, especially that character. He felt so real to me.

Like I said, he only had one or two lines, but when he said it, you have a total understanding of Larry’s personality from one line.

MM: What do you want viewers to take away from the comic and animated piece?

RL: One of the biggest things I want viewers to take away from it is an African-American family is normal. Their representation on television should be normal. It shouldn't feel like "minority bonus" or something adding to content. I think that their stories are a lot of times untold.

I had the opportunity to share some posters and bookmarks at an event called "Get Up and Go!" that WPT does. I had families coming up to me being excited, minorities ranging from being black to everything else saying they were so excited to see someone that looked like them. That was parents and children. I thought that was amazing for me because a part of it was creating a story line that my niece could sit down and say, "That character looks like me." That was extremely important for me.

And also, like I was saying earlier, trying to break some stereotypes and combining it with teaching and learning through narrative-scapes or real-life situations. Being able to see things from a different perspective. For example, usually in cartoons you have the family that has a mother and a father. But all those people in the audience who don't have a mother and father, how do they watch those shows? Is it triggering because they don't know what that feels like? Being able to have that different point of view on things can resonate with a different group of people and that's what I was trying to go for.

Thunderstorms, Hail In The Forecast For Wisconsin
CDC: Mask Up In Some Situations Even If Fully Vaccinated Against COVID-19
Wausau Demolished Its Mall. Could What Comes Next Be A New Model For Small-City Downtowns?
The Philippines Wins Its First Olympic Gold After Nearly 100 Years Of Trying
Department Of Health Services: 'We're On The Path To A 4th Surge'