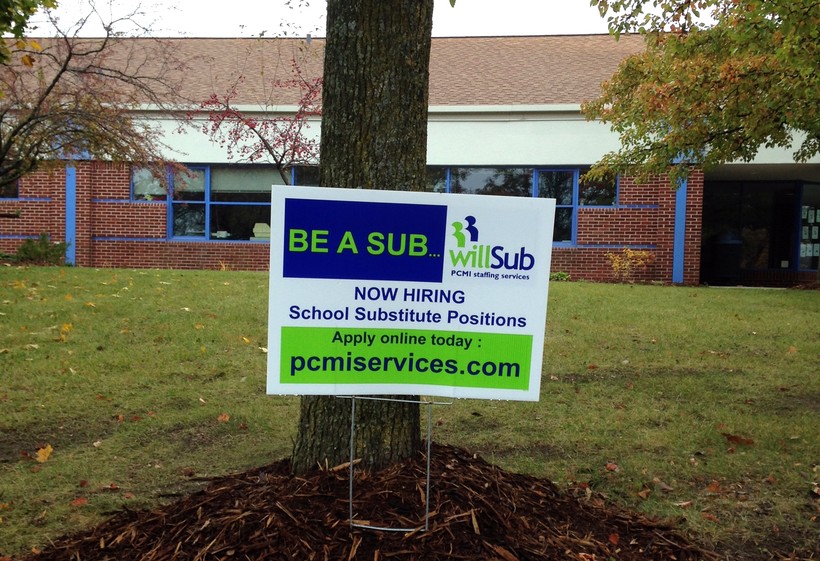 In a photo from Oct. 23, 2015, a request for substitute teachers is posted outside Murphy Elementary School in Haslett, Mich. David Eggert/AP Photo

Decline In Teaching Applicants Has Schools Asking Kids To Consider Teaching As A Career
By John Davis
Share:

Some Wisconsin schools are finding creative ways to get around a shortage of applicants for teaching and other school staff positions.

While most schools have worked for years to expose students to career options, they’ve often overlooked teaching or other professions that they hire, such as school counselors.

But with the number of applicants for school positions dwindling across the state, some schools are starting to promote teaching as a career option.

"At our high school we’ve got a student-teaching club. We’re encouraging individuals who are interested in teaching to get together early on, have some formative experiences in the classroom, to work with a teacher as a mentor and to learn more about the profession while they‘re still in high school," said Aaron Engel, district administrator for the Gale-Ettrick-Trempeauleau School District. "We do a great job in education of exposing kids to every career that‘s out there and sometimes we forget about the one that’s right there, which is education."

The School District of La Crosse has worked to get a positive message to the public about the impact education has on students' lives.

"Social media has become very important. In our district, we are spending a lot of time trying to encourage our teachers, and then we have a communications director trying to get positive stories out there about the district and going directly out there through various means. That’s something we never would’ve thought about 25 years ago," said Mark White, La Crosse schools' human resources director.

He said universities the La Crosse school district often uses to fill teaching positions report they have lost about one-third of students in teacher preparation programs in the last 10 years.

"It is something relatively new for education. Everything is affected, from the number of subs we have to fill in our classrooms on given days, to the number of candidates we have," White said. "It is incumbent on us to do that encouraging, to let people know it is a great career. To be able to change the lives of children and affect the future. I don’t know that there’s anything that could be more exciting that someone could be doing for a profession and a way to make a difference in this world."

"There’s a handful of positions that are really hard to fill. Whether they’re special education positions at any level, or maybe science or technical education. Those teachers have greater opportunities now because of that low number of individuals in the workforce," Engel said. "Just the low number of teachers entering into the workforce and baby boomers retiring has created an opportunity for some low-density teaching positions to move around a little more frequently."

White and Engel both cite Act 10, legislation approved in the state in 2011, that eliminated collective bargaining rights from public labor unions. They said it led to more teachers retiring and fewer people pursuing careers in the education. But they also believe the atmosphere in education has become more positive in the past couple of years.

Both the La Crosse and GET school districts had a successful summer filling the majority of vacant positions. La Crosse hired 50 new teachers, which is average. GET replaced about 15 teaching positions, slightly higher than normal.