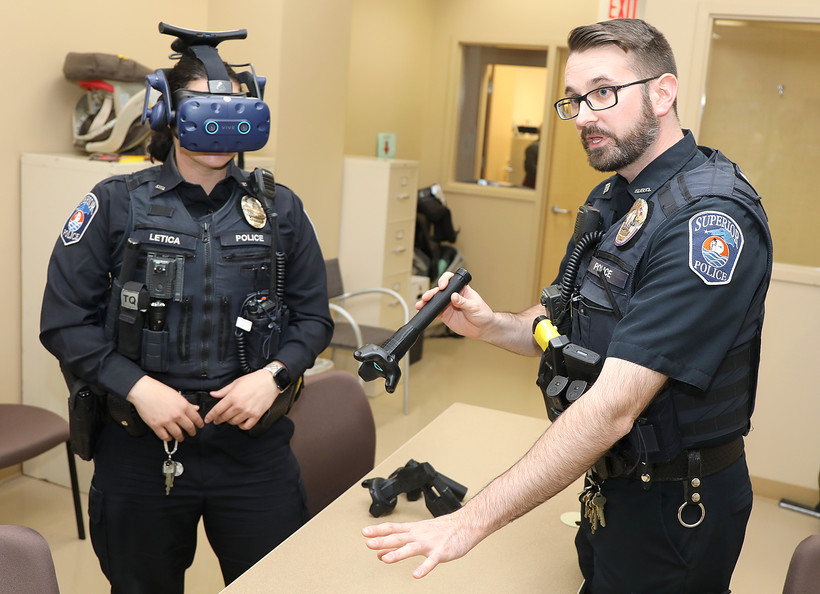 Public Information Officer Bradley Jago, right, talks about the new virtual reality training system at the Superior Police Department as he holds the VR flashlight, which will turn on while training as new officer Brittany Letica wears the headset for the first time Thursday, May 27, 2021, at Superior Police Departmen headquarters in Superior. Jed Carlson/Superior Telegram

Some Wisconsin law enforcement agencies are using virtual reality simulations to help officers hone their skills to deescalate crisis situations as police training has come under continued scrutiny surrounding the use of force.

Police departments in Superior and Racine, as well as the Racine County Sheriff’s Office, are among agencies across the state using VR to train officers.

In Superior, police have recently started using a VR training simulator offered by Dallas-based business Survivr. Officers use a VR headset that displays 3D scans and screenshots of real-world objects as part of training simulations that include replicas of weapons or items officers carry in the field. Officers can run through scenarios that range from responding to a person experiencing a mental health crisis to a mass shooting.

"We try to gear these training scenarios so that if officers use effective verbalization and communication and deescalation, that they can resolve those situations without the use of force," said Alexander. "We try to build those positive outcomes as much as possible."

Law enforcement training drew scrutiny during the trial of former Minneapolis police officer Derek Chauvin, who was convicted of murdering George Floyd and sentenced to 22 and a half years in prison. A recent city audit of the Minneapolis Police Department’s system for training officers found trainers and new officers sometimes operated with little oversight, according to the Minneapolis Star Tribune.

In Wisconsin, a bipartisan task force proposed changes to policing this spring to address police oversight, officer training, and use of force. Gov. Tony Evers recently signed bills into law that would bar police chokeholds with limited exceptions, require police to report incidents when force is used, and require police to publish use-of-force policies. The state Senate has also approved a bill that would set a uniform use-of-force policy in Wisconsin.

With the addition of VR training, Alexander expects each of the department’s roughly 50 officers will go through dozens more training scenarios than they would be able to complete now.

"Now that we have the equipment here, we have been training officers on duty, which is a cost savings because almost all of our scenario-based training before occurred at overtime where the officer came in on their days off and did it," said Alexander. "Now, because of the ease of setup of this equipment, the realism of the scenarios, we can pull officers who are on duty off the street temporarily, run them through a couple scenarios in 15-20 minutes, and then they can go back and work their shifts."

Alexander said the program, which includes automatic responses from characters, allows trainers to take control of individuals within scenarios to test officers response.

Wisconsin requires sworn officers to receive at least 24 hours of recertification training each year. Superior’s police chief said he strives to set the bar higher, including by offering fair and impartial policing trainings for all officers.

"One of our goals of this training was to put them in difficult/stressful situations so that when they are asked to do so in real life, they have already gone through several of these options in a stress-induced reality based scenario and given their brain the opportunity to process this in a safe place," wrote Sell in an email.

Like Survivr, the system uses VR headsets where officers run through a range of scenarios that include responding to a person who has suicidal ideations, an individual who is autistic, and a person experiencing a schizophrenic episode.

"We can take these difficult situations that at times go wrong. We see it throughout the country," said Evans. "But, (the training allows) our officers to get the reps and the practice before they're actually engaged with a real person."

He said the training is beneficial for law enforcement because it allows them to transition between the officer’s perspective and the perspective of the individuals they are interacting with.

"The ability for officers to see a different perspective can't be undersold," said Evans. "That is extraordinarily valuable."

A 2018 study by researchers at Stanford University found a VR scenario on what it would be like for a person to lose their home helped participants develop longer-lasting compassion for those who are homeless. Other researchers have warned using VR to help people empathize with others may not achieve the desired effect, depending on a person's perception of whether an individual's situation is really that bad.

Officers who run through each scenario are presented with a variety of options of what to say or do during their interactions and can repeat encounters when they make a mistake to correct their decisions.

While most scenarios focus on deescalation, Evans noted trainings are being made available that address officers’ duty to intervene after three Minneapolis police officers stood by and watched Floyd be murdered last spring.

The technology is not intended to replace other forms of training, but officers say it can be a useful tool with proper oversight and feedback for those who receive training. The law enforcement agencies hope the trainings will develop better skills and responses among officers that will become ingrained over time.