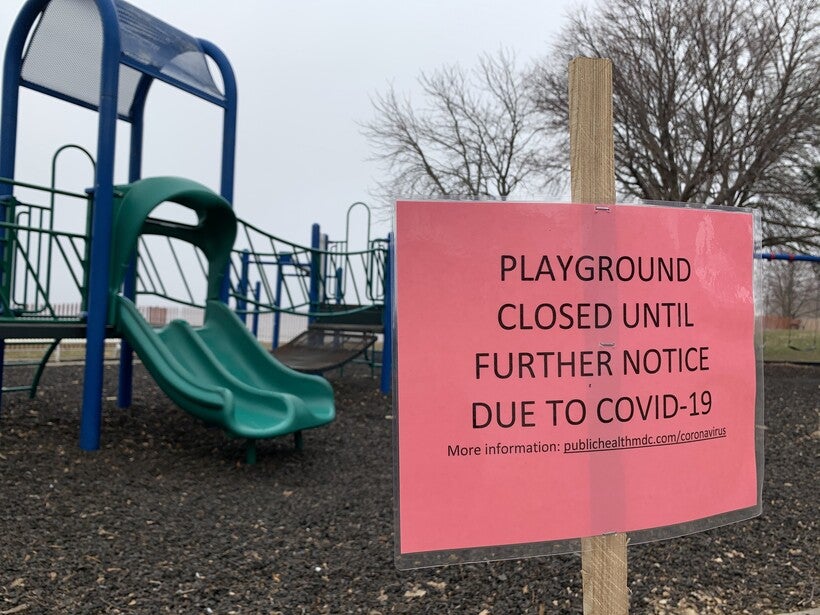 Playgrounds across the state, including this one at James Madison Park in Madison, closed March 25, 2020, to slow the spread of COVID-19. Bridgit Bowden/WPR

Some county sheriffs and police chiefs across the state believe Gov. Tony Evers has "overreached" in extending the the state's "Safer at Home" order and say they won’t enforce it. Instead, they believe county health officials should have to enforce the order, not law enforcement.

Last week after Evers announced Thursday that the stay-at-home order would be extended to May 26 to help prevent the spread of COVID-19, Racine County Sheriff Christopher Schmaling released a lengthy statement saying state law does not have the power to "supersede or suspend the Constitutional rights of American citizens."

"I took an oath to uphold the constitutional rights of our citizens, and I can not in good faith participate in the destruction of Racine County businesses or interfere in the freedoms granted to all of us by our Constitution," Schmaling said. "We will leave the enforcement of public health orders to the health department experts. It is important that we stay focused on our obligations and responsibilities to those areas of the law that we are charged with enforcing."

It is illegal for a law enforcement agency to not enforce a state order like stay-at-home, said Paul Nolette, chair of Marquette University’s political science department.

"I know that the sheriffs have brought up some fairly vague, constitutional rhetoric about rights and such, however one key thing to remember about the constitution, both the U.S. and the state constitution, is it provides states a great deal of power to do things in the best interest of the state’s health and welfare of the state’s residents."

As part of the order, Wisconsinites are only allowed to leave their homes to do essential things, like going to the doctor, the pharmacy or the grocery store. People are allowed to go outside to exercise, but they are required to practice social distancing and keep 6 feet between themselves and others.

Although people don't need permission to leave their homes under the governor’s order, law enforcement agencies do have authority to enforce the order and issue citations.

Dodge County Sheriff Dale Schmidt posted a message on Facebook over the weekend regarding the order. He said he has been concerned with the constitutionality of the order from the beginning, when it went into effect in March 25.

Because of that, Schmidt has been directing his staff to let him know if businesses are not in compliance and to contact him before forcibly closing a business or making an arrest.

"Fortunately, I have received zero phone calls from my deputies needing to take enforcement action," Schmidt wrote in the post. "There are currently several lawsuits that are being developed that likely will be filed this week to challenge the extension of the governor’s order. It is my hope that these challenges will lead Governor Evers to realize that he must revise what has been put out and it needs to be more in line with the President’s common sense phased approach to reopening the economy."

On Monday, Evers provided more information about the extension of the stay-at-home order. The state Department of Health Services will decide when the state is ready to reopen and do so in phases. The state will follow some of the same criteria suggested by the White House, Evers said.

Schmidt told WPR on Monday he feels a little better that Evers has provided some clarity.

"That is exactly what we were looking for, a plan for how we are going to proceed from here, so I’m thankful that is what the governor put out," Schmidt said.

Jason Bauer, the police of chief of the Colby-Abbotsford Police Department, sent a letter to Evers on department letterhead that he later posted on his Facebook page comparing COVID-19 to the devil. He said he feared neither:

"I believe COVID-19 has some politicians scared, resulting in bad decisions. Government cannot protect everyone from COVID-19. Although exaggerated at times, I believe our government has done a good job of providing the dangers of being infected with COVID-19. It is time for our residents to choose how they want to protect themselves. For those who are afraid, keep practicing social distancing. For those of us not afraid of the Devil, life should return to some sort of normalcy."

Bauer did not return calls from WPR. In an interview with the Wausau Daily Herald, he said he would comply with the governor’s stay-at-home order.

During a press conference Monday, Evers was asked about law enforcement officials who were questioning the order's extension.

He said that the idea there is a mass group of people that needs to be arrested for breaking the order "is just not Wisconsin."

"Most people get it, they might not like it, but they are taking this idea seriously, they see this saves lives," Evers said. "The bottom line is we are working very well with sheriff’s departments across the state."