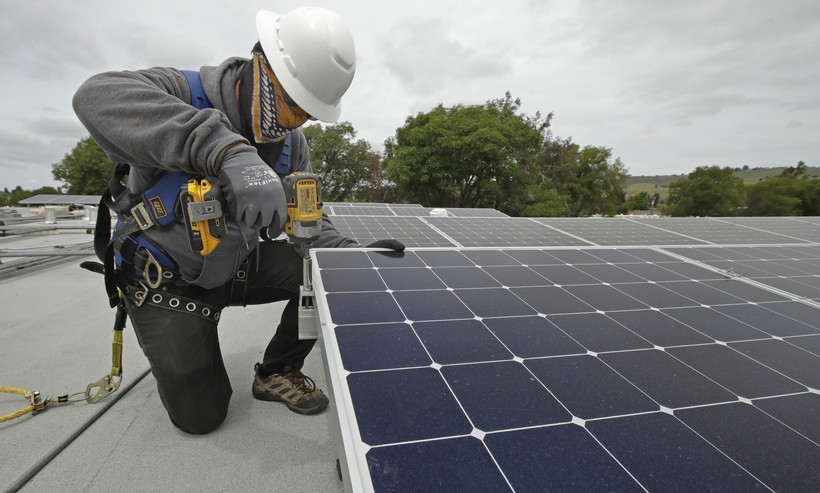 Solar advocates hope a recent decision by Wisconsin utility regulators will lead to more proposals to use a financing tool that makes it more affordable for homeowners, schools and business to install rooftop solar.

This month, the Public Service Commission voted 2-1 to approve Vote Solar’s request to allow third-party financing to install solar on the home of a Stevens Point family. Under the agreement, North Wind Renewable Energy Cooperative will lease the system to the family who will use the electricity. The family's traditional utility company is Wisconsin Public Service. Advocates say the financing method is like leasing a vehicle that helps customers afford the upfront costs of installations.

Vote Solar filed a petition in late May with utility regulators. The groups wanted regulators to clarify the financing tool is legal after multiple court challenges and lawmakers have left the matter unsettled.

Utilities have argued that selling power to the public makes solar installers a public utility, and they should be treated as such. But solar advocates argue projects like the Stevens Point installation only serve one family or customer. The commission agreed the project doesn’t sell power to the public.

"What is likely to happen is that there will be more proposals of that nature coming forward, and it's up to the utility to decide to accept it or take it to the commission," said Michael Vickerman, policy director for RENEW Wisconsin.

Vickerman and other solar advocates, including Vote Solar, say the commission’s decision is an important step, but regulators did not grant approval of all such financing arrangements. They say it’s vital to make third-party financing available for all in Wisconsin.

"We’re thrilled to see the commission make the right choice for this family, and hope the state will continue to build on this momentum by affirming that third-party financing is an option for all Wisconsinites," Will Kenworthy, Vote Solar’s Midwest Regional Director, said in a statement after the ruling.

The law defines a public utility as any entity that provides "heat, light, water or power either directly or indirectly to or for the public."

Utilities owned by Milwaukee-based WEC Energy Group, including WPS and We Energies, say they’re disappointed in the ruling. They argue unregulated rooftop solar developers are pushing the issue to skirt regulation and the Legislature.

"These types of financing arrangements, we believe, are illegal under state law, and also they harm our customers by shifting additional costs from the people who want and can afford to own solar to the people who don't want and can't afford solar," said Brendan Conway, WEC Energy spokesperson.

Conway said customers who are getting power from solar systems don’t need to buy as much electricity from the utility. As they require less power, he said they’re paying less of the cost to distribute electricity on its system. The Wisconsin Electric Cooperative Association shares similar concerns, according to Rob Richard, director of government relations.

"That's electricity that could be being sold by the utility, or by the cooperative, to all the consumer members," Richard said. "If they continue to lose load — whether it's one house, 100 houses, or 1000 houses — that affects the bottom line of that cooperative. And that third-party entity is getting the advantage of providing electricity to the individual without having to compensate for the maintenance, the removal of vegetation, the lines, whatever it takes to provide electricity."

Utilities have pointed to a University of California, Berkley study that found lower income ratepayers are bearing a greater burden of energy costs — as much as $3.5 billion per year — as wealthier customers get power from rooftop solar. Another study from Michigan Tech University found utilities need to make fewer infrastructure investments and see smaller peaks in energy demand when customers with solar systems are tied into the grid.

Kenworthy said their members have a right to reduce their energy use through solar systems and "saving money does not constitute a cost shift."

Power providers argue lawmakers should decide any changes on who is considered a public utility. They contend third-party financing would reshape the state’s utility regulatory system and create a gap in consumer protections.

Even so, lawmakers like Sen. Rob Cowles, R-Green Bay, have argued that "predictions of ruin" by utilities are absurd.

"The commission can simply look across the border into Iowa, which after eight-years of third-party financing being legal, still only has around 2% of generation from distributed resources and has not marched towards retail choice and deregulation, nor have they seen reliability suffer," Cowles said in a commission filing.

Solar advocates and Richard anticipate the decision will be appealed and fought in court. The commission has yet to issue a final order.