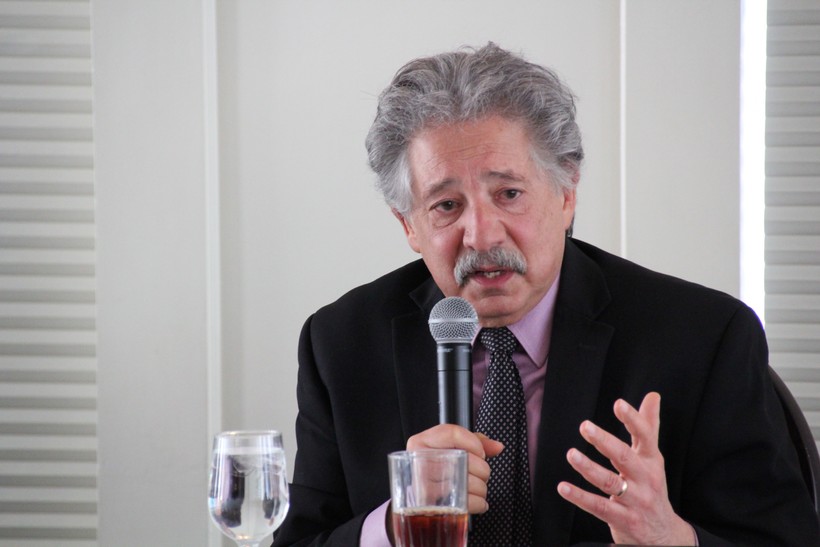 Despite A Growing Field Of Candidates, Madison Mayor Says Democratic Primary For Governor Is A 2-Person Race
By Shawn Johnson
Share:

Despite a field of candidates that continues to grow, Madison Mayor Paul Soglin says he views the Democratic primary for governor as a two-person race between himself and State Superintendent of Public Instruction Tony Evers.

His comments come at a time when at least nine Democrats are actively campaigning for the nomination, at least 15 Democrats have formally registered, and even more are hinting that they, too, could join the already-crowded primary.

The most recent Marquette University Law School poll found most Democrats expected to vote in the primary don't know enough about the gubernatorial candidates to say who they prefer. That same poll — which has a wide margin of error — found that among voters that do know the candidates, Evers came in first followed by Soglin.

At a WisPolitics forum Tuesday, Soglin said a new poll paid for by his campaign showed when Democratic primary voters know his background as Madison's mayor, they're more likely to support him.

"It's Evers and I in a horse race," Soglin said. "And anybody else is going to have to come up significantly and are going to overcome both of us."

Soglin did not release specific details about how the candidates were described in his poll, which was conducted by the national Democratic firm FM3 Research.

Soglin also spoke at length about increasing income taxes to pay for schools, his hopes to renegotiate the Foxconn deal, and his own history as Madison's mayor.

Soglin said one of the best ways to get Wisconsin back on the right track was to fund education, raising the prospects of increasing taxes at the state and local level to accomplish that goal.

"First thing we do is we remove the controls and we allow school districts to make their own decisions as to what they want to spend on education," Soglin said.

The second step, Soglin said, was to recognize what made Wisconsin schools great in the past.

"That may require an increase in the income tax," Soglin said. "And then we redistribute it to the school districts based on population and local wealth."

Asked after the forum whether voters in a general election would support his approach, Soglin said they would.

"We'll find out, won't we?" Soglin said. "I obviously think that making a commitment to education … is the wiser way to go, and the people of the state believe that, too."

Soglin said he would also support increasing the gas tax to pay for roads, saying the state needed to make investments in infrastructure if it wants to grow.

But that doesn't mean he'll end it.

Soglin said he wanted to know more about why the Walker administration agreed to the terms of the deal, which Soglin called "outrageous."

"I just wish there as a way that Walker and the people who negotiated this could just tell us what the hell was on their minds," Soglin said. "What was their reference points in terms of the economics?"

Soglin said Walker himself opened the door to canceling deals like the one with Foxconn when he rejected a high speed rail line between Madison and Milwaukee shortly after he was elected in 2010.

"I don't think it's going to be necessary," Soglin said. "If I have the opportunity, I will sit down with Foxconn and we will renegotiate and bring the agreement to scale."

Soglin said he hoped Walker would continue to talk about his record as Madison's mayor, including Soglin's decision to give Cuban Dictator Fidel Castro the key to the city.

Soglin made the gesture during a visit to Cuba in 1975. Walker has tweeted about it repeatedly.

"Bring it on," Soglin said of Walker's comments.

Soglin said that while he was in Cuba, he promoted democracy, questioning whether Walker had done the same during his trips to China.

"Tell us to what degree you challenged them on the absence of the democratic right to vote, a free press, and those kinds of issues that are fundamental to our democracy," Soglin said.

Soglin said that when voters hear about him giving Castro a key to the city, they like him more.

Soglin may view the Democratic primary for governor as a two-candidate race, but several others would beg to differ.

Also Tuesday, liberal radio host Mike Crute said he would run for governor as a Democrat, and the Milwaukee Journal-Sentinel reported that Milwaukee Mayor Tom Barrett was considering running for a fourth time.

Candidates are already circulating nomination papers to be on the ballot. Their deadline is June 1. The Democratic primary for governor is August 14.