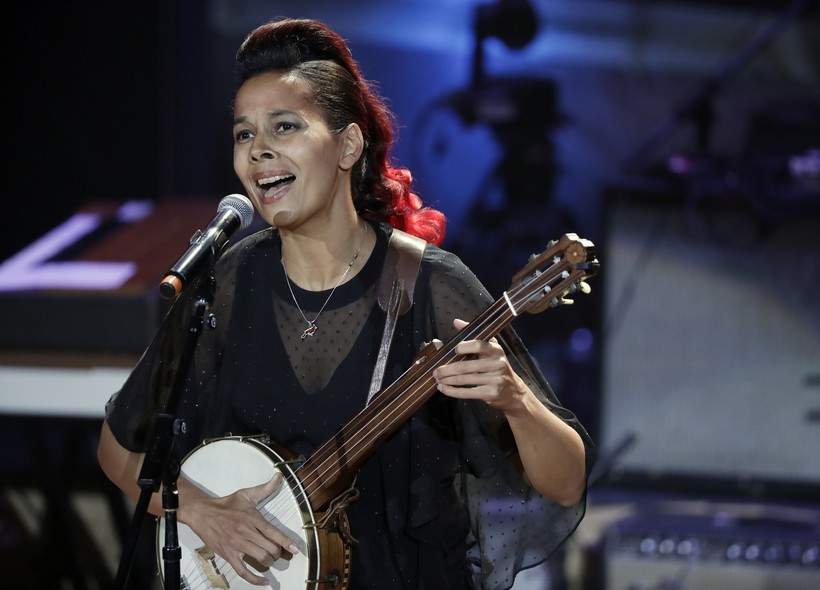 Rhiannon Giddens performs during the Americana Honors and Awards show in Nashville, Tenn on Sept. 13, 2017. As a singer, songwriter and instrumentalist, the versatile 40-year-old performer is winning accolades while casting a spotlight on African-American contributions to early American music. Mark Zaleski/AP Photo

The most powerful art speaks more than one truth, so that it continues to say something important, even with shifts in society and culture.

Rhiannon Giddens’ CD "Freedom Highway" is a powerful, and wonderful, set of songs that not only tell stories of the African-American experience in this country, but also speaks to an important cultural moment at the end of 2017.

"Freedom Highway" was released earlier this year, and the songs Giddens wrote for it are based on slave narratives from the 1800’s, the civil rights movement, and the lives of African-Americans in the 20th century.

The album exhibits her incredible musical gifts, and with these songs and stories, Giddens continues the journey she was on with the Carolina Chocolate Drops, sharing contemporary and traditional African-American music.

In an interview with the Memphis Commercial Appeal, Giddens said, "As artists, it’s our responsibility to reflect what’s going on in the culture, to be a conscience. That’s always what artists have done." And while the main focus of the album addresses the history of racism against African-Americans, there is also a set of songs that speak to this moment in our society when men are being held publicly accountable for their violent actions and harassment against women.

"At the Purchaser’s Option" is based on an ad for the selling of a woman into slavery, and the offer of her 9-month-old child to be included, "at the purchaser’s option." But the child she loves is also the result of an assault, and her response is one of defiance:

"At the Purchaser’s Option" was included in the article "Songs that say 'Me Too'" from NPR’s All Songs Considered. The article refers to the postings of women’s experiences of sexual assault on social media with the "Me Too" hashtag.

Violence against women, and a stance of dignity in the face of that violence, takes many forms. The song "Julie" is a conversation between a white slave holder and Julie, the African-American woman held in slavery. As the Union army is approaching, the white woman asks for help in hiding her money from the soldiers. Julie refuses to help her, responding:

“Mistress, oh mistress; That trunk of gold
Is what you got when my children you sold...

It’s probably no coincidence that when Giddens turns her attention to the civil rights movement, she includes "Birmingham Sunday" (written by Richard Farina). The song tells the story of the four girls who died in the 1963 KKK bombing of a church in Birmingham, Alabama.

In an album filled with powerful, and hopeful, moments, the song "We Could Fly" stands out. In it, a daughter asks her mother why can’t she fly like the birds. The mother’s response is to tell her about her grandmother:

“Daughter, dear daughter, I'll tell you something true
Remember Gran Eliza, well, every night she flew
They tried to keep her down but there was nothing they could do

She could fly, she could fly
She could slip the bonds of earth and rise so high
She could fly across the river
Her spirit in her hands
Searching, always searching for the promised land”

In the song, the mother tells her daughter that her grandmother knew the girl would fly some day, too:

“Daughter, dear daughter, listen what I say
Your granny always told me you'd feel that way some day
Every time she looked at you she saw the old-time ways”

In Giddens and her music, we can see the old-time ways as well, speaking truth beautifully and powerfully, and giving us all hope.