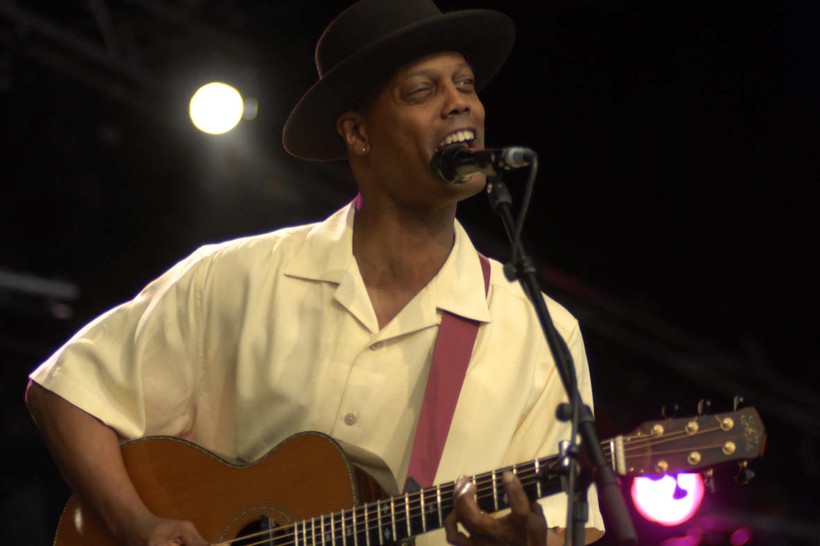 Living In Different Countries Gives Bibb Empathy That Comes Out In Album
By Dan Robinson
Share:

A citizen of the world.

That’s how Eric Bibb refers to himself in the liner notes to his latest album, "Migration Blues."

Bibb grew up in the United States, and has lived in many different countries in Europe, as well as traveled around the world. A lifetime of movement gives him empathy that comes out powerfully in the album, a collection of songs that examines the lives of migrants moving from Africa and the Middle East to Europe, from Canada and Mexico to the U.S., or from one part of America to another.

Musically, the album is wonderful, with a great trio of Bibb, Michael Jerome Brown, and JJ Milteau at the heart of it playing some incredibly strong acoustic blues. In fact, the album is nominated for a Grammy in the Best Traditional Blues category. But from the first words of the first song," Refugee Moan," we know we are in for a real journey, rough as well as beautiful:

If there’s a train that will take me there
Take me where I can live in peace
Oh, Lord, take me onboard, don’t leave me here
Let me ride that train.

While Bibb wrote or co-wrote most of the songs on the album, he does some wonderful covers, like Bob Dylan’s "Masters of War" and Woody Guthrie’s "This Land is Your Land." He also includes a song written by B.A. Markus and M.J. Browne written especially for the album, "Four Years, No Rain." In his liner notes, he writes that the song "says it all."

Powerful stories of individuals are peppered throughout the tracks, like "Diego’s Blues," which tells the story of Mexican workers who migrated to the Mississippi Delta during the 1920s. But Bibb also notes that people are often forced to move from their home by forces beyond their control, as is the case with war. In the middle of the album is a three-song cycle that includes "Four Years, No Rain" ("War in my country; War is my hometown…"), Dylan’s "Masters of War," and a song that Bibb wrote, "We Had to Move."

Buildin’ bomb factories
Stretchin’ ‘cross the three counties — had to move
Everybody had to pack an’ go
‘Cos the gov’ment said so — we had to move.

The journey is rough and the outcome unsure, Bibb seems to say. On the one hand, hope is possible and needed.

In a video on the making of the album from DixieFrog, Bibb says, "If we could put ourselves in somebody else’s shoes, somebody who’s trying to escape a situation that is unlivable, I think, if we could extend our hearts to those people and realize that it could be us, we are going to be better human beings and we are going to create a better world."

That sentiment is reflected in the song, "Brotherly Love."

I believe we can save our ship
‘Though it’s sinkin’
I believe we can change
The way we’ve been thinkin’
An’ before it’s too late, replace fear an’ hate
With brotherly love.

But the album’s last track, the traditional African-American spiritual, "Mornin' Train," seems to say that the migrants’ home and peace may only be found in the next life.

The album takes the listener on a journey, maybe ending up where we began, riding a train that we all share. But the last words of Bibb’s liner notes may be the last word of the album.

"With this album I want to encourage us all to keep our minds and hearts wide open to the ongoing plight of refugees everywhere. As history shows, we all come from people who, at some time or another, had to move."