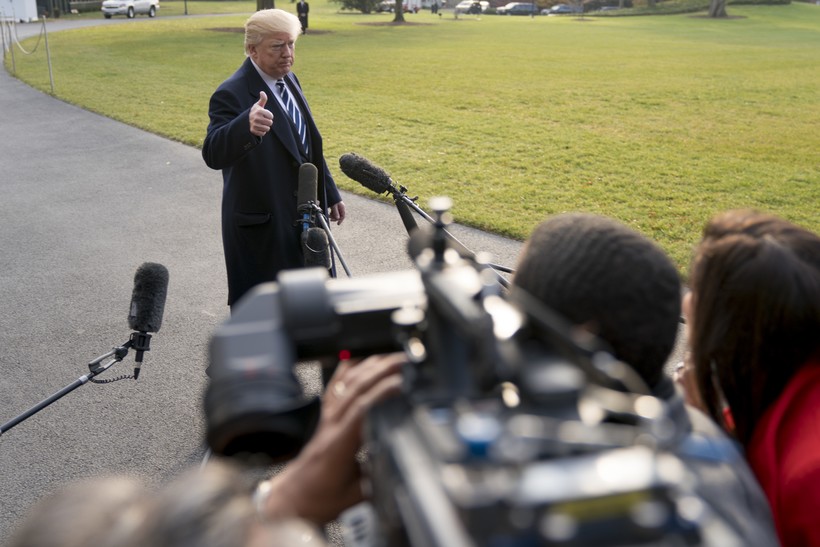 President Donald Trump speaks to members of the media before boarding Marine One at the White House, Saturday, Dec. 2, 2017, in Washington. Trump is traveling to New York for a fundraising event. Andrew Harnik/AP Photo

A Look At Recent Media Coverage Of The Trump Presidency

A new poll shows that most supporters of President Donald Trump agree with his statement that the media is “the enemy of the American people.” We discuss what’s driving the sentiment and examine recent media coverage of Trump and his administration.

According to research from YouGov, the anti-media feeling was shared by more than 60 percent of those who said they approve of Trump. In terms of party lines, just 19 percent of Republicans or those who lean Republican say they have at least “a fair amount” of confidence in the press. Among Democrats or Democratic-leaning respondents, 74 percent said they feel that way, a 23 percent jump from last year.

In February, Trump tweeted that the “fake news media” - referring to the New York Times, NBC, ABC, CBS and CNN - is “the enemy of the American people.” He’s sparred with the media during his candidacy and throughout his presidency so far.

How do you rate the media coverage of the Trump presidency? Has it generally been fair or hostile? Do you see it as the enemy of the American people? What’s your take on the Brian Ross story? Weigh in at 1-800-642-1234 or ideas@wpr.org. You can also tweet us @wprmornings or post on the Ideas Network Facebook page.