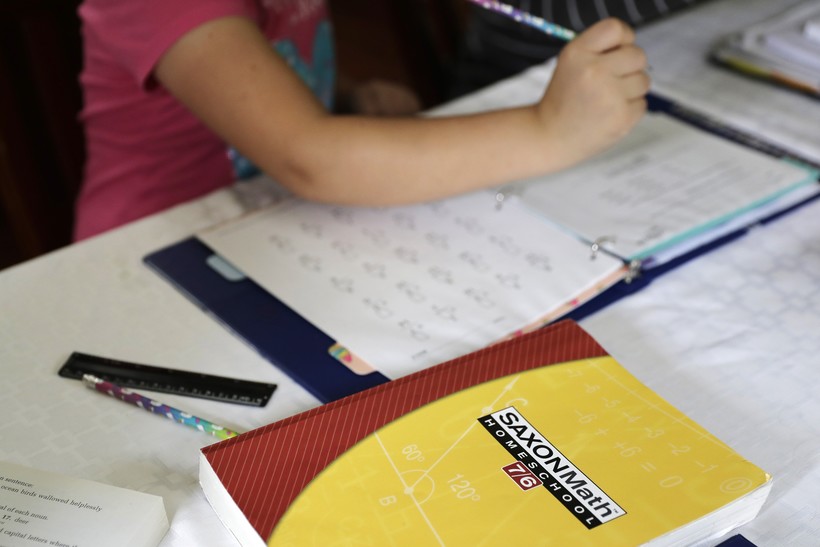 In this Oct. 9, 2019 photo, a homeschool math textbook rests on the table where Mabry Grant, 8, works on a lesson with her mom, Donya Grant, at their home in Monroe, Wash. Ted S. Warren/AP Photo

Should 'Micro Schools' Be Allowed Under Wisconsin Law?

A Wisconsin lawmaker is looking to create an education option in the gap between single-family home schooling and traditional schools.

Current law only allows a parent or other home school teacher to teach students who are part of the same household. But under a proposal from state Rep. Shae Sortwell, R-Two Rivers, up to 20 students who aren't related could learn together under the guidance of one teacher as part of a so-called micro school or learning pod.

This method of teaching has gained traction as a result of COVID-19 school closures, but Sortwell says a law change is needed to make sure students learning under these types of arrangements are getting credit under state education requirements.

Some organizations have come out against the proposal, including the Wisconsin Home Schooling Parents Association, which contends these micro schools should be treated the same as private schools under state law.

In an interview on WPR's "The Morning Show" with Lee Rayburn, Sortwell discussed his bill and reasons for his support.

Lee Rayburn: What inspired you to write this legislation?

Shae Sortwell: This has been an issue that's been out there for a number of years because of the way that the Wisconsin home school law is written — that some people have tried to kind of work more collaboratively with other parents — and they're actually fairly limited in what they can and cannot do legally and still count it towards the education of their children.

Under Wisconsin law, there's a set number of hours of education required to be provided — in this case, 875 hours (per academic year) for home schooling.

If you want to work cooperatively and collaboratively with other parents through the home school law, it's actually fairly restrictive because of Wisconsin's "one family rule," which means a teacher can be teaching only one family at a time.

So, I myself as a parent could home school my kids, or I could hire someone to do that. But let's say I want to send my kids over to my brother's house for home school. He couldn't teach both his kids and my kids and count those towards the 875 hours that are required under the law.

This is going to work for people who maybe can't make the traditional home schooling model work. They need to work more with other parents, maybe for scheduling purposes or maybe because they don't feel comfortable teaching certain things.

We saw a lot of people look for alternatives in 2020 because they didn't want to do the virtual learning that was happening in many school districts across the state, or because they saw that it wasn't working for their children.

LR: The bill says that it treats micro schools in the same manner that home-based private educational programs are treated under Wisconsin law. Why treat micro schools the same way you would treat a home school?

SS: If you have something that's working and working fairly well, why reinvent the wheel? I looked at it as something that had very limited regulation, and the idea was to allow as much flexibility and as much cooperation as possible between parents. I said, 'OK, let's limit this in size and the amount of families that can be involved but allow them to basically work this out in a way that works for them.'

LR: Where is this legislation currently in our state Legislature?

SS: We had a hearing in the state Assembly education committee. We haven't had a hearing over the Senate yet, but we had some support come in from people.

I am talking with some of my colleagues and trying to figure out what it's going to take to get support, because it's a somewhat new idea for the state of Wisconsin. And so some people are a little bit skeptical about it. But, you know, for instance, one of them asked if maybe we could sunset this proposal so that we could revisit this in two or three or four years and say, 'Hey, is it working? Are we having problems? Are you open to that?' I am.

I actually wrote the amendment for that and say we could sunset it. And then if we want, we can revisit this in two years. And if there are problems, we can either change it or maybe say, 'Look, we shouldn't have done this, and we're not going to do it again.' But that's where we're at right now. I'm just trying to make sure we've got to move it through the education committee.

Another Education Option: New Bill Could Expand School Choice To Include 'Micro-Schools' 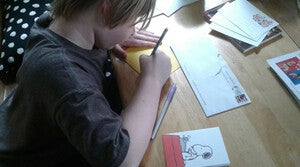 Some parents turned to learning pods and micro-schools as an alternative to virtual learning during the pandemic. These small groups of students receive instruction from a parent or designated teacher similar to home schools. We talk with the author of a new bill that would recognize micro-schools as an option for families.